Sometimes, the best ‘backcountry’ trips are the ones hidden just beyond civilisation. This is certainly true of the five days we spent kayak camping on Wallace Island, British Columbia.

This long and thin landmass lies less than 2km off Salt Spring Island (which, in turn, is just beyond Vancouver Island) and is one of the most idyllic places I have ever been.

Plan your own trip to paradise with the following experience and trip planning guide.

This post includes affiliate links. If you make a qualifying purchase via one of these links, I may make a small commission on the sale at no extra cost to you.

Stumbling across Wallace Island while searching for kayak trip ideas, I was amazed to find such a beautiful place to be so reasonably accessible.

We planned a five day trip, planning to basecamp at one of the island’s three campgrounds and explore the area from there. Read on to discover a comprehensive planning guide, preceded by our own trip report.

With a never ending forecast of 23c degree sunny days (in May!), our kayak trip to Wallace Island was looking fortuitous before we’d even left shore. The wind was also agreeable, allowing for an easy paddle across from Salt Spring to the shore of Wallace Island.

As we pulled our kayaks onto the beach just alongside Chivers Point at Wallace Island’s most northern tip, I couldn’t believe we’d arrived less than two hours after launching from Hudson Point.

And the campground location was better than I imagined – an easy, sheltered beach landing with crystal clear water and a glimpse of empty tent pads and picnic tables through the trees.

Scrambling up onto the point itself, the view almost blew both of us away. We could see for miles, the horizon studded with islands and boats. I knew immediately that this was going to be a great trip. The rose coloured sunset that night just confirmed it.

Wallace Island may have felt like a secluded paradise made just for us, but a trip to Conover Cove the next day taught us a different side to the story. Following the forested hiking trail through the centre of the island, we eventually found a sunny meadow, punctuated by a rusting truck.

A vehicle is a curious sight anywhere without roads but especially so when the truck in question is almost certainly 50 years or so old! Further along the path, the trees opened up even more to reveal a handful of buildings as well as a boat dock.

David and Jeanne Conover used their life savings to purchase Wallace Island in 1946 and turned it into the ‘Royal Cedar Cottages’ resort. David became a successful author after writing a trilogy of books (starting with ‘Once Upon an Island‘) about their struggles and triumphs as island owners.

A BC Parks map indicates the former layout of the Royal Cedar Cottages resort, with 23 different structures scattered around the area. One of the cottages still standing is the Conover’s, still keeping watch over the anchored boats in the cove.

I’m forever fascinated by the amount of places in British Columbia that have been developed so relatively recently but have since been abandoned or returned to the earth. Wallace Island is a good example.

The former resort area is now a spacious tent campground and day use area for boaters. A shelter almost completely covered in carved driftwood affirms how much this island is beloved by visitors.

Before heading back our campsite, we continued a little further to the most southern part of the park – Panther Point. The merchant coal carrier HMS Panther ran aground here in 1874. No wreck is visible today, only spectacular views towards Salt Spring Island.

The next three days leisurely passed with a mixture of sunbathing, kayaking, fishing, crabbing, reading and sunset watching. Oh, and how we ate! Fresh crab, rock fish, oysters and more, all under an endless blue sky.

With the weather being so unexpectedly predictable, we were able to do something we’ve never been able to do on any camping trip – sleep with the tent fly off! We had four nights of blissful sleep on Wallace Island, with just a mesh cover separating us from the trees above. Waking up to see the ocean right there was a truly a special thing.

Besides a smattering of kayakers and few dozen sailors (pun totally intentional) on the first few days, we saw hardly anyone. No whales were anywhere to be seen either, but that is always hit and miss.

Whales or not, I’d still consider our luck to have been in for this kayaking trip. I could’ve have picked a better place to be and the weather seemed to reward us. We were sad to leave, wanting just one more day (or two, who am I kidding?) of solitude and relaxation on what felt like our own island.

Choosing to paddle back via Jackscrew Island, we came across a huge pod of seals resting on the coast of the most southern Secretary Island. Despite keeping our distance, dozens scrambled into the ocean and proceeded to follow us on our journey.

Inquisitive seals are not uncommon but when approaching kayakers yelled to us ‘do you know how many seals you have following you?!’ it became apparent that this pod was a little curious than the average.

Agile, incredibly fast and remarkably large, seals are actually quite intimidating when sitting in a kayak. I love to watch them from a distance but it is always a little startling when they resurface less than a metre away! Luckily, they lost interest as we approached the shore of Salt Spring Island.

With friends waiting for us at Fernwood Cafe just down the way, we landed and packed up as fast as we could. It was JR’s 40th birthday and plenty of good food and merriment was waiting. With almost a week of bliss on Wallace Island and a day of celebrations on Salt Spring, that birthday will be a hard one to beat.

A Paddling Guide to Wallace Island

If you’re planning a kayaking trip to Wallace Island, keep reading to discover everything you need to know. I’ve written this section with overnight paddlers in mind, though I think day trippers will still find this section helpful.

When heading out on any kayak trip, be sure you bring the 10 essentials, tell someone where you’re going (and an anticipated return time) and be careful to leave no trace of your visit. Help us keep nature beautiful!

A brief history of Wallace Island

The name we now use is in honour of Captain Wallace Houstoun who first surveyed the area in the 1850’s. He originally named it ‘Narrow Island.’ The first known resident was Jeremiah Chivers, a Scotsman who lived alone on the island until his death in 1927 at the age of 92.

In the mid 1960s, the Conover family sold 94% of the island’s acreage to a group of teachers from Seattle. Unfortunately for them, island ownership didn’t prove to be a successful venture with internal disputes preventing any development.

Wallace Island was up for sale again in 1990 (this time by court order) and became a marine provincial park with the help of the volunteer run BC Marine Parks Forever Society. 6% of the island (11 of 180 acres) remains private land.

How to get to Wallace Island

Wallace Island is located in the Trincomali Channel between Galiano Island and Salt Spring Island. All three islands are found in the Salish Sea between Vancouver Island and the British Columbia mainland.

Some of the ferry services on the Tsawwassen to Salt Spring Island route are non-stop while others stop at other Gulf Islands (Galiano, Mayne, Pender) first.

A BC Ferries Experience card offers a discount on all three of the above routes. To receive the discounted fare, you must load a minimum amount of dollars on the card before using the ferry.

The two most convenient kayak launching sites for Wallace Island are Hudson Point and Southey Point on Salt Spring Island. There are other options for launching on Salt Spring but these two are the closest and make the paddle across both short and straightforward.

Hudson Point is a public boat ramp located on North Beach Road, Salt Spring Island and seems to be the favoured launch for kayaking to Wallace Island. The shortest paddling distance to reach the shore of Wallace Island is around 2km, a quick half hour paddle in calm conditions.

The easiest way to find Hudson Point is to head to the Fernwood Cafe and then follow the road north until the gap in the trees appears after around 1km. There is off road parking for four or five small vehicles.

At low tide, the beach is quite extensive and provided us with plenty of space to load the kayaks onto the van. This launch can apparently get quite busy with sport fishermen. North Beach Road is quiet and we had no issues with security, though I’d recommend not leaving any valuables in your vehicle.

Somewhat confusingly, Southey Point is actually the most northern tip of Salt Spring Island. Follow North End Road to Southey Point Road and then finally onto Arbutus Road. Southey Point can be found at the end of this road. The launch is on a small wedge of stony beach.

From Southey Point, the paddle to Wallace Island skirts Jackscrew Island as well as the southern Secretary Islands. Be considerate with parking to ensure that this launching point remains possible for kayakers.

Camping fees on Wallace Island are $5/per person/per night. Fees apply year round. There are self registration vaults at all three camping areas (cash only). I personally consider it a steal of a deal!

Approximate hiking distances between the campgrounds are:

The Conover Cove campsite is located at the southern end of the island, in the old resort area. It is a large grassy, open area with views towards Salt Spring Island. Conover Cove is a popular anchorage for boats and there is a dock leading to land here.

The smallest campground on Wallace Island, Cabin Bay is on the northeastern coast. There are lovely views across to Galiano Island and beyond. I imagine the sunrises could be very pretty to watch here.

Chivers Point is definitely my favourite Wallace Island campground. Being the northwestern tip of the island, Chivers Point offers beautiful views along the Trinocomali Channel and across to Galiano Island, as well as spectacular sunsets. It is named after one of the first residents of Wallace Island.

Wallace Island is an awesome paddling destination (especially for multi-day trips) but there’s a few things you should know before you go:

Other fun things to do around Wallace Island

Besides providing a launching point for beautiful Wallace Island, Salt Spring Island has plenty to offer visitors. Here are a few of my favourite activities:

Planning more adventures on British Columbia’s coast? You may find these posts helpful

How to Find Big Trees on Vancouver Island, British Columbia

25+ of the Best Campgrounds on Vancouver Island

A Guide to Hiking the Sunshine Coast Trail, British Columbia 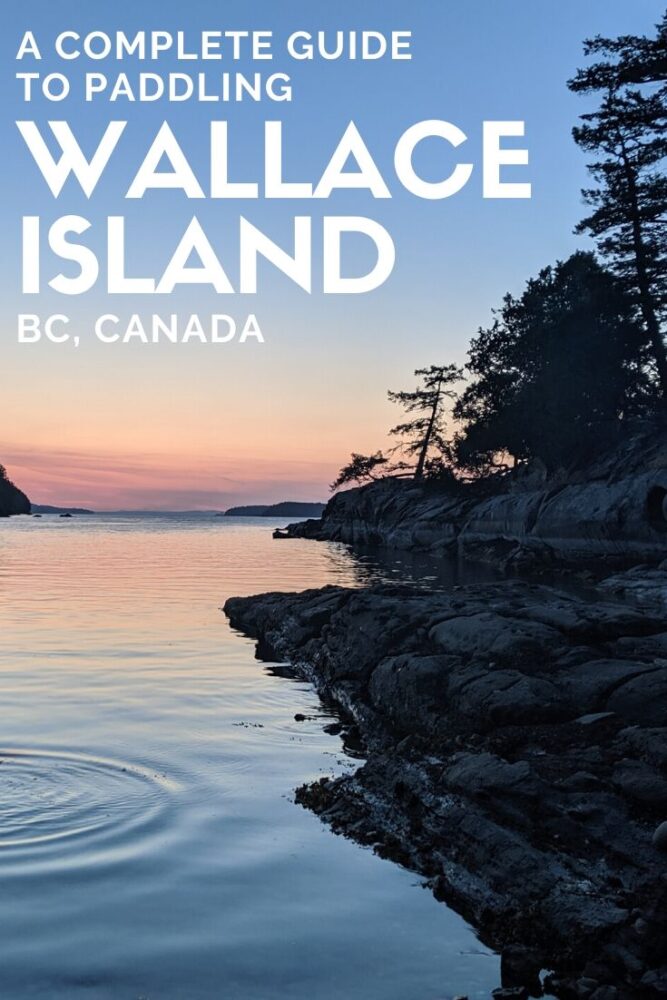 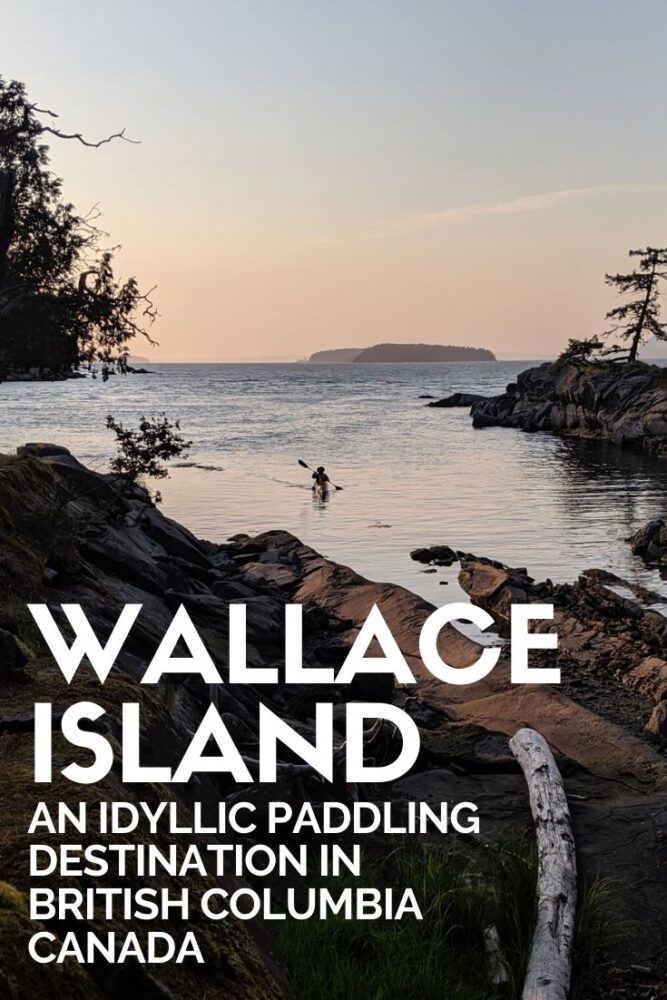 Vancouver vs Calgary For Your Working Holiday in Canada

25+ of the Best Campgrounds on Vancouver Island, BC