Cape Breton’s Fishing Cove trail is a 12km out and back hike, easily accessible from the beautiful Cabot Trail. It can be completed as either a day hike (4-5 hours) or an overnight backpacking trip.

After being so impressed by our first Nova Scotia backpacking experience, I set out in eagerness to find out more options. I was surprised to find the choice of only one in the Cape Breton Highlands but surmised that it must be quality over quantity.

The Fishing Cove trail may be short but it offers a very approachable and rewarding backcountry experience. For what it lacks in true wilderness, it makes up for with raw charm.

To add to this, the Fishing Cove itself offers what must be one of the best of Cape Breton’s campgrounds.

Read on for our own experience on this lovely little trail plus everything you need to know to hike it yourself. 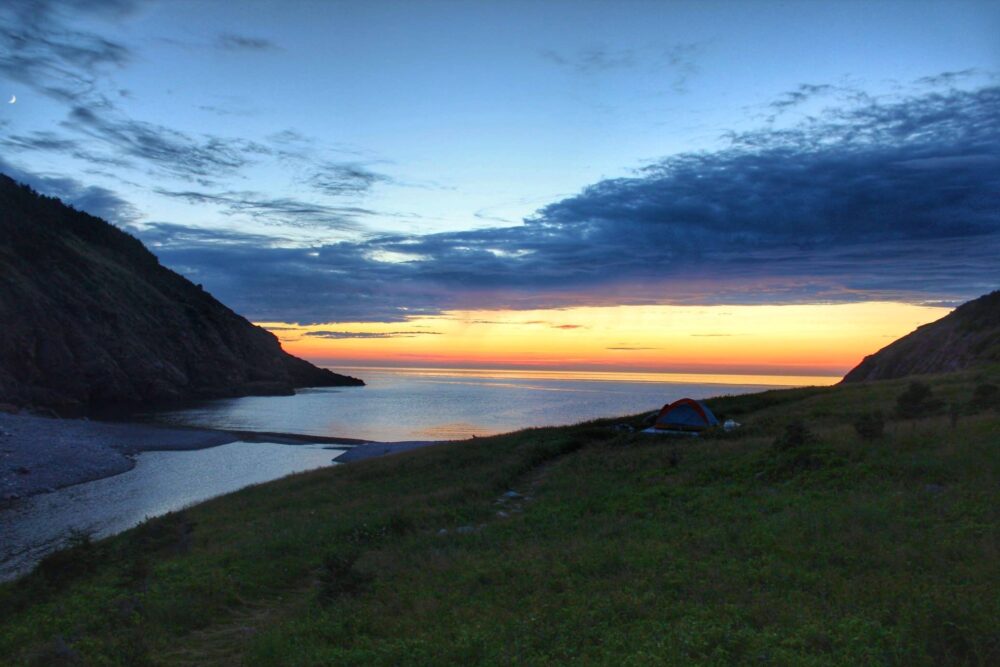 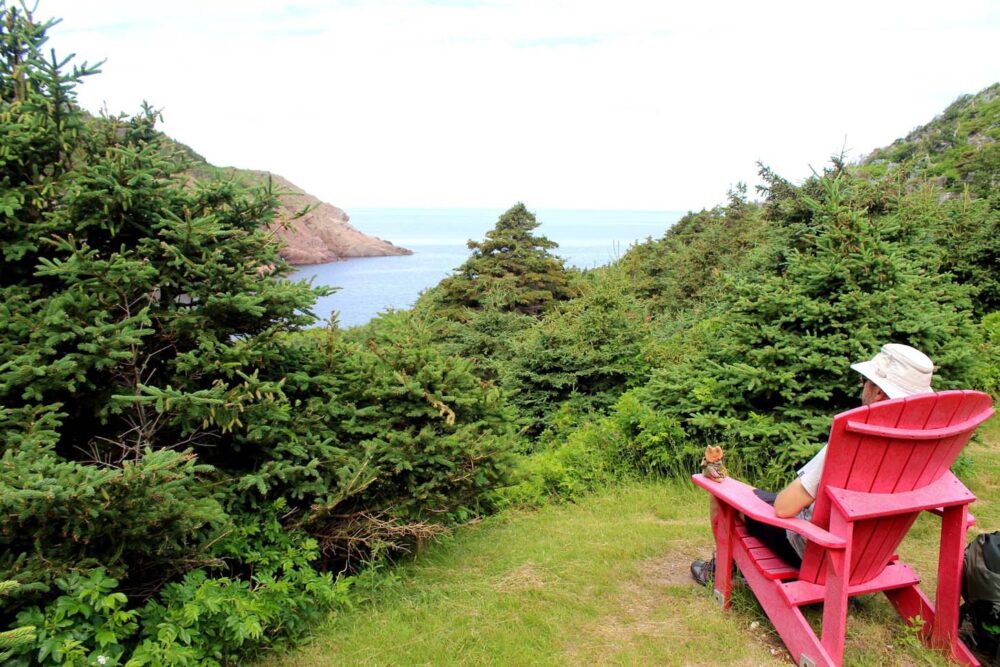 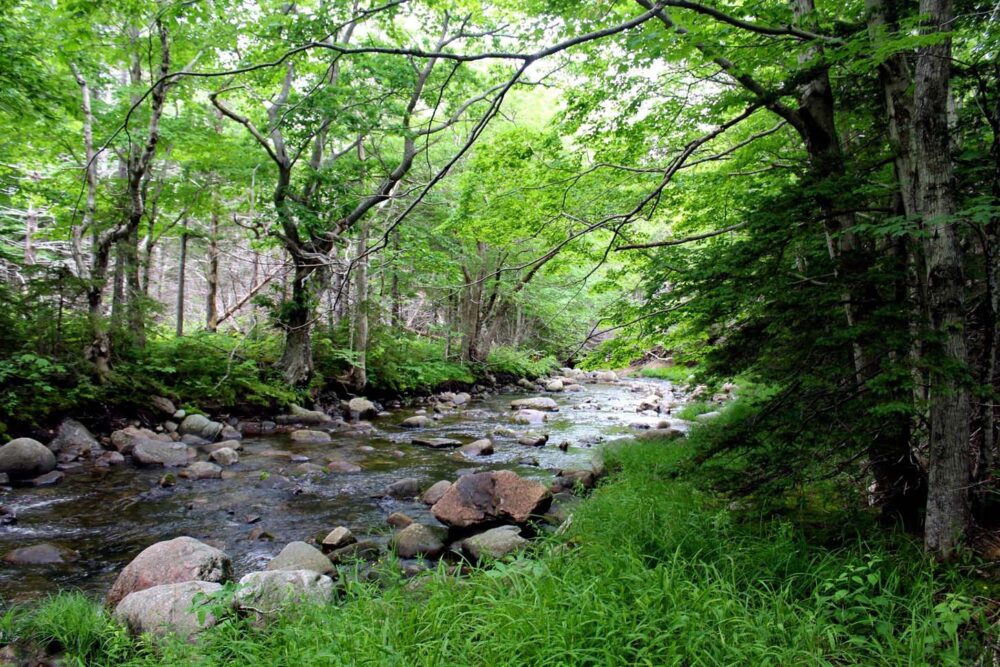 The Fishing Cove trail is as pleasant as it is straightforward. A few obstacles here and there, but in general the narrow path is a fun little jaunt through the woods.

The trail starts with a fairly steep, wide descent (something that always makes me dread the return journey) before fully entering the Acadian forest. At the valley floor, it meets a meandering creek which runs roughly parallel to the rest of the journey.

The biggest surprise of the hike was a sizable garter snake, sunbathing on a rocky section of the trail. I say surprise, but by this point, we had actually encountered some kind of snake on every single hike in Nova Scotia. Seeing wildlife on a trail is always a joy but snakes always give me that second of fright for whatever reason.

Leaving the garter snake to his spot of sun, we continued on along the creek. The sound of the water rushing over the rocks and other debris provided a soothing soundtrack for the rest of the hike.

When the creek veered away a little I almost began to miss it before realising that the trail was at the end. We had arrived at the cove! The forest opened up quickly, revealing a wide meadow.

Read next: 6 Fast and Fun Hikes in Nova Scotia, Canada

The tall grass of the meadow hid the view until we crested a small hill. The calm waters of Fishing Cove came into sight, bordered by rocky cliffs. Despite the moody skies, a glow at the horizon held the promise of the clouds lifting a little.

Being that we left reasonably late (3pm), we weren’t surprised to see two other tents already set up on the wooden pads. It was no matter, there was still a great spot left with a stunning panoramic view.

Fishing Cove was once the home of a few Scottish families who traded with the French for supplies. There was also a lobster cannery here, though it is hard to tell.

It is apparently possible to see some of the remains but we didn’t have any luck on our visit. It must have been quite the life out here, perched on a little piece of paradise surrounded by the ocean and valley walls. 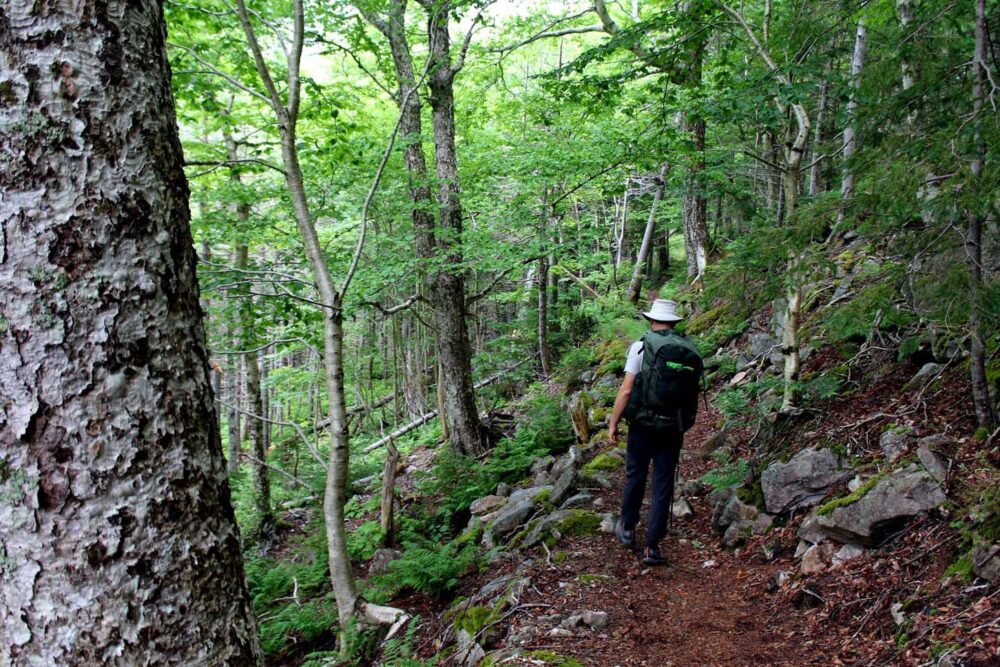 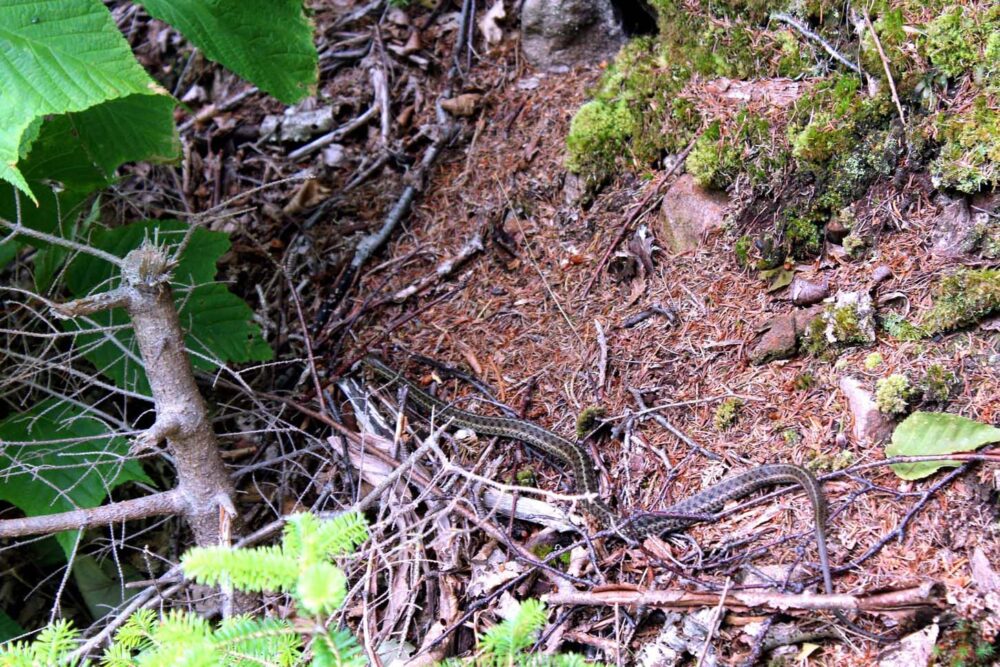 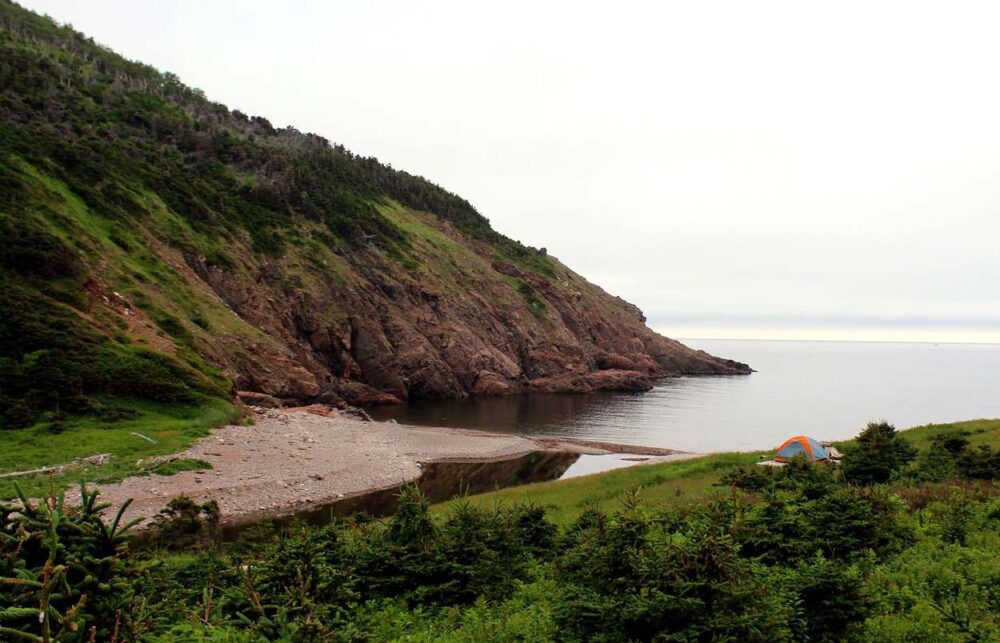 The Fishing Cove backcountry campground is the only designated wilderness camping area in Cape Breton Highlands National Park. For this reason, it offers a Cape Breton Island camping experience not quite like any other.

The first thing you’ll probably notice is how quiet it is. The Cabot Trail is far away, at the top of the valley. The cove faces into the Gulf of St Lawrence, a waterbody much calmer here than on the other side of the island. The ocean laps onto the stony beach with barely any waves.

Few boats venture into the cove itself, usually passing further out to sea. The river reflects the luscious green valley slopes and the sky beyond.

In the late evening, the sun sinks in the ocean opposite the cove. It’s the perfect curtain call on a great afternoon of hiking.

There isn’t a lot to do at the Fishing Cove campground but that is part of the beauty of it. It forces you to slow down and just appreciate the surroundings. It’s an ideal place for a night in solitude.

Is Fishing Cove one of the best Cape Breton campgrounds? You bet. If you can, I’d definitely recommend starting the Fishing Cove trail just after lunch and staying overnight.

The Fishing Cove trail: Everything you need to know

Want to discover the Fishing Cove trail for yourself? Read on for everything you may want or need to know about this 12km return hike.

This trail guide includes some affiliate links. If you make a qualifying purchase through one of these links, I may receive a small percentage of the sale at no extra cost to you.

The Fishing Cove Trail provides a straightforward hiking trail with little technical difficulty. This makes for an easy, enjoyable trail, particularly if done as an overnight backpacking trip.

The main challenge is the 355m descent (and later, ascent) at the beginning of the trail. Being an out and back trail, there are no surprises on the return journey.

The route starts with a wide trail leading away from the parking lot. After descending a couple of switchbacks, the trail narrows and drops into the valley.

Once most of the elevation has been lost via a few more switchbacks, the trail flattens and winds along the creek. It stays close for the remainder of the journey, occasionally rising and falling to avoid obstructions.

The trail to Fishing Cove is generally clear and undemanding to walk, with some rocky sections. The route was well maintained.

We encountered a little bit of mud during our mid-July hike, but not enough to get our shoes wet. There are kilometre markers along the entirety of the Fishing Cove trail. 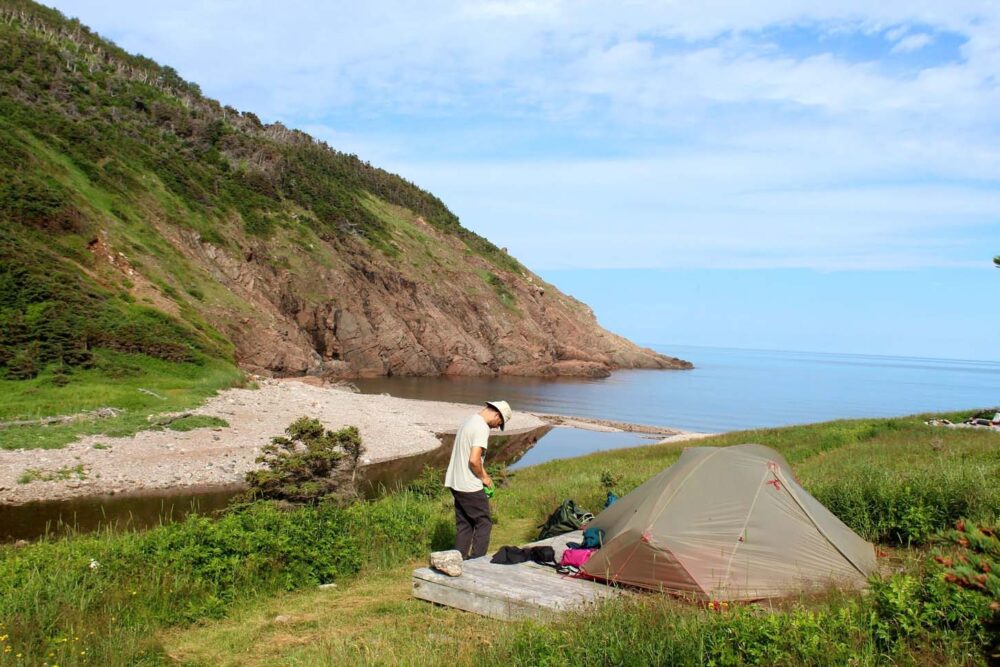 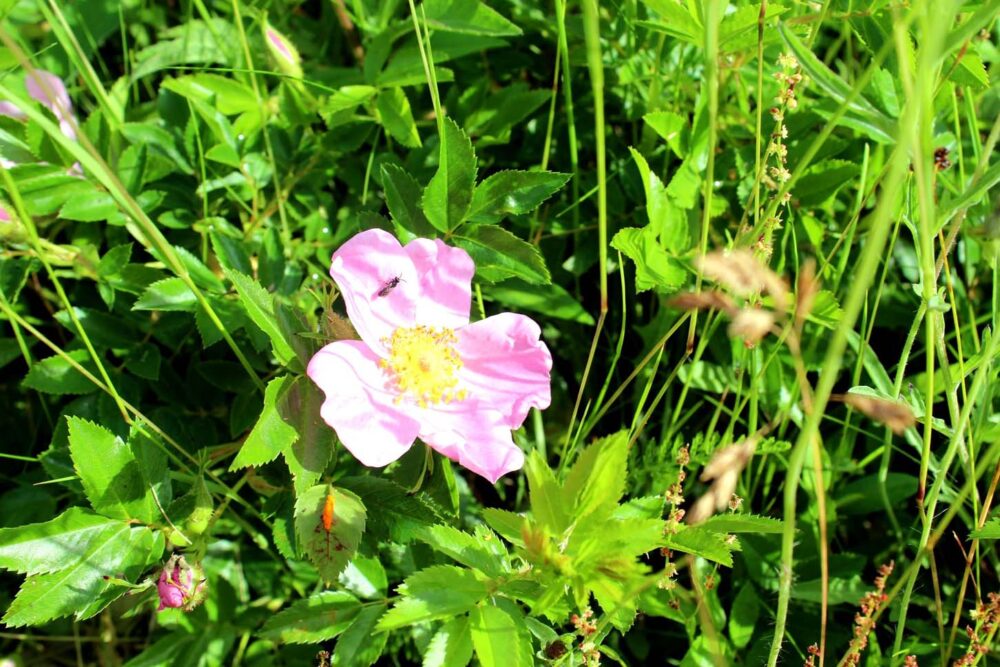 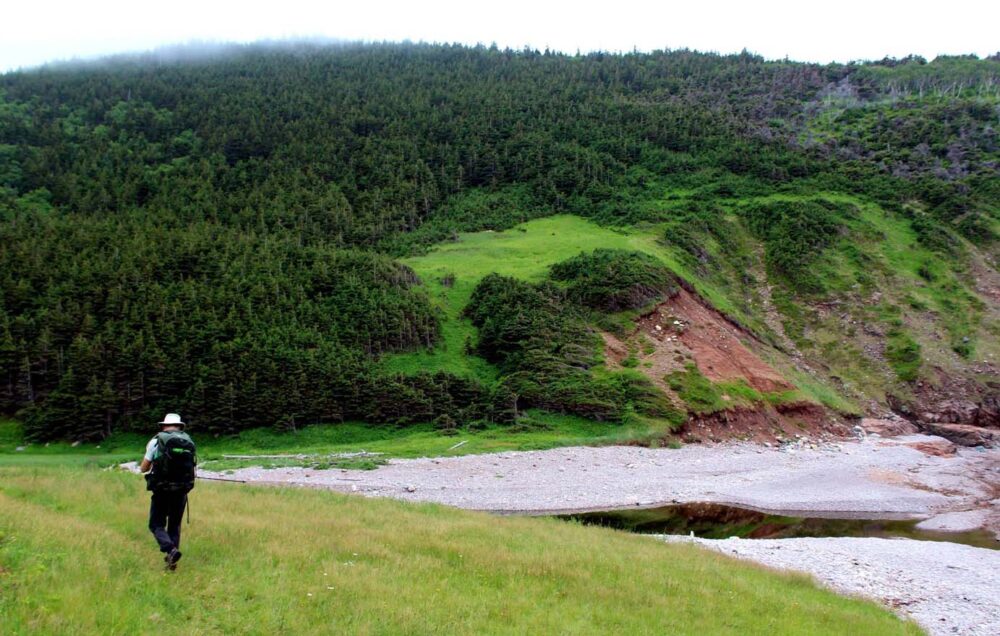 Hikers wanting to stay overnight at the Fishing Cove campground must have a Cape Breton Highlands National Park backcountry permit issued by Parks Canada. Wardens do check the vehicles left at the trailhead to ensure hikers have the appropriate permits.

Since there are a limited number of tent pads in the campground, there is a maximum number of permits issued every day. Hikers must register at either the Chéticamp or Ingonish Visitor Centres to receive a Fishing Cove backcountry permit.

Fishing Cove hosted two other couples during our July visit, a number that the parks staff told us was a little less than usual for summer.

Online reservations are not possible but it is possible to visit one of the Visitor Centres a few days in advance and reserve in person.

The backcountry camping fees in Cape Breton Highlands National Park are $9.80 per person. A National Park entry pass is also required, which is $7.80 per person, per day. If you are travelling for several weeks in Nova Scotia or elsewhere in Canada, I’d recommend getting a Parks Canada Discovery Pass.

How to get to the Fishing Cove trailhead

The start of the Fishing Cove trail is 24km north of the Chéticamp Parks Canada Visitor Centre. The trailhead parking is in a pull out directly on the Cabot Trail.

The Fishing Cove route starts immediately, just to the right of the Parks Canada information signs.

Ingonish is 83km away, on the other side of the Highlands National Park. The drive takes around 80 minutes with no stops (but who wouldn’t stop on the beautiful Cabot Trail?!)

It is worth noting that there used to be another Fishing Cove trailhead, a little further north along the Cabot Trail. This provided a shorter and steeper hike into Fishing Cove.

This alternative route has been closed within the last few years and removed from the map. Some online trip reports still refer to this trail.

Read next: A Week in the Wilderness of Kejimkujik National Park, Nova Scotia 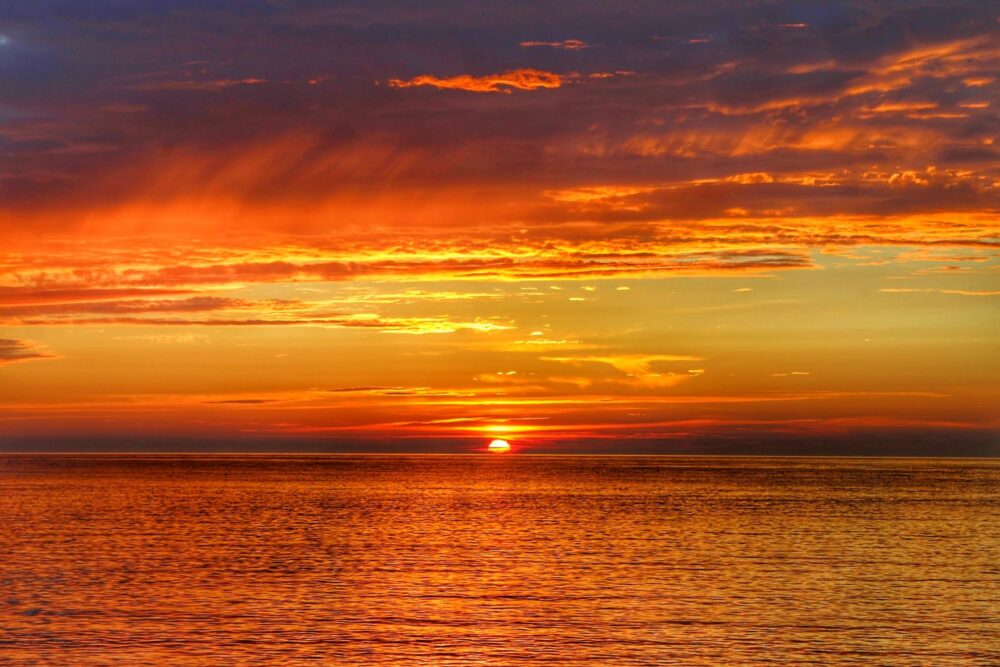 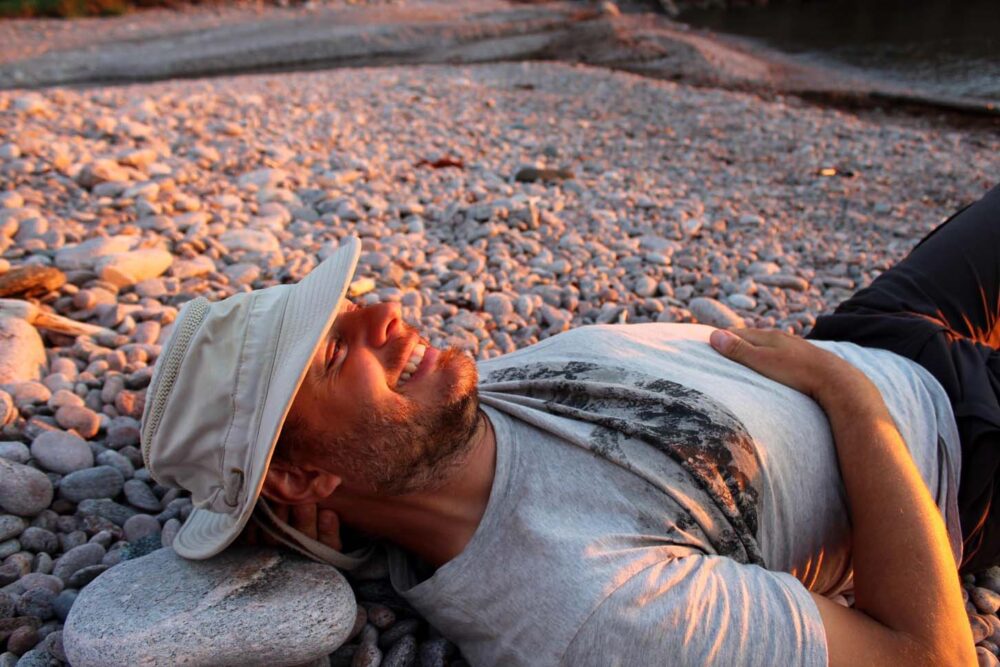 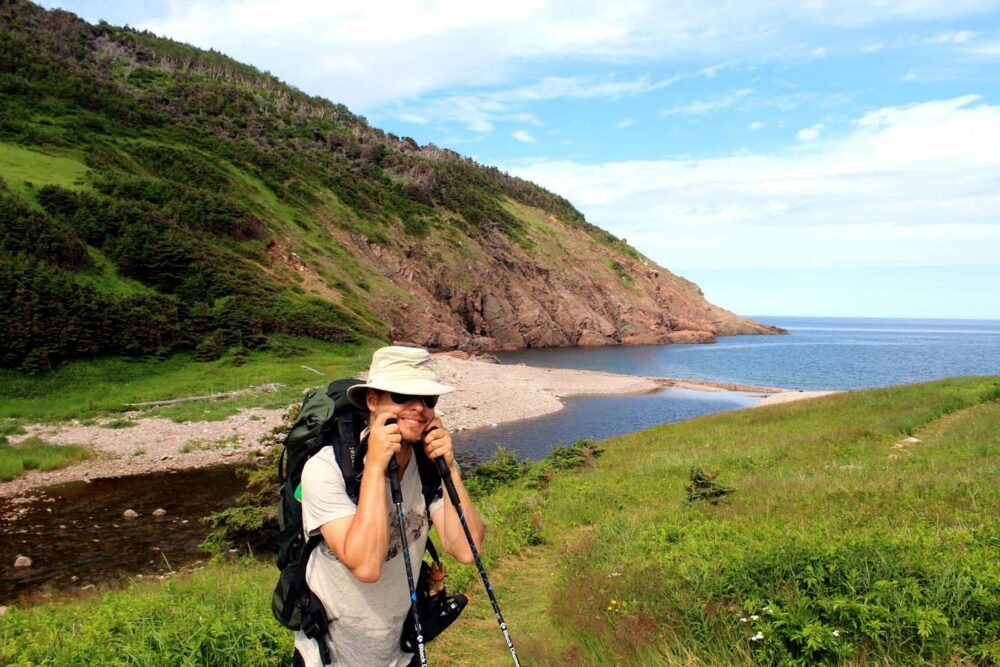 What to bring to Fishing Cove, Cape Breton

When hiking the Fishing Cove trail, you may want to keep in mind:

The Fishing Cove campground has eight tent wooden tent pads, one outhouse (a porta potty when we were there) and a couple of iconic Parks Canada Adirondack chairs.

All of the tent pads are separated for a fairly decent level of privacy, especially those set further back from the ocean. There is a short trail to the beach from the closest tent pad.

Hikers should be aware of the presence of moose, bears and coyotes in the Cabot Trail area. Always stay alert, make noise and do not approach wildlife.

There are several bear poles next to the outhouse in the campground – be sure to use them for proper food storage.

Campfires are not allowed at the Fishing Cove campground. 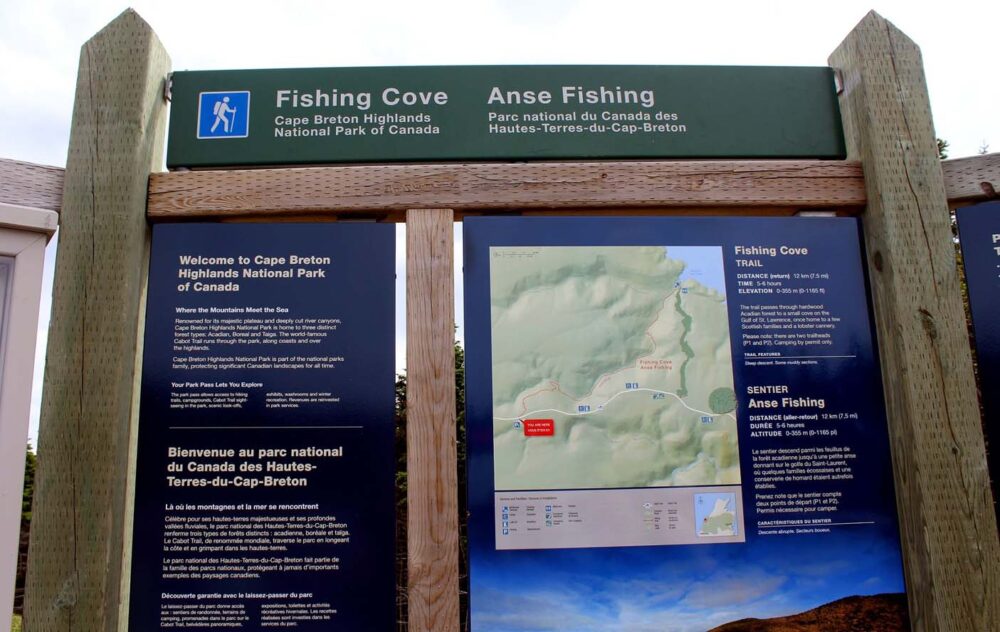 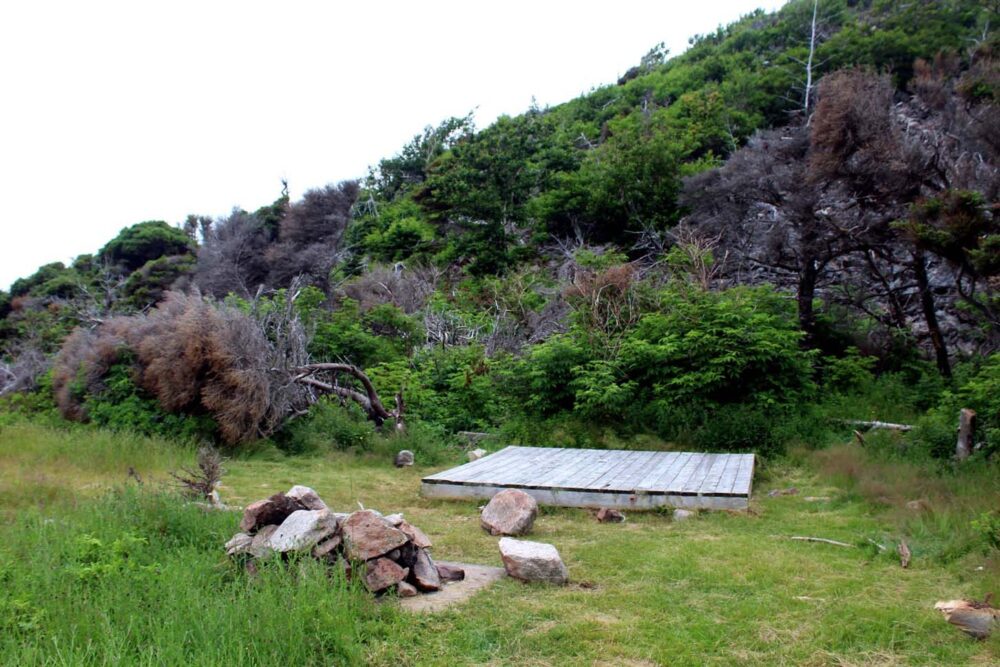 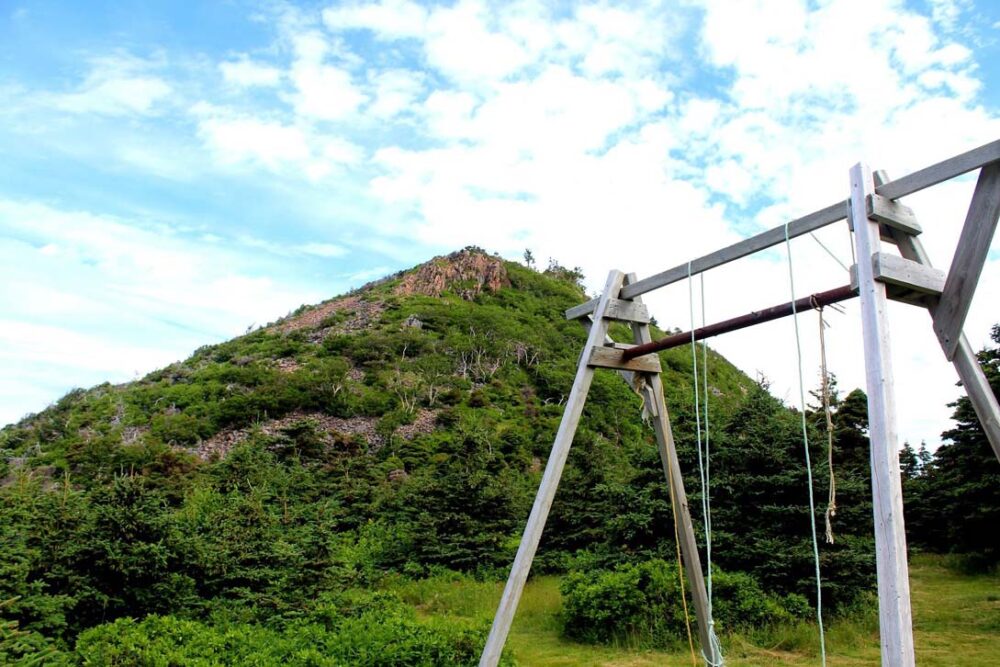 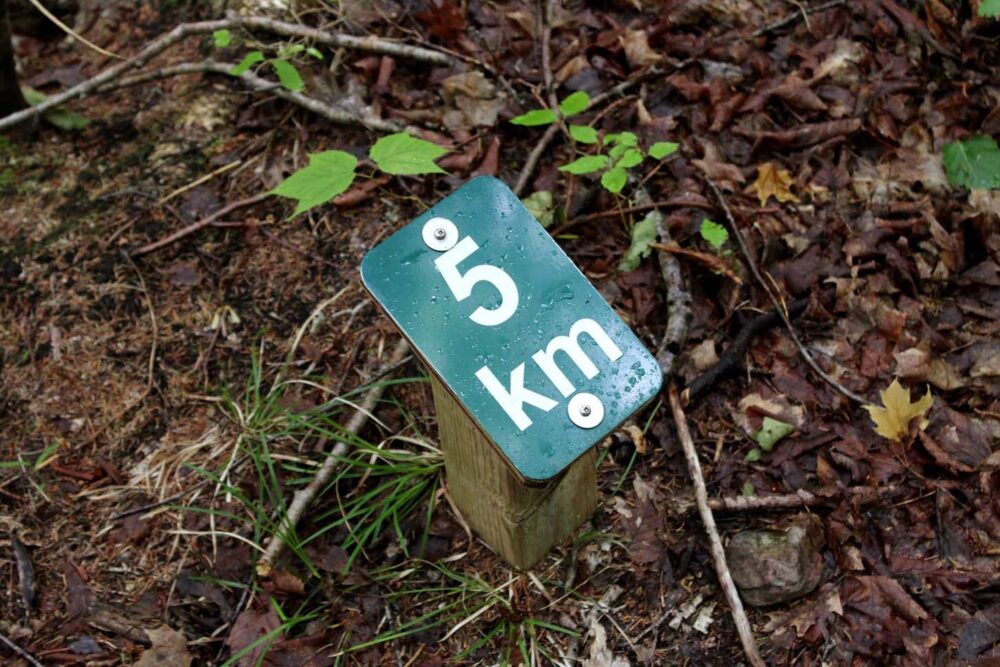 What to do near the Fishing Cove trail, Nova Scotia

Just a few kilometres south of the Fishing Cove hike is the Skyline Trail. One of Nova Scotia’s most famous hikes, the Skyline features epic views of the highlands and ocean from a jutting headland.

There is usually a loop trail open (8.2km) as well as a 6.5km out and back route. On our visit, the loop trail was closed. The Skyline trail is mostly flat and an easy walk for all ages.

At Pleasant Bay, you can go whale watching, check out the whale interpretive center or simply buy a well-deserved ice cream to eat on the beach.

If planning a trip like this, please take the 10 essentials of backcountry travel and follow Leave No Trace principles 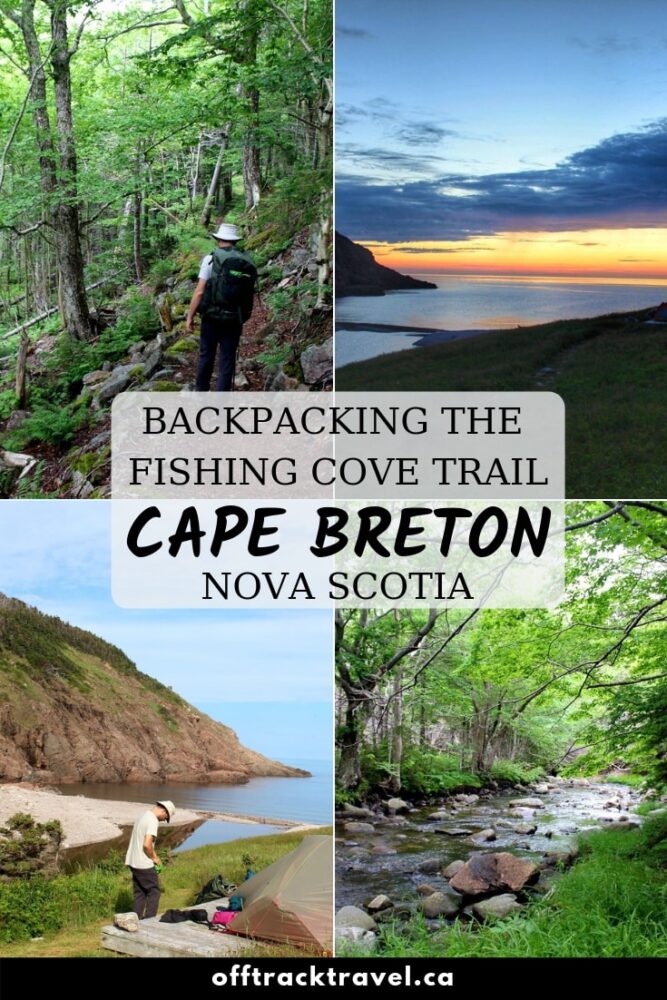 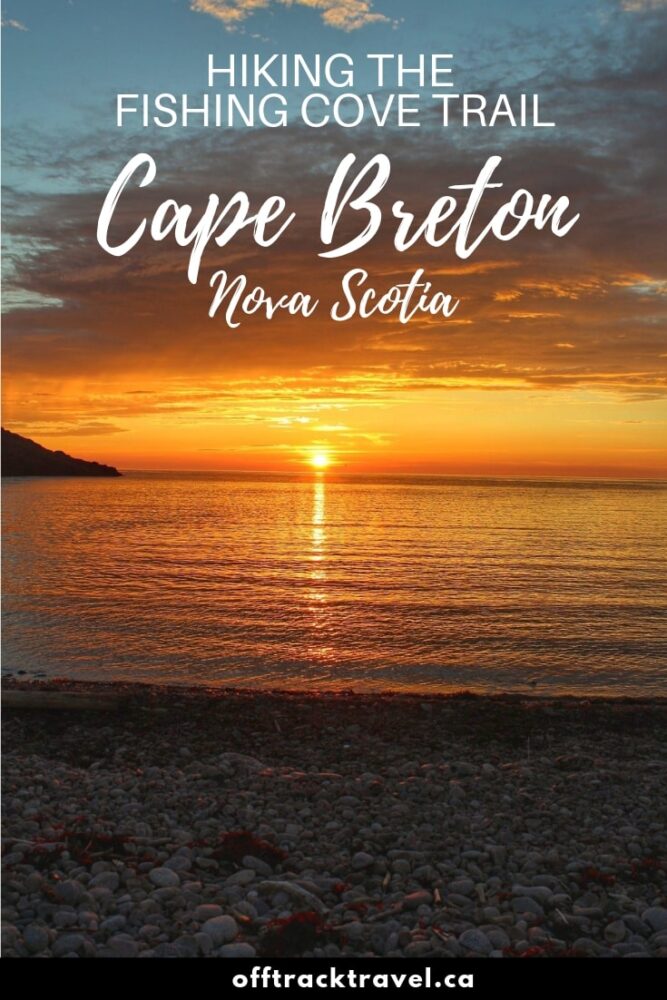 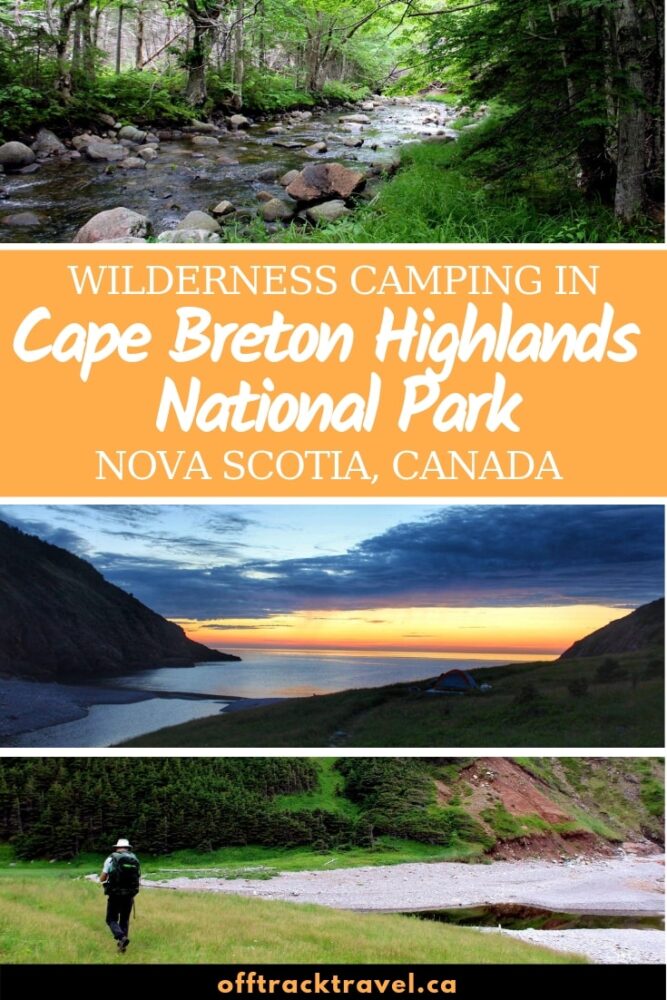 If you liked this post, PIN or save it for future reference with one of the below photos!