At first, we thought it was just very light rain hitting the fly of our tent. And then JR took a look out and reported “snow!” Yep, it was snowing in August. Well, at 2000m elevation anything can happen and indeed it did during our four day trip to Cathedral Provincial Park.

Often cited as one of the most underrated parks in the country, Cathedral offers a great British Columbia backcountry experience with little to no effort required.

To get to our 2060m base camp, we drove an hour and a half from home and then took 4×4 truck ride up the side of a mountain. Arriving at Quiniscoe Lake in about sixty minutes, we had just skipped a gruelling eight-hour hike.

I know, it doesn’t really sound like us – we often choose ‘the hard way’ just to save a few pennies. But these days we are more time poor; we wanted to get to the good stuff sooner.

And I can assure you that there is a lot of good stuff in Cathedral Park. So much so that this is only half our of Cathedral Park adventure. The second is all about the best one day hike we have done in BC, perhaps in all of Canada, the Rim Trail.

Read next: Hiking the Rim Trail, one of BC’s best one-day hikes

Cathedral has two campgrounds open in the core area of the park – Lake of the Woods and Quiniscoe. The latter is in the same area of the privately owned Cathedral Lakes Lodge. The main difference between the campsites is the ability to have campfires at Quiniscoe Lake.

Tempting, especially as I knew the temperatures would drop a fair amount at night. The decision for us, however, was easy since campfires were banned. So we were off to Lake of the Woods, the quieter and more spread out campground around 1km away from Quiniscoe Lake.

Setting up our tent on a site with a view of the lake, we said hello to our new neighbours (two deer and four fawns) and started relaxing. Yes, we came to Cathedral to hike but it was so nice and warm it would have been rude not to!

I’d heard that the fishing in Cathedral’s alpine lakes was pretty good so we had brought three fishing rods (including JR’s brand new fly fishing one) with us. JR ended up catching a little cutthroat trout on the first throw. It was to be the first of many…

As much as it would have been tempting to keep fishing and sunbathing for the rest of our time in Cathedral, we couldn’t waste the local hiking opportunities.

We did three hikes in all – one around the local lakes including Quiniscoe Lake, a longer trip on the Diamond Trail (in the rain) and the main event, the full day Rim Trail.

The Diamond Trail was our warm-up hike on our second day in the mountains. And boy, did we need a warm-up. Once the sun had set the night before, everything had turned a little chilly. Well, freezing really.

We dived into bed at 7pm and awoke to the aforementioned snow the next morning. Brrrr. Rain had been forecast but the freezing level wasn’t predicted to be so low.

We hid in the tent for the morning before venturing out for our little 8km hike. Needless to say, it was wet and we didn’t see much for the first hour or so. We almost turned around a few times.

But then we had a flash of blue sky and sun. Wow! There were mountains upon mountains peeking through the mist. It was worth being soaked through.

The only trouble with reaching the mountain ridge was being able to see the next rainstorm heading towards us. And at the higher elevation, it wasn’t raining this time. More snow, followed by hailstones. And the views closed up again.

But that’s OK. The Rim Trail was our priority. Though I have to admit we were more than a little concerned about the weather possibilities the next day.

It was another quiet (and early) evening at camp, with temperatures dropping even lower overnight. Lucky then that the bus ride up had enabled us to bring some luxuries. Such as wine. That definitely helped.

Cathedral is a 33,272 hectares Provincial Park near Keremeos, about three hours drive from Vancouver, BC.

There are three hiking routes in (around 8 hours) OR a $100 return truck/bus trip provided by Cathedral Lakes Lodge. Camping is provided by BC Parks and is $10 per adult per night.

If you liked this post, PIN or save it for later with the below image! 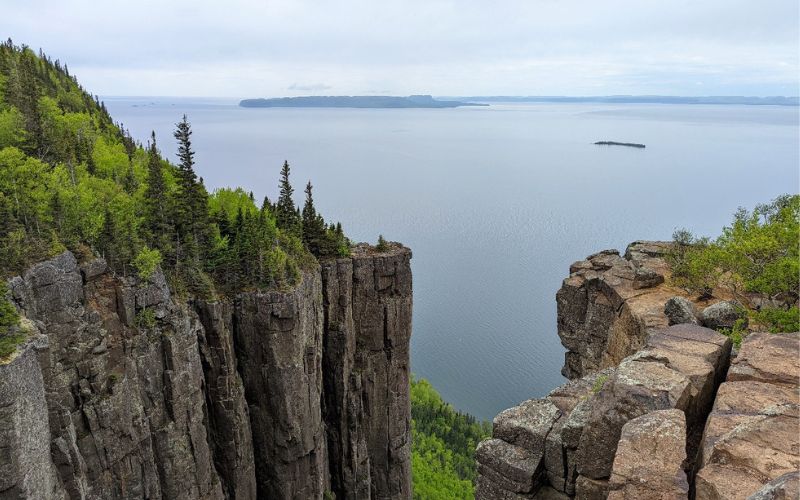 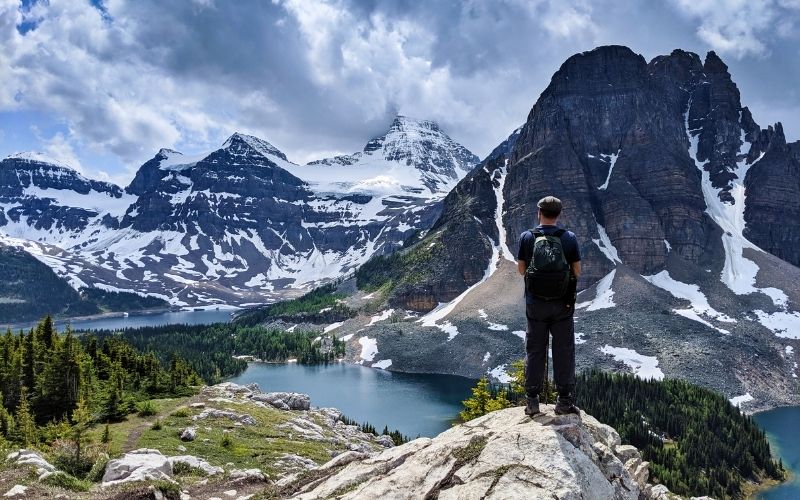 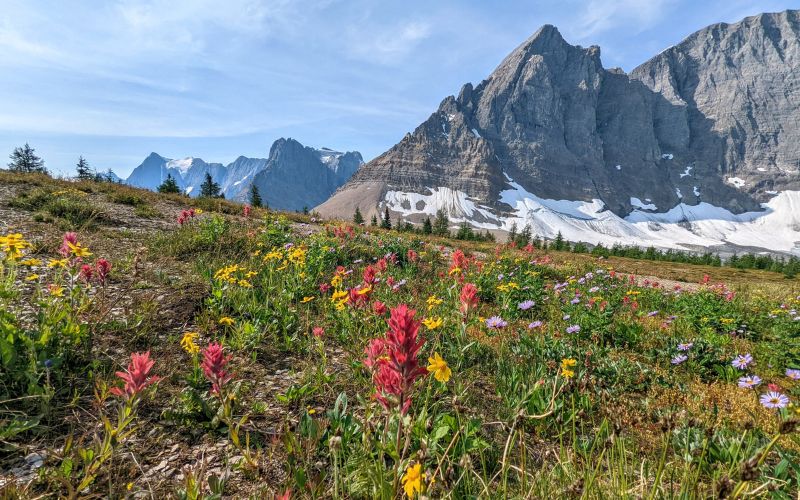 How big are the tent sites at Quiniscoe? Would a large tent fit?

We saw lots of families with larger tents at Quiniscoe.

Is it mandatory to have a 4x4 vehicle to get up to the base or is it suitable to hike the 13km?

You can hike it. I've done it. But it is a very long hike. The good stuff is up top where the lodge is. Only saw one other couple on the hike. Really felt like you were in nature :)

To my knowledge, the road to the base is owned by Cathedral Lakes Lodge. We took the shuttle up and the entry to the road is completely fenced off. Even if they gave permission to drive it, it is a very narrow (the width of one car) with only a couple of passing places so if someone was coming down while you went up, you'd have to reverse back down! The Cathedral Lakes Lodge staff use walkie talkies to communciate and avoid issues.

There is a trail leading to the base area which crosses the road a few times. I haven't done it (we had a discounted fare on the shuttle) but apparently it is not the most interesting hike!

Wow! I was looking information about Canada, especially Yukon and suddenly I founded your blog! It's amazing! I'm going to visit Canada when I finish my high-school and I dream about long-distance walk with my dog. For example from Edmonton to Dawson City. I really want to see autumn at North :) So please, write as many fantastic articles as you can - I'm from Poland and we haven't got too much information about hiking in Canada :/