High in the hills east of Kelowna is a walk/bike ride like no other. Beautiful Myra Canyon is home to 18 trestle bridges along the abandoned Kettle Valley Railway.

Ranging up to 220m in length, these wooden railway bridges are a sight to behold. The views from them are not half bad either, looking down towards Kelowna and Okanagan Lake.

Visiting Myra Canyon in autumn offers an even more special experience. The changing colours somehow manage to enhance the wonderful views of the surrounding landscape as well as the intricate trestles themselves.

Hiking the Myra Canyon trestles is definitely not an experience to miss while in the Kelowna area! Here’s more about the hiking experience and everything you need to know to visit the trestles yourself.

The Kettle Valley Railway (KVR) was a line built to serve mining interests in BC’s Southern Okanagan region from 1915-1989. It stretches from Midway to Hope, BC.

Since converted into an epic 500km+ long multi-use recreational trail, the maximum 2.2% grade of the KVR is perfect for leisurely bike rides and effortless strolls.

Myra Canyon, a long and wide chasm with several creeks running along it, proved to be difficult obstacle to cross for the railway planners.

The elevation is also the highest on the entire 455km long KVR route, at 1274m. 18 bridges (called trestles) and 2 tunnels were required to complete this tricky section of the KVR.

This incredible engineering achievement continues to be appreciated today by the thousands of walkers and cyclists who visit Myra Canyon every year.

Indeed, the Myra Canyon section is the most popular of the entire KVR route. Be sure to arrive early if visiting in the summer.

Read more: Walking the KVR Trail in Penticton, BC

Varying in height from 8 to 55m, the Myra Canyon trestles each have a different vantage point around the valley and across to the other trestles.

The longer trestles are my favourite as they have little viewing points jutting out into the canyon. These convenient viewing stands were actually used when the railway was active to store water containers in case of fire!

Sadly not all of the Myra Canyon Trestles are the original versions. 12 of the 18 trestles in Myra Canyon caught fire during the devastating 2003 Okanagan Mountain Park fire despite a multitude of efforts to save them.

Rebuilt by BC Parks and volunteers using government funding, most of the trestles were returned to their former glory by 2008. The Myra Canyon Restoration Society continues to raise money for the maintenance of these intricate structures.

2 of the 18 trestles are made from steel rather than wood. They’re still pretty picturesque though.

Myra Canyon is open to visit year round, but autumn is a particularly special season to walk or cycle the trestles. The pops of autumn colours on the hillsides around the trail seemed to fit perfectly with the rustic Myra Canyon trestles.

Myra Canyon is also one of the most easily accessible locations in the Okanagan Valley to see BC’s oldest and most beautiful trees – the alpine larch.

One of the only coniferous, deciduous trees, the alpine larch have cones like evergreens but drop their needles every autumn. Before doing so, the needles turn a gorgeous golden yellow colour for a short time.

The best time for viewing the larches is usually mid October, but it does vary depending on the year.

The Kettle Valley Rail Trail runs from Midway to Hope, British Columbia. For the most part, it is a well maintained, flat gravel trail suitable for people of all abilities.

The Myra Canyon trestles are located along a section of the KVR Trail close to the city of Kelowna. There are two main entrances, Myra Station (east) and Ruth Station (west).

Be careful to Leave No Trace when exploring nature – don’t feed wildlife, take home everything you brought with you and stick to the trails at all times! Stay away from edges of the trail and trestles to avoid the steep dropoffs

This 8km long logging road will take you all the way to the Myra Station parking lot. It is a reasonably well-maintained gravel road, doable with a 2WD.

If you’re planning to hike the Myra Canyon trestles, I’d recommend heading to Myra Station. There’s a better concentration of trestles close to the trailhead and I think the views are better too.

The first trestle (number 18) is 1km from the Myra Station parking lot. Another kilometre traverses five more. If you turn round at the 2km marker, the hike will take around one hour.

The most popular Myra Canyon hike is a 8km return trip (4km each way) from the Myra Station parking lot. This takes in 13 bridges (of 18) and 2 tunnels. For most people, this will take around two hours.

If you can, I’d recommend going a little further (10km return). The views from Trestle 7 are particularly excellent and are definitely worth the extra distance in my opinion! The trail also passes next to a larch forest in this section. We recently hiked this route and spent three hours total, with lots of photo stops.

Myra Canyon is very popular with cyclists, particularly young families. The 24km return trip between Myra Station and Ruth Station takes in all 18 trestles plus two tunnels. Most people take around 2-3 hours to complete the full 24km journey.

The route is almost completely flat the whole way but there is a slight downhill grade from Myra Station to Ruth Station. For this reason, some people like to start at Ruth Station for a more cruisey return journey.

If you don’t have a bike, there are bike rentals available right at Myra Station from May to October.

For a longer adventure, it’s possible to cycle all the way to Penticton (around 70km) and then get a shuttle back to Kelowna. Myra Canyon Bike Tours offers this in combination with a wine tour of the Naramata Bench.

Alternatively, you can also get a shuttle from Penticton to Myra Canyon and then cycle back at leisure.

When cycling the KVR, keep in mind that bikes must yield to hikers on trestle bridges

Looking to book a stay in Kelowna?

Hotel Zed – Colourful and quirky motel in the heart of downtown, only steps from the beach

Planning an Okanagan Valley trip? I think you’ll like these related posts:

Okanagan Valley Road Trip, BC: What to Do and Where to Stop

34 Awesome Things to Do in Vernon, British Columbia

74 Things To Do In Penticton and the Southern Okanagan, British Columbia 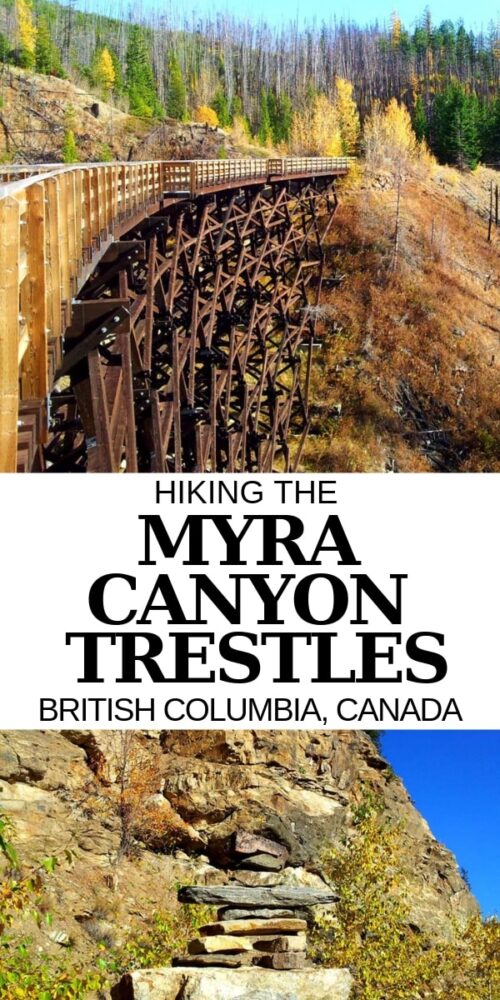