5 Reasons to Choose Canada for a Working Holiday

Working holidays are a great way to travel and live like a local while earning a wage. Depending on where you are from, you may be eligible to work numerous different countries for up to two years at a time. New Zealand, Canada and Australia are some of the most popular working holiday destinations. Here’s why Canada should be top of your list for a working holiday!

Unlike Australia, there is NO farm or rural work required to get the full 2 years. As long as you meet all the requirements on entry to Canada (including 2 years of travel insurance), you’ll leave immigration with a work permit that expires 1 year, 364 days into the future.

There is also NO limit on how long you can work for each employer. You can work as much or as little as you like, for the same employer during the whole 2 years or many different ones.

No doubt a relief for the squeamish, there is also no medical required for the IEC unless you plan to work with children or in the health services. To receive a second one-year working holiday visa in New Zealand, a medical MUST be performed.

The second biggest country in the world has a seemingly endless roster of places and experiences to enjoy. If you like the outdoors, you’ll truly be at home. With incredible landscapes and opportunities for adventure to be found from coast to coast to coast.

British Columbia’s lush rainforest and epic mountain peaks feel like a world (and 7000km) away from Atlantic Canada’s rugged coasts and tiny fishing villages. And in between are some of the world’s most vibrant, diverse and exciting cities such as Vancouver, Toronto and Calgary.

Looking north, the vast and wild Yukon territory is about the same size of the UK but has a population of only 30,000 people. If you’ve been looking for a slice of wilderness, this is it. From here, you can start the drive to the Arctic Circle and the Arctic Ocean beyond.

While Australia and New Zealand remain incredible destinations in their own right, Canada has an additional trump card. Just south of the border is the USA – home to arguably the best National Parks in the world and iconic cities such as San Francisco, New York and Chicago. A weekend in Seattle? Don’t mind if I do.

Read next: Driving the Dempster Highway to the Arctic Circle and Beyond

3. More adventure than you can imagine

As most people know, there is plenty of skiing and snowboarding opportunities in Canada, from the bright lights of Whistler (North America’s largest resort) to the smaller ski hills in the East.

According to the Global Liveability Ranking recently released,3 of the top 5 most liveable cities in the world are in Canada. Vancouver, Toronto and Calgary are ranked 3, 4 and 5 on the list (unchanged from 2015), based on 30 factors under 5 main categories – security, health care, education, infrastructure, culture/environment.

It’s official – a working holiday in Canada offers you the chance to live in some of the best cities in the world.

Perfectly positioned between mountains and ocean, Vancouver is a stunning city with easy access to the great outdoors. Vancouver offers the best of both worlds – busy metropolis with great sushi and shopping, outdoor adventure when you want it.

Toronto, Canada’s biggest metropolitan area, is like a mini New York City. Both the financial and commercial centre of the country, Toronto was recently declared the most diverse city in the world, with more than 140 languages and dialects spoken by residents.

Toronto may not be on the edge of mountains, but it still has plenty of parks and beaches to explore plus Niagara Falls is only a couple of hours away.

Read next: Vancouver vs. Toronto for your Working Holiday in Canada

Canada is a big country and has some impressively big animals living in it. Seeing a bear (safely!) for the first time in Canada is an epic experience. It’s a similar story with moose, bison, bald eagles, orca whales, lynx and the many other amazing animals that call Canada home.

While there are still a handful of venomous/dangerous animals in Canada, you’ll probably be happy to hear that there are no giant huntsman spiders lurking in bedroom corners or crocodiles in swimming holes. Lethal jellyfish are rare (and actually non-existent on the BC coast) so you can swim year round if desired.

Convinced? Check out my eBook “The Ultimate Guide to a Working Holiday in Canada” for all the info you could ever need! 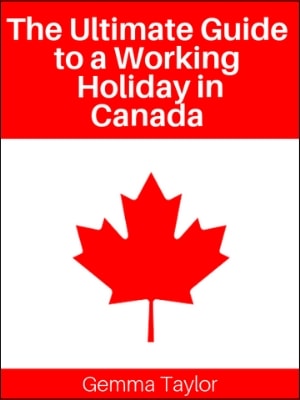 PIN or save this post for future reference with one of the below photos!

Check out these other posts about working holidays in Canada