Simply put, the Dempster Highway is one of the best road trips in the world. It’s a one way trip to the Arctic, through the middle of tundra, jagged mountains and limitless wilderness. The wilderness here is rich, barren, lush and desolate all at the same time. This is the Arctic that you never imagined.

The Dempster is Canada’s only highway crossing the Arctic Circle. The 735km-long Dempster Highway was built in 1979 and roughly follows the traditional First Nation transportation route between the Yukon and Peel river systems.

We spent an incredible three weeks on and around the Dempster Highway – read on for tales from the road plus a practical guide to completing this epic trip yourself.

Freedom of the road: the Dempster Highway

Driving the Dempster Highway is a one-of-a-kind experience. The start of the highway is about an hour from Dawson City, itself an interesting gold rush outpost. From here, the road travels through Tombstone Territorial Park and then there is nothing for the next 300km.

Well, nothing in terms of human life aside from a random RV or car maybe every couple of hours. There is however so much else; the unexpectedly vibrant flowers, stunted trees, a huge variety of animals from grizzlies and porcupines to black foxes and moose.

The Dempster Highway has a reputation for being rough and a real-tire eater, but we were actually pleasantly surprised (even with it claiming one of our own all-terrain tires).

Under the Midnight Sun of the north

About an hour before we reached the Arctic Circle, our GPS started to go a little crazy. Apparently sunrise would now be at 6 pm and sunset at 10 am.

Arriving at the official line of latitude (405km in) a little while later, it just gave up. We would later toast our drinks at midnight to celebrate my 25th birthday, also the summer solstice. For the next 50 or so days there would be 24 hours of daylight.

24 hours of daylight was exciting, novel and amazing all at once but it was hard to sleep. The town of Inuvik is found at the ‘old’ end of the Dempster Highway (the all-season road was extended to the town of Tuktoyaktuk in 2018), and while we enjoyed our time there, it was also 33 degrees Celsius for the entirety of our stay, 24 hours a day. It was a bit intense.

For other purposes, 24-hour daylight is awesome. We fished, drove and hiked late at ‘night,’ getting back on the road at whatever time we pleased. The fishing on the Dempster, by the way, is productive. For once, we actually caught plenty of fish

A journey of discovery on the Dempster Highway

One of the most unexpected parts of the trip was how much we learned about local First Nation culture. The Dempster highway travels through the traditional home of the Han, Gwich’in and Inuvialuit people.

These lands have fed and sheltered generations of First Nation people. Hunting, fishing and trapping still remain an integral part of the life of many people living in the area.

We met such generous and kind folks over the two weeks we travelled the Dempster and gained a much better appreciation and respect for the area and its people.

Learning how to make Labrador tea, bannock and jam, JR also made sure to eat plenty of the traditionally smoked whitefish.

Another surprising part of the trip was finding fossilised coral next to Engineer Creek!

Read next: A Love-Hate Relationship with Canada’s Midnight Sun

Being so far north not only offered us the experience of 24-hour daylight but also that of hoards of mosquitoes and black flies trying to drink our blood. And by hoards, I mean millions and millions of them.

Being outside of our vehicle was a huge challenge at times. Even being inside the vehicle could be difficult – we do love our Astro Van, but a huge number of mosquitoes found their way in through the old vents and tormented us in our sleep, despite using a net. I still have flashbacks of the buzzing.

Needless to say, bringing bug repellent is a necessity. I also wouldn’t recommend camping in valleys – the Rock River campground (445km) was something of a breeding ground. The windy days were by far our favourite days on the Dempster.

Read next: Polar bears, endless daylight and a igloo church in Inuvik, NWT

Must see stops when driving the Dempster Highway

For such an isolated and supposedly desolate road, there is a surprising amount to see and experience on the Dempster Highway. Here are our highlights:

Looking to book a stay in Inuvik?

The truth of it is that the best time of year to drive on the Dempster Highway depends on what you want to see.

Our trip was focused around the summer solstice because 1) it was my birthday on 21st June (longest birthday EVER!) and 2) it fitted well in with the rest of our summer plans.

Travelling on the Dempster in mid-June, however, meant that the blackflies and mosquitoes were in full force, which is less of a problem later on in the season.

The early season timeframe also limited the hiking opportunities in Tombstone Territorial Park – the Grizzly Lake trail, for example, did not open until early July that year.

Another popular reason to visit later in the summer is the fiery fall colours that start appearing around August.

Read next: 34 Interesting Things to Do in Dawson City, Yukon Territory

The Dempster Highway is a long road and rough in certain areas. While it is reasonably well maintained, your vehicle should be in decent enough shape to drive a couple thousand kilometres in the dirt.

Take your time and drive safe. Get on Dempster-time and just enjoy one of the best road trips in the world! Up to date road conditions can be found on 511Yukon.

There are lots of great wild camping spots along the Dempster Highway, alongside a handful of maintained rustic campgrounds (pit toilets, picnic benches etc.)

The rustic campgrounds on the Dempster Highway have the bonus of covered shelters with screens on the windows, which are very useful for avoiding rain and bugs. The disadvantage is that these campgrounds are all located next to water sources with very little wind. Consequently, they can be very buggy.

If you need to get clean, there are showers at the halfway point at Eagle Plains. We did not stay at this Dempster Highway campground (next to the hotel) but asked if we could use the showers and were told to just go ahead.

Here are a few must-have items for any summer Dempster Highway road trip, tried and tested by us!

Read next: Four Yukon Road Trip Essentials You Must Carry 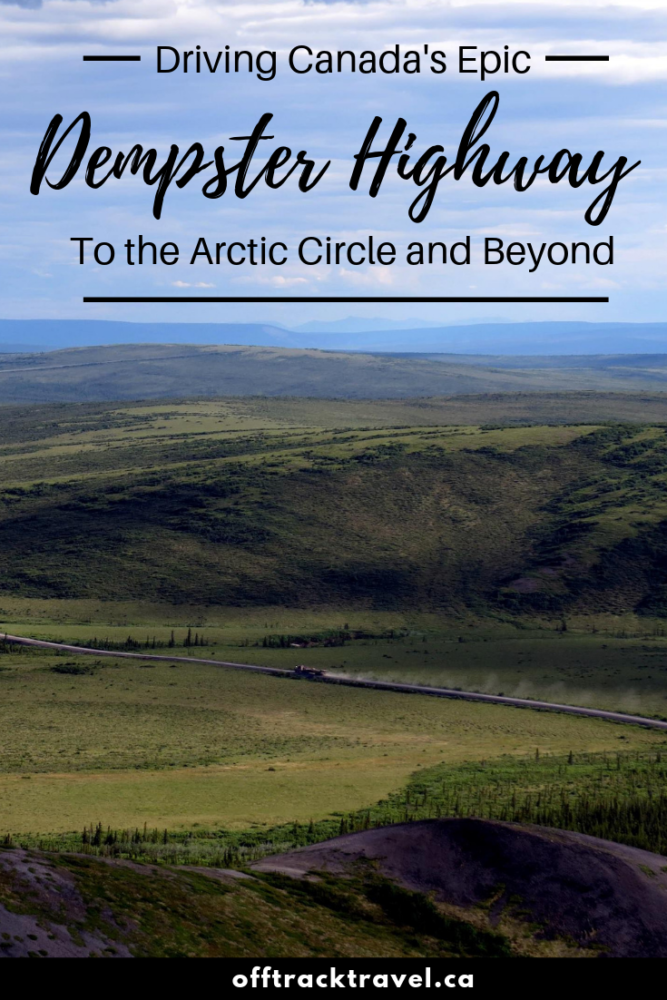 68 thoughts on “Driving the Dempster Highway to the Arctic Circle, Canada”