Off Track Travel: Quarterly Catch Up, October to December 2018

Welcome to the next update in our life of travel! I hope you’ve had a fabulous festive season and will have a wonderful 2019.

This quarter started with a whirlwind of a 4000km road trip across the North American continent and ended with Christmas in Perth, Australia.

I bet you didn’t expect that! Don’t worry, Canada is still our home base – we’ll be back in British Columbia in May.

What have we been up to?

This quarter has been quite a transitional one. The start of October found us in Ontario, preparing to drive back across the USA to British Columbia.

Without a definite plan for the winter, we were unsure what our time in BC would bring.  Here’s a taste of everything that has happened since then.

Road tripping across the USA

I wish I could say that our road trip across the USA was an experience of a lifetime, but it simply wasn’t. We were tired and exhausted from the last six months of travel.

Don’t get me wrong, we did some amazing things* but so many days involved eight or nine hours of solid driving to get from Point A to Point B. The roads were big and busy, camping spots hard to find and the weather a little belligerent.

Everything did get better, however, as soon as we reached the western side of South Dakota. The traffic lessened, the landscape became more interesting and there were free campsites everywhere. And finally, there were mountains. We felt at home.

*Amazing things included going to Cedar Point in Ohio (one of the best theme parks in the world), catching up with a friend in Milwaukee (a surprisingly nice city!), touring the cheese makers of Wisconsin (SO GOOD), admiring the beauty of Badlands National Park (snow! and bison!), checking out Mount Rushmore (the surrounding rocks are more fascinating) and exploring the Black Hills of South Dakota (just too beautiful).

Putting a hold on vanlife

Mid way through our USA road trip (probably when the temperature dropped to -10c overnight), we decided that we would definitely be going somewhere warm for the winter.

It was never the plan to live in the van full time. JR and I both know our limits with continuous travel and it is around the four/five month mark. Besides, the van simply isn’t kitted out for full on long term winter travel.

The van will be in storage back in British Columbia for the winter, awaiting our return in spring. I’m so excited for our adventures already. From prior experience, we know that BC is the most ideal place to travel in a van.

Read Next: 5 Underrated Parks in Quebec That Deserve More Attention

A short break at home

Returning to British Columbia after a year on Canada’s East Coast was a bit like receiving a big, warm hug. The familiarity of the mountains and valleys were so soothing, I immediately felt at peace.

The November weather was pretty good too – we kayaked, climbed outside and even sunbathed a couple of days. BC, you never let me down!

It was fantastic to catch up with friends both in the Okanagan Valley and Vancouver Island. Nothing like being away for a while to make you appreciate what you once took for granted.

I don’t know about you, but I love booking flights at fairly short notice. There’s something a bit magical about clicking that ‘purchase flights’ button and flying out merely a few weeks later to somewhere new.

There was a slight downside of our fairly last minute flights to Australia – the length of the journey.

It took us around 40 hours to travel from Vancouver to Perth, via San Francisco and Singapore. The longest flight was almost 18 hours in length, one of the longest flights in the world. Why Perth? Well, for one, my brother lives here and he needed a dogsitter for an extended period.

Anyway, here we now are, celebrating Christmas and New Year in the southern hemisphere for the first time in years. I love the heat, the sunshine and the relaxed Aussie way of life.

I did forget, however, how strange stereotypical Christmas advertising seems when you’re down under. So much snow!

We will be in the suburbs of Perth until late January. Being that January is the hottest month here, so I’m looking forward to plenty of beach days!

Our next destination is in Thailand, where will we stay for three months. Neither JR and I have ever been to Thailand but it has been near the top of our bucket list for years.

I doubt we’ll do much beyond the beaten path travel in Thailand but I am SO excited to try all of the tasty street food, check out the beautiful beaches and experience a country a little more out of our comfort zone.

We will be primarily based in Chiang Mai, Bangkok and Koh Samui. If you have any tips and or advice for any of these places (and travelling in Thailand in general), please leave a comment below!

What I’ve Been Writing About

Things have been a little quieter on the publishing side the last few months, mainly because I’ve been concentrating on updating old posts (again) and revamping bits and pieces of the website.

It is an interesting fact of my life as a travel blogger that I don’t actually spend as much time as you would probably expect actually writing.

A surprising amount of my time is occupied by various forms of social media, administration, search engine optimisation (SEO) and website maintenance.

I love being able to run a business like this but it’s sad that blog writing often gets pushed down my ‘to do’ pile. Having said that, here are some new posts you may have missed:

Extraordinary Canoe and Kayak Trips You Must Try in Canada

Things We’ve Been Loving This Quarter

An extended autumn: While I always dislike the end of summer, the one upside is the autumn colours coming in. I just can’t get enough of them. One big bonus of leaving Ontario in early October and heading west was the prolongation of autumn. The leaf peeper in me was very pleased.

Returning home: As much as we enjoyed exploring the eastern side of Canada this year, there is nowhere quite like British Columbia! We are excited to be based on the west coast again for the foreseeable future.

I know, I know, if we like BC so much why would we not stay for the winter? The truth is, after seven years of Canadian winters, we felt it was time to do something different.

Summer again: As noted above, I am very much a summer person. I didn’t realise quite how much until we arrived in Perth and I just felt my soul lift. Just like magic, it is the start of summer again!

The flowers are blooming, the trees are green, the sky is that beautiful deep blue and there’s just so much positivity in the air. I haven’t had three summers in a row since 2007/8 and I am so excited about it.

After some thought, I’ve decided to move these quarterly updates to email format, with monthly updates rather than quarterly ones.

If you’d like to subscribe to our brand new monthly newsletter all about beyond the beaten path travel and outdoor adventure (plus an overview of what we’ve been up to), you can do so using the sign-up form below. The first update will go out in early January. You can unsubscribe at any time.

Alternatively (or additionally!), you can also subscribe to receive an email update every time we publish a new post to the site via this link.

As always, thank you so much for your ongoing interest and support! It means so much to us. 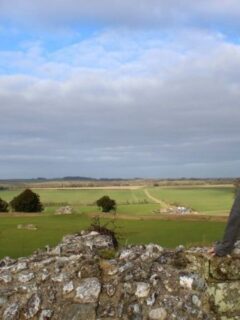 Next
OffTrackTravel's Best Adventures in 2018
Click here to cancel reply.