The biggest update to our GMC Savana DIY van conversion journey yet!

In just over two weeks, our van really became liveable with a proper ceiling, cupboards, under bed storage, seating, solar panel system and more. JR managed to get an incredible amount done in such a short period of time.

But in classic van building style, the conversion wasn’t quite done. A few finishing pieces here and there were missing, although nothing truly essential. We have also learned from experience that it is best to have something of a trial to test what works and what doesn’t.

So after this stage, we travelled in the ‘almost finished’ van for two months, exploring Canada’s Nova Scotia and Prince Edward Island provinces. I’ll talk more about the results of this trial next time! For now, here’s a look at the big changes.

The van’s ceiling is something we are especially proud of. Not only does it look great and have a personal connection to us (the spruce wood was grown on JR’s dad’s land) but it has practical functionality too.

It may be hard to tell on first glance, but the ceiling has two levels of wooden slats, with the narrower (and thinner) part simply resting on top of the wider slats.

This means that even if the wider slats expand or contract with cold/hot temperatures, we won’t end up with a ceiling full of gaps. Constructing this ceiling was difficult. It took hours and hours of sanding and varnishing plus half a day to put together (with a two-man team, thanks JR’s dad).

One of the most important considerations when designing this van was the under bed storage. We have a lot of hobbies and having enough space for all of the required equipment for these hobbies is important. This was one of the major reasons we upgraded to a Savana from our old Astro van conversion.

We came to the conclusion that everything we use regularly (clothing, personal items) should be accessible from inside the van, and the remainder (mostly outdoor gear) from the back. The logic was right, but it proved a little tricky to implement.

The biggest issue was our two snowboards and bulky winter gear. The original plan was to build two drawers at the back for all of our outdoor equipment but there was no way that would work with the snowboards.

Instead, JR built one large drawer on a slider (rated to 100lb) and left the space alongside as a long, open storage place for awkwardly sized outdoor equipment.

Over on the other side of the bed is another large drawer (again with a 100lb rated slider) that contains clothing and personal items. The remaining under bed storage is only accessible via lifting the hinged bed panels.

This storage is only used for items we rarely use or need to access. One of these items is the solar system battery (more on this later). The handles on both of these large drawers are handmade by JR and match the cupboards.

Next up, the cupboards. The idea here was to have a full height cupboard with a cut out for a small ACDC fridge. One of JR’s priorities was a drawer to safely fit his banjo and ukelele. The result (a deep, drawer lined with fake fur) is probably one of the most unique van features I have personally seen!

The largest storage space is for clothes and personal items. At the time we left, there were no dividers within this space. Lower down, the bottom cupboard is dedicated to food, separated with three shelves. The large gap above the fridge is necessary for ventilation.

Another new storage area is our ‘kitchen.’ This cabinet has a sliding drawer containing almost all of our cooking equipment. Behind the drawer is a storage space for our two burner Jetboil Genesis (plus integrated pot system) and 5lb propane tank.

The work surface can be used from both inside and outside the van, great for those bad weather days. The section closest to the bed doubles up as a seat, with custom-made cushions (thanks Clare) that are easy to remove and store.

Opposite this is another seat, with storage underneath. A later project will be to add a removable table.

One of the last projects was the solar system. This was something we both worked on. All the parts had been purchased long before (2 x 75W panels, controller, fuses and deep cycle marine battery) but it proved to be a bit of head scratcher to put together.

At least, in theory. We read so many overly complicated guides on how to do it, became overwhelmed and then finally bit the bullet. And, somehow, it was a lot easier than expected. Isn’t it nice when that happens?!

Unfortunately, we ran out of time to actually affix the panels anywhere on the outside of the van, so for the time being, they stayed stored in the back.

We planned to take them out whenever possible. Obviously, this wasn’t ideal. The most obvious location to affix them to would be the roof of the van, but we already have a canoe and two kayaks stored there.

Key lessons learned from this stage of the conversion:

Catch up on other stages of the conversion:

Save or PIN this post for future reference with one of the below images! 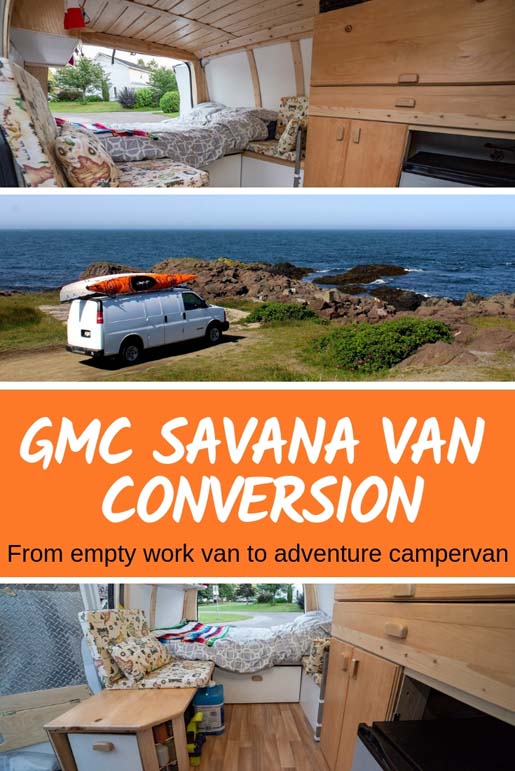