Diamonds. Twelve varieties of ‘ALASKA’ t-shirts. Crowds of people. And even more oddly, Santa. I had just arrived in the tiny town of Skagway, Alaska and I was confused already. Before arriving in Skagway that August day, all I knew of Skagway was that it was the starting point of the famed Chilkoot Trail.

I thought Skagway would be like Dawson City; a cute, historic ex-Gold Rush town with a whole lot of wilderness spirit. Plus mountains. Well, Skagway is a bit like Dawson. The town just happens to be a cruise ship port as well. Read on for my experience in this beautiful yet baffling Alaskan town.

Skagway, Alaska: A town of contrasts

On a high from crossing the US border for free (the payment machine was out-of-order), I was welcomed into Skagway by the sight of three gigantic cruise ships. I could spot mountains and a glacier or two behind these huge white monoliths. It was a strange contrast.

Thinking I’d take a little wander before heading to find a campsite for the night, I walked down Skagway’s main street in shock. Every single one of the restored shops seemed to be selling every kind of Alaska branded made-in-China merchandise imaginable plus half a dozen diamond sellers and a Christmas store.

And then I started to notice anyone around me. These were not people who were sleeping in their van and cooking on campfires. I suddenly felt quite out-of-place and made a hasty retreat. Luckily, I did not have to go too far to find an escape. 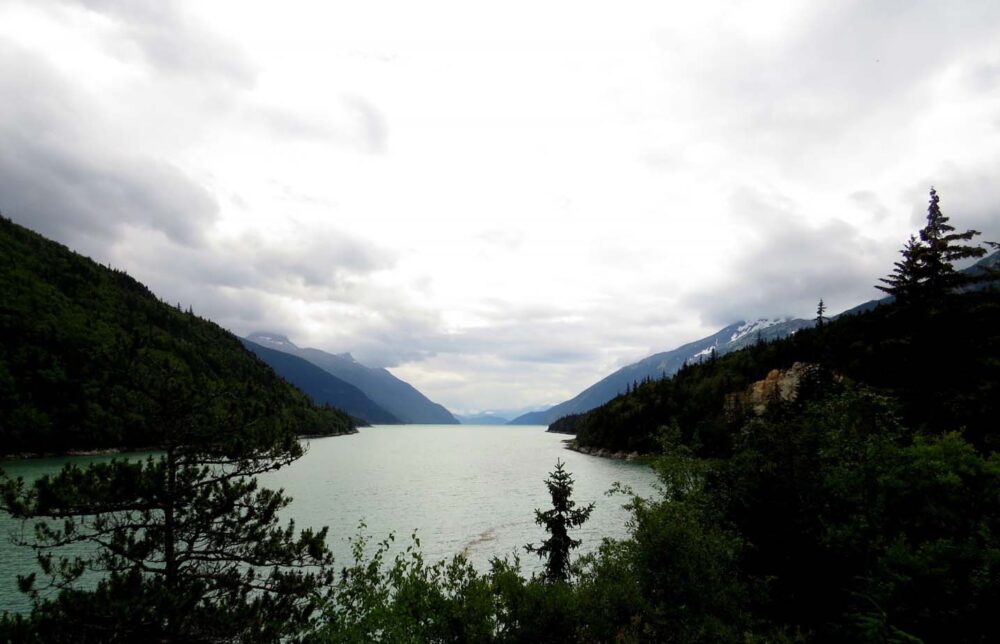 Dyea (pronounced die-ee) is a largely abandoned town a few kilometres away from Skagway. It was a boomtown in the Gold Rush days with the start of the 53km Chilkoot Trail located just behind it.

The Chilkoot Trail was the route thousands of gold-seekers used to travel up and over the mountains in the late 1890’s on their journey to reach Dawson City, the epicenter of the Klondike Gold Rush (1896-88).

Today, Dyea is National Historic Park land, accessed by a narrow road alongside the Taiya inlet. There’s a nice enough campground with sites available for $10/night. I stayed here, along with a handful of hikers heading out on the Trail the next day.

I took a trip out to see the trailhead myself, wishing I was heading out on a Chilkoot Trail hike. Checking out what was left of Dyea (a wonderful walk in the woods with interpretive panels), I then headed back to town to buy a ferry ticket to get out of Dodge.

The gold miners heading out on the Chilkoot Trail arrived by ship, usually from San Francisco or Seattle. The majority of visitors to Skagway still arrive by water, though the actual form of transportation is certainly different these days.

Read next: 34 Interesting Things to Do in Dawson City, Yukon Territory

I admit it, I did go in a souvenir shop – one that had an ATM with cheaper transaction costs than the Wells Fargo bank a few doors down. With American dollars in hand and a ferry ticket purchased, I went on a walking tour of the town after procuring a guidebook at the strangely quiet Visitor Information building.

Choosing one of the sights away from the main street at random, I ended up at the Moore Homestead, a National Historic Site.

William Moore was a clever and industrious guy. A bit of an expeditionary, he concluded that gold was likely to be found in the Klondike area since it had also been discovered in similar mountain ranges elsewhere.

Moore settled in what is now modern Skagway, believing that this area would provide the most direct route to the goldfields and would be a strategic place to set up business. He was right.

Moore’s homestead sits just a few steps (around eight to be precise) away from the main street and it felt like it was in a different world. The Ranger inside was happy to see me and offered a little tour of the exhibits inside the museum. He said that they didn’t really receive many visitors.

Read next: Driving the Dempster Highway to the Arctic Circle, Yukon Territory 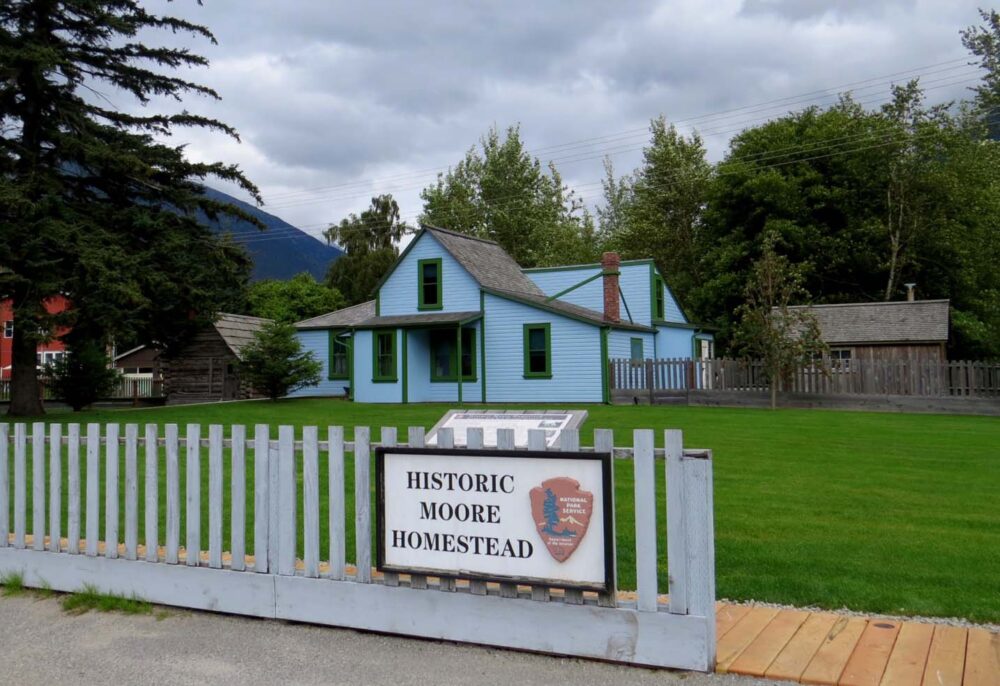 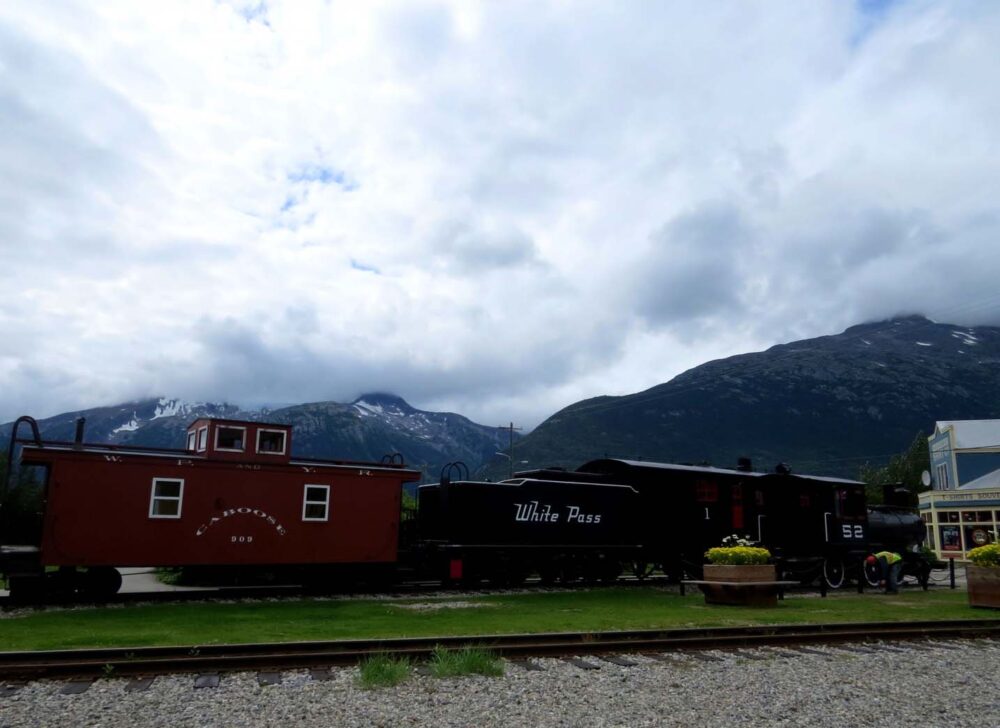 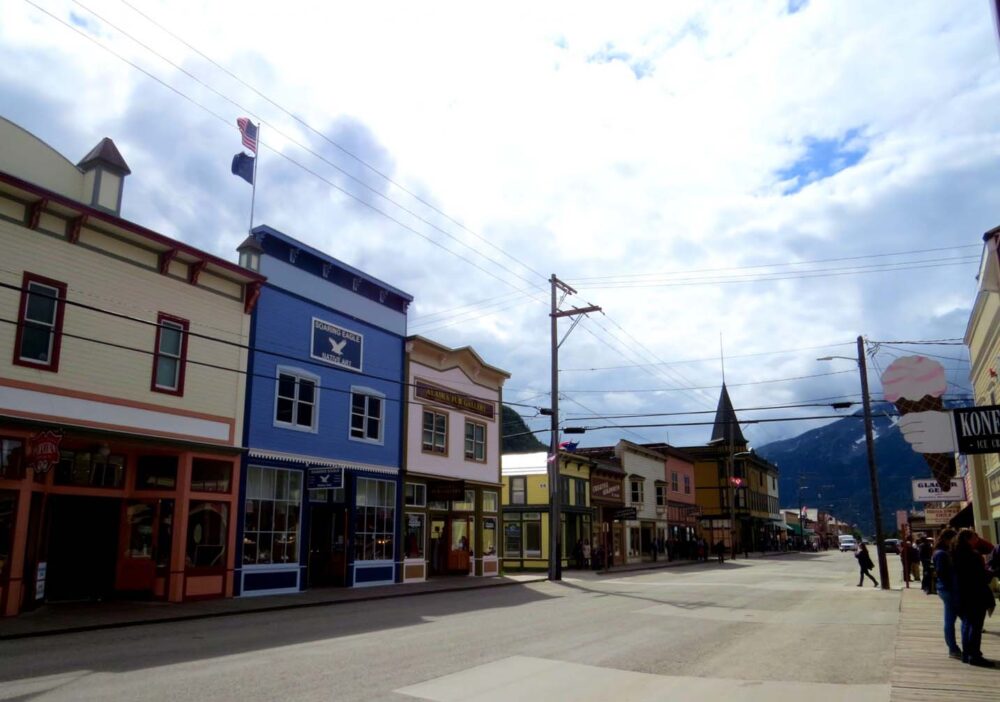 A return to Skagway, Alaska?

On paper, Skagway sounds great. I wanted to like it and I do in a way. I want to hike the Chilkoot Trail and then take the White Pass train back (built 1900, just as Gold Rush fever was dying down) and follow it all up with drinks in the Red Onion Saloon and a walk to see one of the beautiful waterfalls near town.

The scenery around Skagway is incredible and I so wanted to enjoy it. But it was hard to get my head around all those cruise ships. Maybe I should just visit in winter. Regardless, I will be back, even though I didn’t enjoy it the first time.

Things to do in Skagway, Alaska

For such a small town, Skagway does have a lot of activities and attractions to offer, undoubtedly at least partly due to the cruise ship visitors. Here are some ideas for things to do in Skagway, Alaska. Of all these suggestions, I’d highly recommend taking the short drive out to Dyea if you can!

Looking to book a stay in Skagway, Alaska?

Have you ever been anywhere you didn’t like initially but could see the appeal? Let me know in the comments! 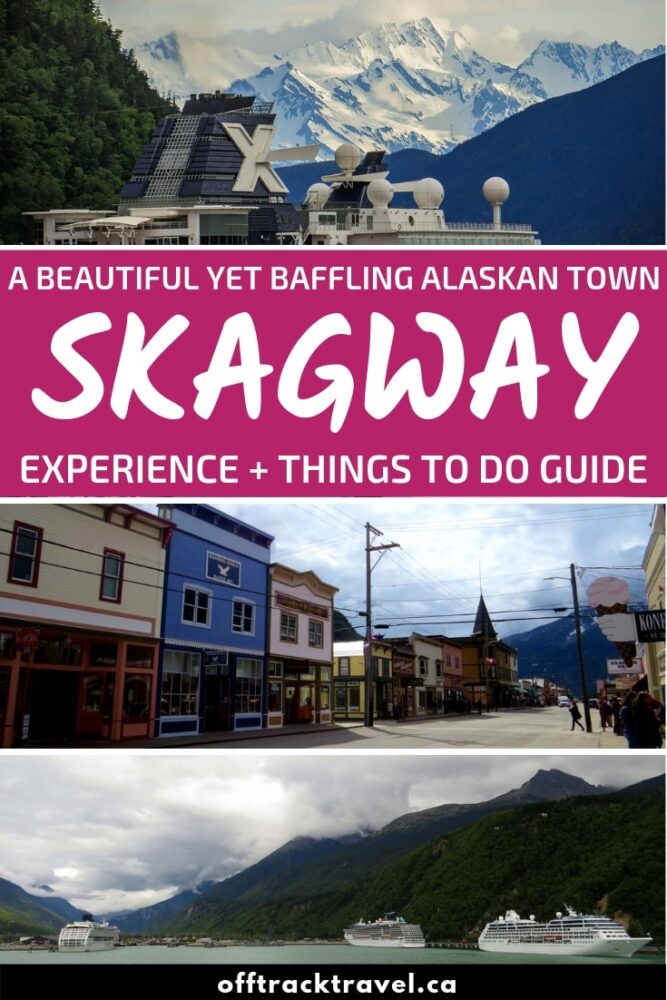 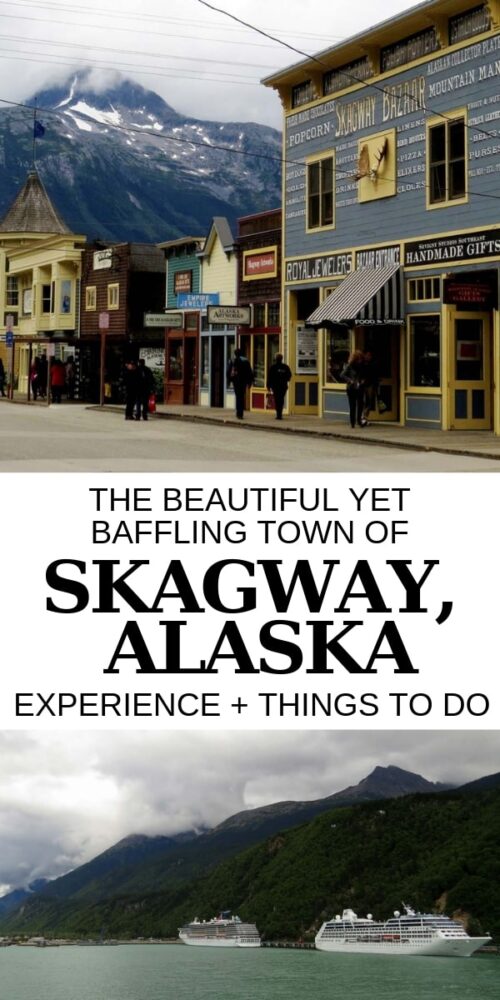 15 thoughts on “A Love-Hate Relationship with Skagway, Alaska”