Canada’s smallest and least populated province has an incredible amount of shoreline – 1100km to be exact, with 800km of beaches. And PEI’s beaches are something a little extra special, with the sand ranging from tropical island white to a vibrant rosy red in colour.

For this reason, it is no surprise that Prince Edward Island is well known for idyllic beach holidays. Last summer, we took on the challenge to find the best beaches in PEI, driving over 2000km to see as much of the island as we could.

And what a success it was! Prince Edward Island has an incredible range of spectacular beaches from coast to coast to coast. The highlight for us was definitely the eastern shore, a less visited region with SO many gorgeous golden stretches of sand. At one point, we had to force ourselves to move on and see the rest of PEI!

Don’t worry, I won’t make you wait any longer for the results of our road trip – here are 12 of the best beaches in PEI, Canada.

The ‘singing sands’ of Basin Head have made this beach famous across Canada and beyond. When the sand is dry, it will squeak as you walk through it. It’s a result of a perfect blend of sand grain size, silica content and humidity.

The singing sands aren’t, however, the only reason that Basin Head is on this list of best beaches in PEI. Basin Head is actually two beaches, split by a channel towards the southern end. The channel (or ‘run’ to the locals) is crossed by a bridge and is popular for people of all ages to dive into.

The white sands of the main beach seem endless, though most people do stay close to the parking area and Fisheries Museum.

How to find this beach: Basin Head Provincial Park is in the northeastern corner of Prince Edward Island and is well signed from Highway 16. Souris is a fifteen minute (13km) drive to the south.

A more secluded and peaceful version of the other north shore beaches (Brackley and Cavendish, see below), Greenwich is a bit of a hidden gem. The beach is accessible via a short boardwalk, starting at the eco-friendly washroom buildings. Once you get there, it feels like the white sand just goes on forever.

Greenwich Beach is part of PEI National Park and has the largest sand dune system on the island. Numerous rare plant species are found here and the surrounding wetland areas. Besides the supervised beach, there is an interesting interpretive centre and three day hiking trails.

How to find this beach: Greenwich Beach is a short drive west of Saint Peters Bay, on the north shore of Prince Edward Island. The park is just under an hour’s drive away from Charlottetown (60km). Please note – Greenwich Beach has a daily admission fee.

Planning a stay near Greenwich Beach? The Inn at St. Peter’s is only a five minute drive away.

Part of Prince Edward Island National Park, Brackley Beach is the closest stretch of sand to Charlottetown. It only takes 25 minutes to drive from downtown to the Brackley Beach parking lot on PEI’s northern coast. And what a winner of a beach this is, especially for families.

Brackley Beach is a particularly large and long PEI beach, so despite the popularity and close proximity to Charlottetown, there is still a lot of space for everyone. Just walk a little further to find your spot. A short (wheelchair accessible) boardwalk leads to the beach via the spacious changeroom, shower and washroom buildings.

How to find this beach: Getting to Brackley Beach is easy – simply follow Highway 15 from Charlottetown to the northern coast. There is a large Parks Canada parking lot close to the beach. Please note – Brackley Beach has a daily admission fee.

Planning a stay near Brackley Beach? Jake & Jo’s Cottages are less than 2km from the sand!

Prince Edward Island’s flagship beach is Cavendish, conveniently situated not far from Charlottetown on the north coast. Visiting Cavendish Beach is one of the most popular things to do on Prince Edward Island but the seemingly endless miles of sand help to break up the crowds.

Bordered on one side by red sandstone cliffs, the tan coloured shores of Cavendish Beach stretch for miles in the other direction. Boardwalks and trails lead visitors safely over and around the gorgeous sand dunes that line the beach.

Families are well catered for with changerooms, washrooms, supervised swimming and water that never seems to be too deep.

How to find this beach: Cavendish Beach is an easy forty minute drive from both the Confederation Bridge and Charlottetown. The main parking lots are found on Graham’s Lane, behind the township of Cavendish. Please note – Cavendish Beach has a daily admission fee.

The first European visitor to PEI, Jacques Cartier, came ashore in this area in 1534. He proclaimed the vicinity to be “the fairest land ’tis possible to see!” and he had a good point. Jacques Cartier Beach offers a strip of soft red sand, backed by grass and a quiet road.

There’s a provincial park campground here, with easy access to the water, a supervised section of the beach and a statue of Jacques Cartier. We parked a little further up the road. Jacques Cartier was our favourite beach in Western PEI.

How to find this beach: Jacques Cartier beach is located just off Highway 12, less than fifteen minutes south of Tignish. It is about 100km northwest from the Confederation Bridge.

Read next: 13 of the Best Beaches in Nova Scotia, Canada

A definite highlight of driving PEI’s western shore is the light terracota sands of Cedar Dunes. Backdropped by dunes and a boardwalk, this quiet provincial park lies far beyond the beaten path. Next to the beach is a small campground; some spots even have ocean views.

Cedar Dunes is also the home of the distinctively white and black striped West Point Lighthouse. As well as being PEI’s only working lighthouse, the historic structure now contains a museum and 13 room inn.

How to find this beach: Cedar Dunes is found on the western shore of Prince Edward Island, just off coastal Highway 14. It takes about an hour to reach Cedar Dunes from Summerside by road, and forty five minutes from Tignish in the north.

A fairly narrow red sand beach, Argyle Shore may not be big but it is a solid choice for a coastal stop along Prince Edward Island’s southern shore.

Bordered by rugged red cliffs (and sometimes a waterfall or two), another distinctive feature of this beach is the muddy red appearance of the seawater. On close examination though, you’ll find that the water is completely clear.

Argyle Beach tends to be fairly quiet, despite being just a short detour off the highway. There is a well maintained washroom building with showers and change rooms. A staircase leads down from the cliffs to the beach.

How to find this beach: Part of a Provincial Park of the same name, Argyle Shore is found south of Highway 19. It is about half way between the Confederation Bridge and Charlottetown, so convenient for many visitors to PEI.

Looking for somewhere to stay near Argyle Beach? The cottages at Blue Spruces have ocean views and their own beach!

One of our more accidental finds (we simply followed the ‘Beach Road’ signs), Beach Point is definitely one of our top choices for choices on PEI. This stretch of golden sand is about a kilometre long with some of the warmest water we found anywhere on the Island.

The ocean is a little shallow to start (there’s a sand bar) but even at low tide we found enough depth to swim in. When not swimming or sunbathing, Beach Point is a great place for a walk. There’s a lighthouse on the western edge and views of fishing boats coming in and out of the bay.

How to find this beach: Beach Point is a 4.5km (5 minute) drive east of Murray Harbour on the southeastern tip of Prince Edward Island. The beach itself is not signed from the main road (Highway 18) so you’ll need to keep an eye out for the gravel turnoff labelled ‘Beach Road.’

Looking for somewhere to stay near Beach Point? Forest & Stream Cottages are highly rated on Booking.com

On the other side of the harbour to Beach Point, Poverty Beach offers another long swathe of golden sand. Poverty Beach is a great pick if you’re looking for some peace after spending time at the busier PEI beaches. This is a wonderfully quiet area with sweeping ocean views.

We found Poverty Beach to be a little more buggy than other beaches in the area. It is possible we were just unlucky but I’d still bring repellent to be safe!

How to find this beach: Poverty Beach is located at the end of the helpfully named Poverty Beach Road, close to the community of Murray Harbour North on Highway 17. The road is narrow but paved almost all the way along, with a parking and turning area at the end.

An off the beyond path gem, Panmure Island is a family favourite. The causeway allows access to both a sheltered bay and the ocean. The latter offers a white sand beach backed by impressive dunes and pristine water. There are supervised swimming areas.

Prince Edward Island’s oldest wooden lighthouse sits Just beyond the end of the causeway. A small fee to access the top is worth it for the panoramic beach scenes. Part of a provincial park of the same time, Panmure Island has a small campground, popular with families looking to escape the crowds at Cavendish.

How to find this beach: Panmure Island is on Prince Edward Island’s eastern shore, just north of Gaspereaux on Highway 17. The provincial park boundary is a twenty minute (20km) drive from Montague, a starting point of the Confederation Trail.

Accessed via a short walk through a path of trees, Sally’s Beach feels like a secluded escape. The light mahogany sands stretch for longer than a kilometre, offering plenty of privacy and space for those who do make the effort to come here.

Sally’s Beach is ideal for exploring at low tide, when it is possible to spot hermit crabs, clams and other sea creatures in the numerous rock pools. It is also a popular place for beachcombing, particularly for those looking for seaglass.

How to find this beach: Sally’s Beach is part of a day-use only provincial park on PEI’s eastern shore. It is a 7km detour from the nearest highway (310). Souris is a 30 minute or 23km drive to the north.

A little hidden pocket of paradise, Little Harbour Beach offers soft, golden sand backdropped by sand dunes. There are no facilities here besides a long dirt parking lot, so bring everything you need for an afternoon by the beach.

The sand dunes at Little Harbour Beach are a vital habitat for the endangered piping plover bird so be sure to keep away and walk only on the wet sand to avoid disturbing them.

There are dozens of more beaches I could name on this best beaches in PEI list! I’m sure any native Nova Scotians reading will have plenty of suggestions for places I have missed. Do let me know in the comments below which are your personal favourites.

Here are a couple more of my nominations for PEI’s best beaches: 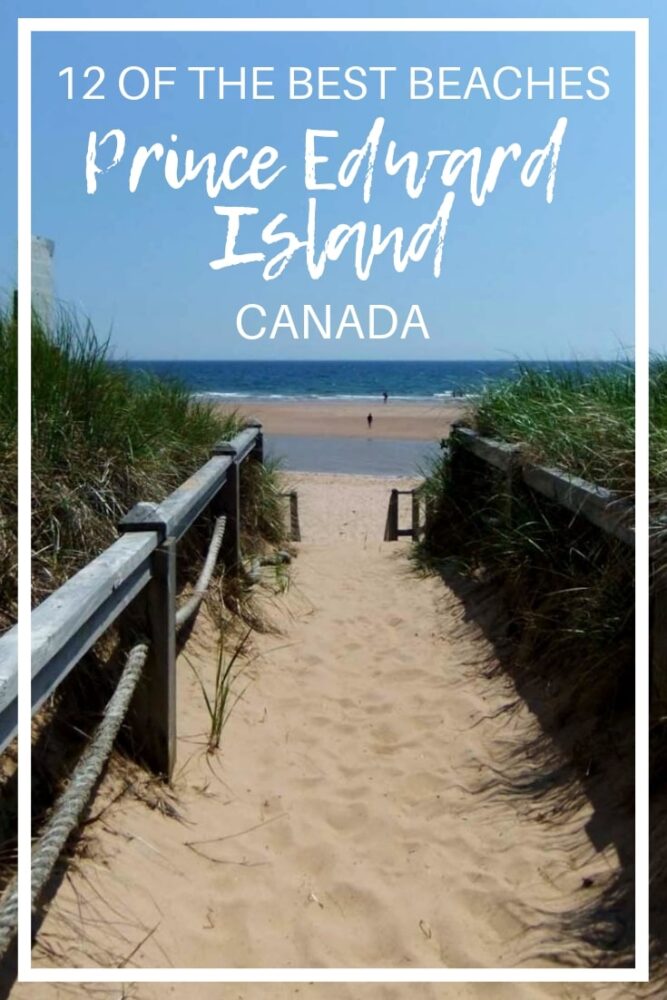 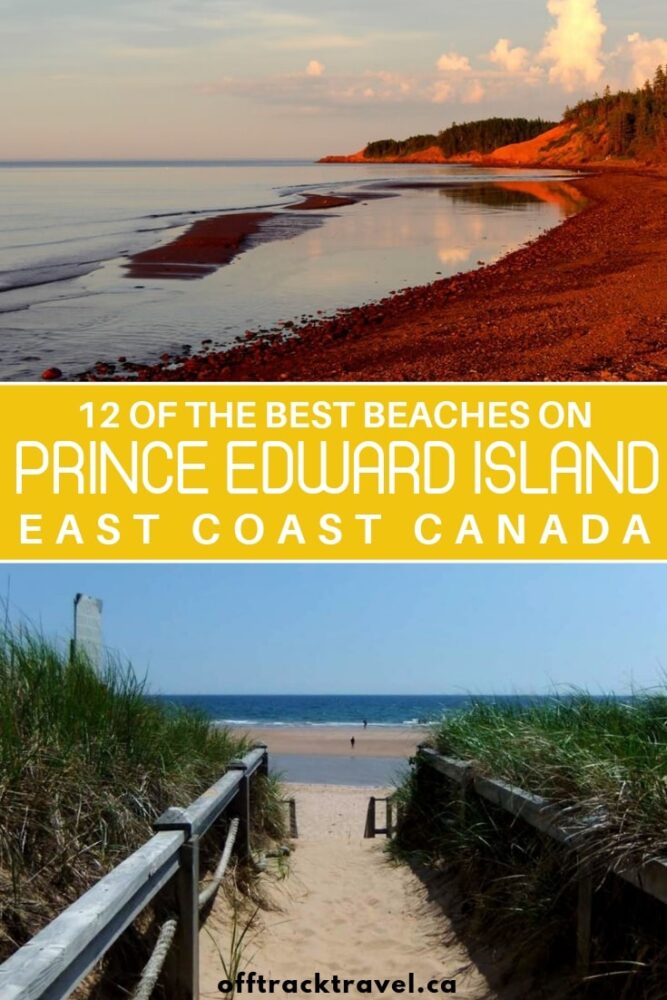 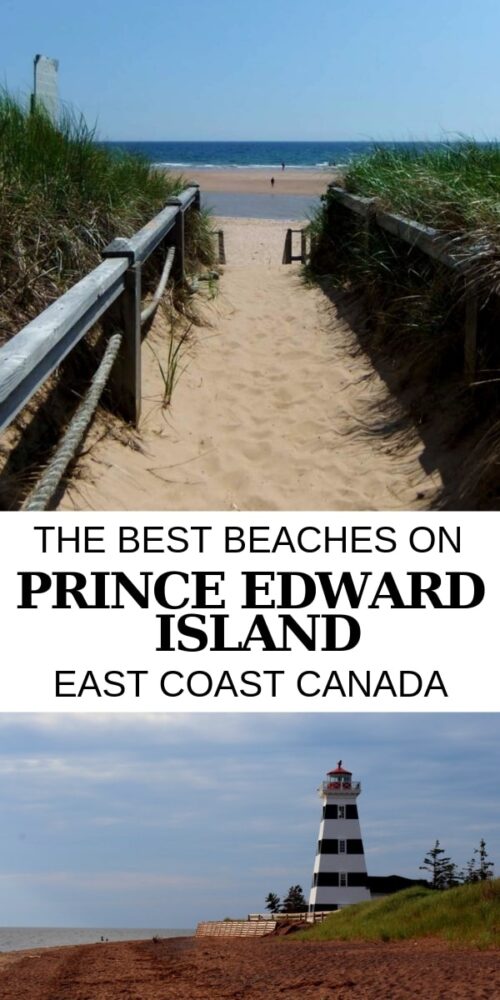 PIN or save this post for future reference with the above images!

Where to Find Big Trees on Vancouver Island, British Columbia