On top of being one of Canada’s most approachable cities, Ottawa is also a fantastic place to visit year round. The reason is simple; there is so much to do inside as well as out!

I’m a proud Canadian these days but even I can admit that the weather in Canada isn’t always as favourable as I would like.

When the weather is rainy, cold or just plain uncooperative, these indoor activities in Ottawa will save your day. Psst, the air conditioning will also be very welcome on a hot, humid summer days too!

The city of Ottawa is located on the southeastern edge of Ontario. Immediately across from Ottawa on the other side of the river is Gatineau, Quebec’s fourth largest city.

The indoor activities mentioned here are mainly found on the Ontario side of the National Capital Region, with a few situated in Quebec.

Navigating around this area is surprisingly easy by car, so don’t be intimidated to explore outside of the downtown area.

This post includes affiliate links. If you make a qualifying purchase through these links, I may receive a small percentage of the sale at no extra cost to you.

Home to Canada’s federal government, Parliament Hill is an essential stop for any visitor to Ottawa. Perched high above the Ottawa river, the inside of these buildings are as impressive as the neo-gothic exterior.

The Centre Block, with the imposing Peace Tower, closed in February 2019 for decade long renovations but the Senate and House of Commons have been relocated close by. Free guided tours are available – reservations are recommended.

When visiting, keep in mind that the security at Canada’s parliament buildings is similar to that in an airport. Allow at least twenty minutes to get through the security screening before your booked tour time.

Go to Jail – at the Carleton County Gaol, Ottawa

Ottawa’s Carleton County Gaol was in operation from 1862 to 1972, after which it was converted into a youth hostel. I say converted, but most of the original features have been left as they were. T

his includes the long, echoey hallways, heavy wooden doors, old jail cells and even the ‘suicide’ bars in the stairways.

Up on the eight floor, the claustrophobic solitary confinement and death row cells still remain. It’s a compelling kind of place and needless to say, a great indoor activity in Ottawa.

To visit the jail, you either need to stay overnight at the hostel or join a guided tour.

Haunted Walk offers two tours to the jail – ‘Ghosts and the Gallows’ (spooky) and ‘the Crime and Punishment Old Jail Tour’ (more historical). While both jail tours start at the Haunted Walks office, a majority of the tour duration is spent inside the Ottawa Jail itself.

The Diefenbunker is an indoor activity in Ottawa like no other! This top secret underground military bunker was built in 1959 to accommodation hundreds of essential personnel (including the prime minister) for a month in the event of nuclear war in Canada.

The four story facility, complete with cafeteria, hospital, dental clinic and decontamination showers, is open for visitors to wander freely.

The Diefenbunker is, to say the least, something of a time warp. Although there are plenty of informative exhibits in the many rooms, I’d recommend taking the guided tour to fully to grips with this fascinating place. The Diefenbunker is well worth the drive out of town!

Visit the Canadian Museum of History

As the nation’s capital, Ottawa has a wealth of museums on offer for visitors to explore. While I could have listed them all here (honestly, you can’t really go wrong), I wanted to give special feature to my favourites.

The Canadian Museum of History is located just across the river from Ottawa in Gatineau, housed in one of the grandest buildings in town.

The lofty entrance hosts an impressive collection of First Nation totem poles, a taster for the exhibits beyond. Interactive, incredibly varied and engrossing, the Canadian History Hall is simply one of the best galleries in any museum in the nation.

Learn at the Canadian Aviation and Space Museum

While the main exhibition hall of planes through the ages could keep flight fans occupied for days, there are some other displays that shouldn’t be missed.

We loved the Canada in Space gallery, featuring real space suits and equipment from the International Space Station.

If the weather improves, keep in mind that there are surprisingly affordable sightseeing flights available (some in heritage planes!) from the museum. It is even possible to fly in a vintage biplane all the way to the Diefenbunker and back!

While most of the museums in town concentrate on Canadian history and culture as a whole, the Bytown Museum puts a spotlight on Ottawa itself.

This small museum, located just next to the lower locks of the Rideau Canal, is housed in the city’s oldest stone building. It’s the perfect place to discover how Ottawa transformed from a rural lumber town to the dignified country capital we know today.

As well as being absorbing, the Bytown Museum is also one of the most budget friendly indoor activities in Ottawa – admission is just $2 for all visitors above the age of five.

Perhaps one of the most ideal indoor activities in Ottawa, escape rooms are themed interactive adventure games involving puzzles and riddles.

Escape rooms are popular around the country, but Ottawa hosts a particularly high concentration. This is great for both escape room fanatics and newbies alike!

We tried out a room at the downtown Escape Manor location, just a few blocks away from Parliament Hill. Although we didn’t get out in time, our experience definitely sparked an addiction to escape rooms!

Read Next: Everything You Need to Know about Gatineau Park Camping, Quebec

Meet the horses at the RCMP stables

With a striking red dress uniform, the Royal Canadian Mounted Police is one of the most prominent images of Canada.

Their black Hanoverian horses, now used for ceremonial duty only, are also a distinctive part of Canadian national identity. Since 1887, the RCMP have performed equestrian drills to the public.

Known as the Musical Ride, the show travels across the country every summer. Both horses and riders (the latter, by the way, are all experienced police officers) train at the RCMP stables, a short drive from downtown Ottawa.

If you time it right, you can join one of the free daily guided tours of the stables and meet some of the elegant horses.

Relax at the Nordik Spa

Whether it is raining or just a little chilly out, the perfect place to warm up in Ottawa in the Nordik Spa-Nature.

Located a short fifteen minute drive away from downtown on the Quebec side, this spa is the largest in North America. It offers a mixture of indoor and outdoor relaxation areas (think saunas, steam rooms, pools, hot tubs and gardens), several restaurants and dozens of massage and treatment rooms.

With so many covered areas, Nordik Spa earns a well deserved spot on this list of best indoor activities in Ottawa.

Wine touring wasn’t the first activity that came to mind when I thought about Ottawa, but there are actually haf a dozen wineries in the local area. What would be better on a difficult weather day than a drop or two of wine?

You can either do a self driving tour (also adding in a local distillery, brewery or cidery as preferred) or join a organised wine tour.

The latter often includes all tour tasting fees as standard plus food pairings along the route. We enjoyed wine tasting at Kin Vineyards, located very close to the Diefenbunker (above).

Not keen on wine? Ottawa has guided brewery tours on offer too.

Rideau Hall is the official residence of the Governor-General, the queen’s representative in Canada. The majority of the rooms in this grand 175 room stone villa are used for state affairs, such as receiving foreign heads of state.

Free guided tours of the property are available daily (reservations required outside of summer).

The 79 acre landscaped grounds of Rideau Hall are also open for visitors to explore, as well as an interpretive centre. A fun fact – the current Governor-General of Canada is Julie Payette, a former astronaut with 25 days logged in space.

The best museums in Ottawa

The museums mentioned above are only a taste of the wide choice of museums in Ottawa. Other options for difficult weather days include:

Looking for somewhere to stay in Ottawa? 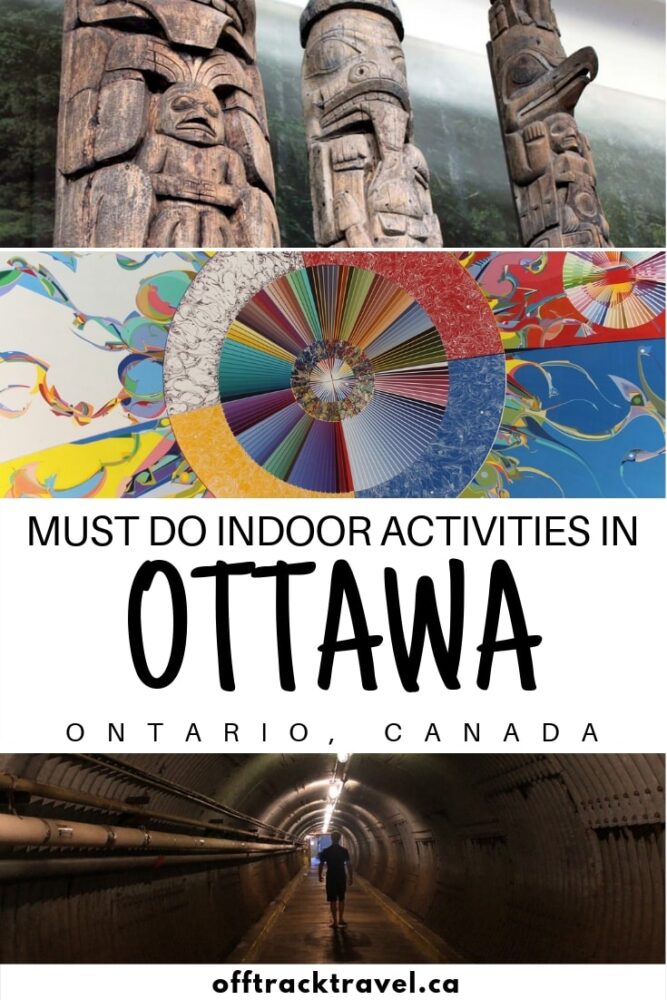