Although the main part of summer is over, we haven’t stopped camping! We have, however, started to get a bit lazy with camping food, and have recently just been trying to cook most of our meals on the campfire.

I’ve actually been honing my campfire building skills this summer which I’m pretty proud about, though I admit that I’m not quite a wilderness warrior yet and still rely on matches or a lighter to start it!

Cooking on a campfire

Cooking on a fire saves on bottled gas, washing up (my excuse) and makes buying food for the trip super easy (we have most of it at home anyway). I find that for the most part, it takes a lot less effort too.

We’ve been enjoying cooking on campfires so much that we did it at home last week as well; there’s something so nice about sitting outside as the sun goes down and waiting for a feast to cook!

The trick to campfire cooking is lots of tin foil. Tongs are really helpful too, although if you have a chef (with ridiculously desensitised hands) in the family like we do, they are not essential.

If you don’t have a grate above your fire pit, don’t panic, you just need to get a bit inventive. Here’s the fire we had at home last week – the logs either side survived until we were done eating. 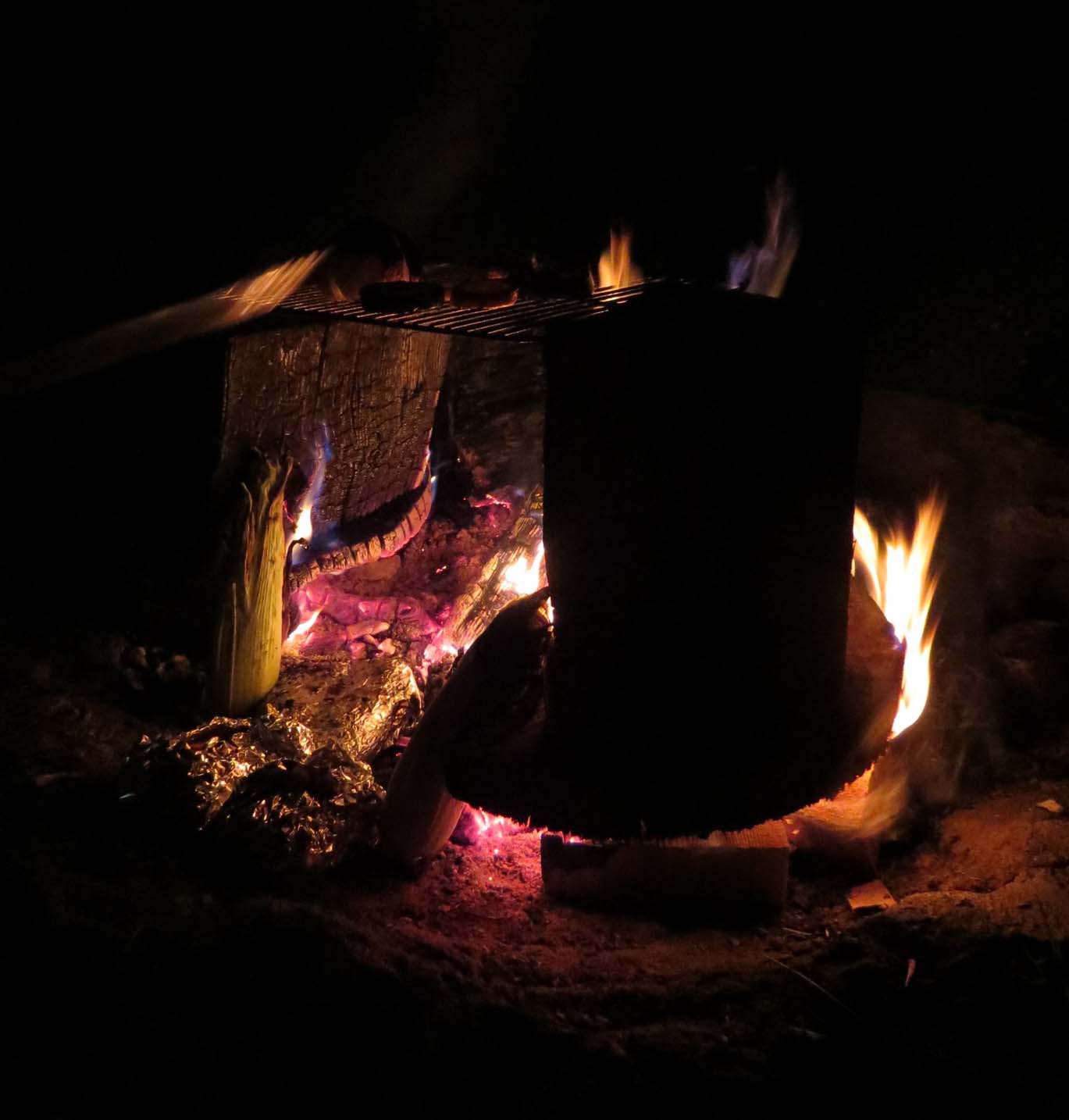 So what do we actually eat?

For the most part, lots of vegetables. Anything we have in the fridge at home we bring with us; peppers, courgettes (zucchini), aubergine (eggplant), onion, garlic, mushrooms etc.

This summer we have really been enjoying corn on the cob (and enjoying the price as it continued to go down and down), and this you can just stick in the fire with the husk still on. Although you could take the husk off and grill it on the grate, we prefer keeping it on, keeping the corn inside nice and moist.

Cooking steak on the fire

Jean Robert usually likes to have steak on trips, as he doesn’t usually have it at home and also because it is ridiculously easy to cook (he prioritises this at the weekend).

It’s one of the last things that we put on the fire as he likes it pretty blue and I’m not too keen on meat juices. Talking of inventive cooking techniques, while camping near Port Alberni JR had to made do with cooking his steak on a stone as we had no grate. Apparently it worked pretty well! 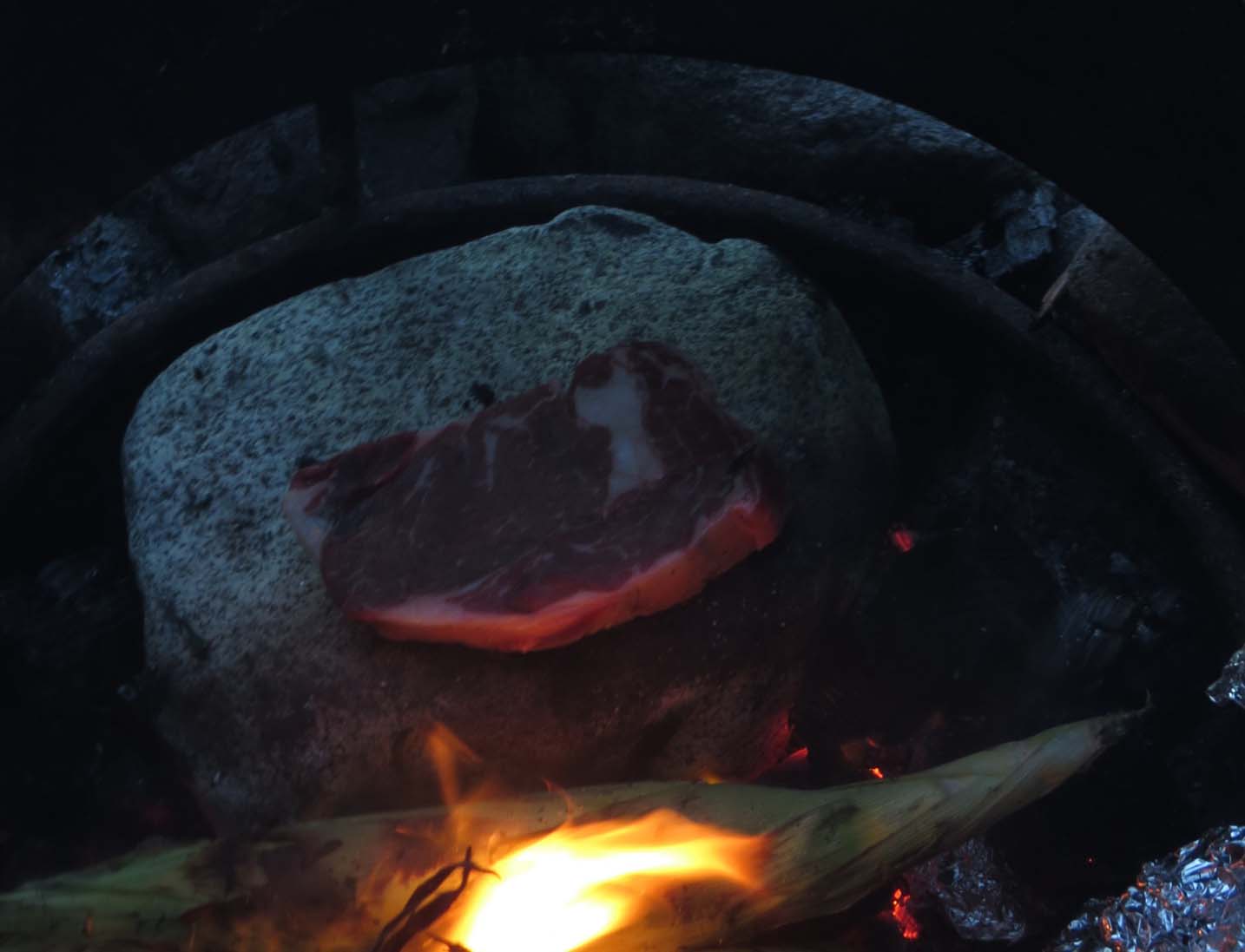 My own treat for camping is a bit of halloumi cheese, which a Greek Cypriot cheese (also known as ‘squeaky cheese’…) that doesn’t melt when being cooked.

It’s still pretty new in Canada and especially a bit unknown on Vancouver Island so I was pretty happy when I found it in Superstore to buy!

The halloumi sold here isn’t actually the ‘real’ stuff (it’s sold as ‘Halloom – Mediterranean inspired semi soft cheese’) and has to be cooked at a pretty high heat to retain its shape. I find it easiest to cut into cubes and then put on a skewer to grill.

Sometimes we will also make a quick garlic bread to wrap up in foil and then throw into the fire. Any kind of bread will do, but we especially like it when we can buy the artisan baguette style bread from Superstore that always seems to be half price after 4pm! 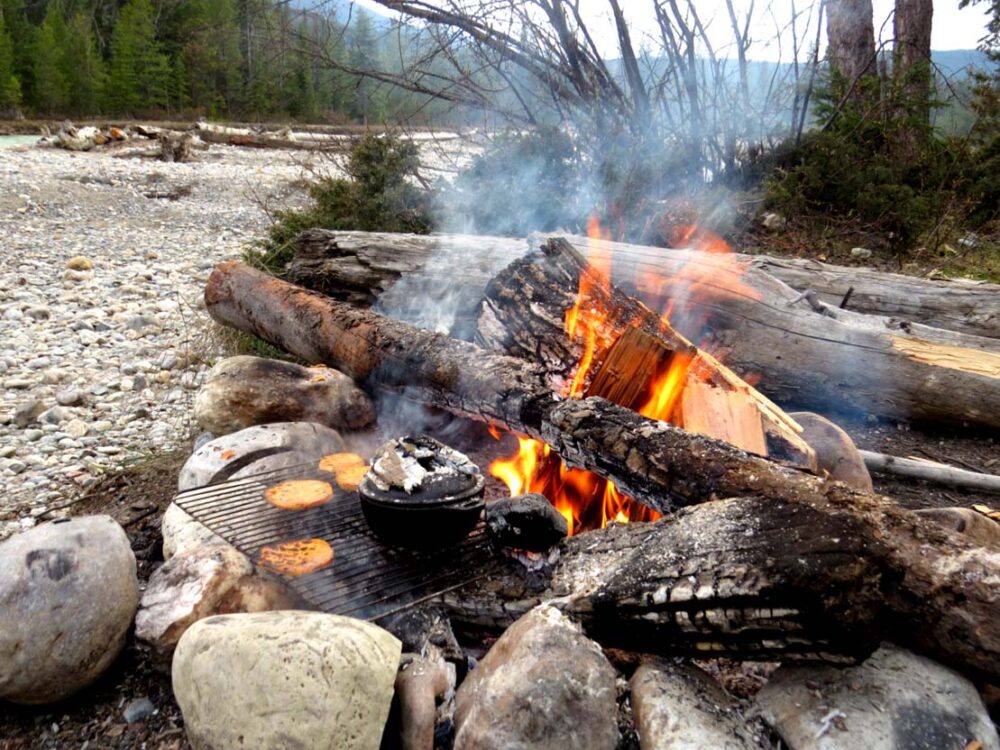 Finally, while you’re building your fire and then waiting to eat, it’s great to have a little something to eat with some drinks. For this, I make some campfire salsa, which is both really cheap and easy to make.

Chop a few Roma tomatoes in a bowl or plastic container, and add then a bit of onion, some garlic, chili (flakes will do), coriander (cilantro) if you have it and lastly salt/pepper. Coriander costs under $1 for a huge bunch, and everything else is basically pennies.

So much cheaper than the stuff you can buy for $3-5 that has more obscure ingredients than the ones I listed! If you have more time/light you can chop everything up so much more finely than I have here.

Now I’m a bit hungry for a campfire feast – good thing we have a camping trip soon, hey? Let us know if you have any campfire tips of your own, or some different foods that we could try out!

Read Next: The Best Food for Car Camping and Road Trips 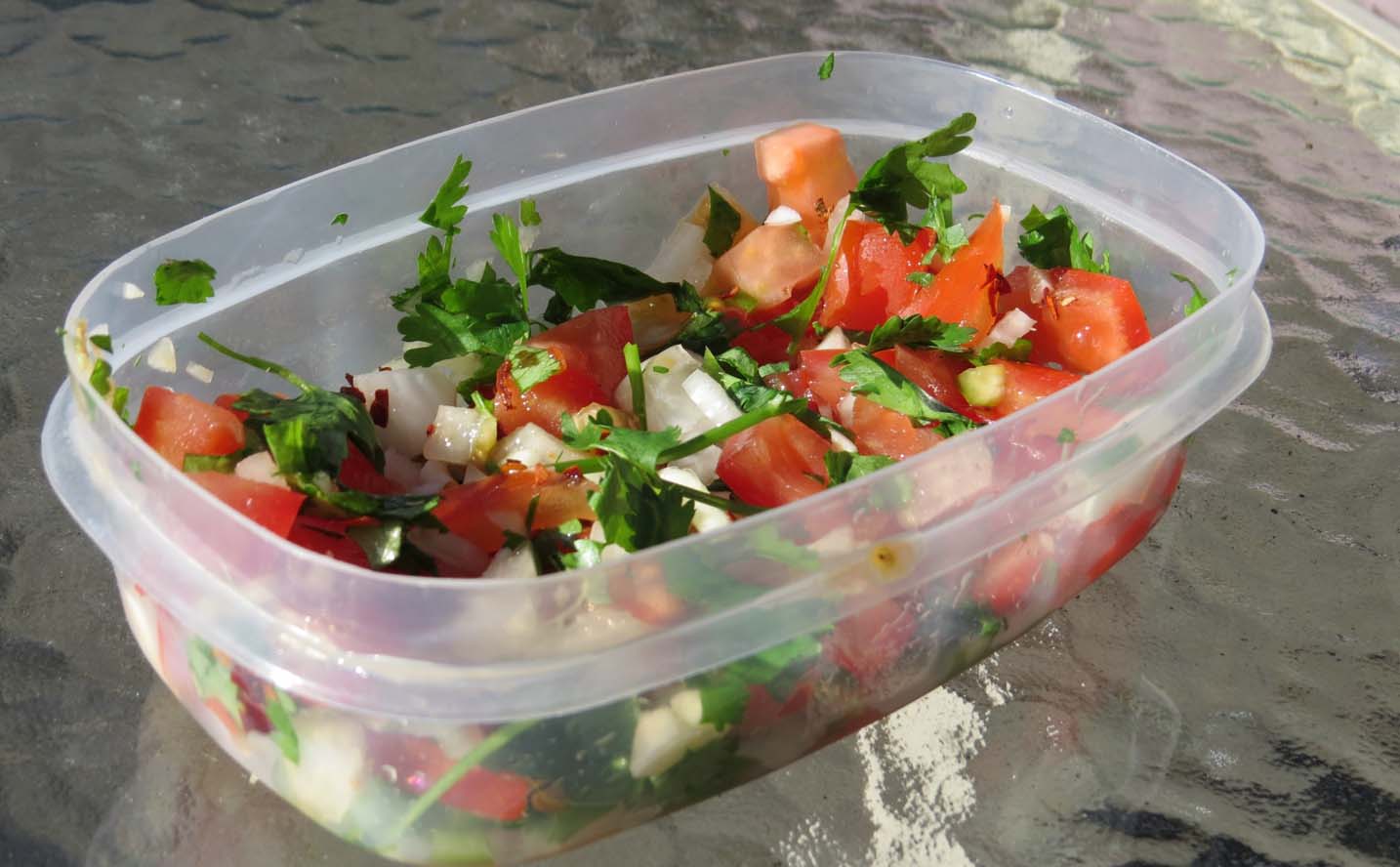