Described as the “world’s most powerful solar charger”, the SunJack Portable Solar Charger provides USB power wherever you need it. Being that we are outdoors as much as possible but still rely on electronics to record our adventures and contact others (usually to talk about said adventures), this seemed like the ideal product.

I’m going to say it upfront – it actually really is. Remember the time we travelled around Western Canada and Alaska in our van for five months? What I wouldn’t have given for one of these solar chargers then….

Let me back up a little. SunJack’s 14W+8000mAh charging system comprises of four solar panels sewn to a rugged folding case plus a removable battery pack. The system offers the choice of either directly charging USB devices while in full sun (around 90 minutes for the average smartphone) or loading up the battery instead (five hours), to provide charging power on the go.

In fact, both the battery and one other USB device can be charged at the same time. The battery holds enough energy to fully charge four smartphones. Pretty impressive for such a relatively compact solar panel system.

Folded up, the SunJack measures 27cm x 22cm x 5.1cm – it’s not that much bigger than my Kindle (or the Nalgene, as pictured). There is a net pocket on the back of one of the panels, enclosing the two USB ports for charging. This prevents the attached battery pack or another device from dangling or moving around while charging.

The system comes with two carabiners, helpful for hanging the solar panels to get the best of the sun’s rays. On the back of the slim battery is five lights. These flash and light up as the battery is powered up; handy to see how well it is charging. 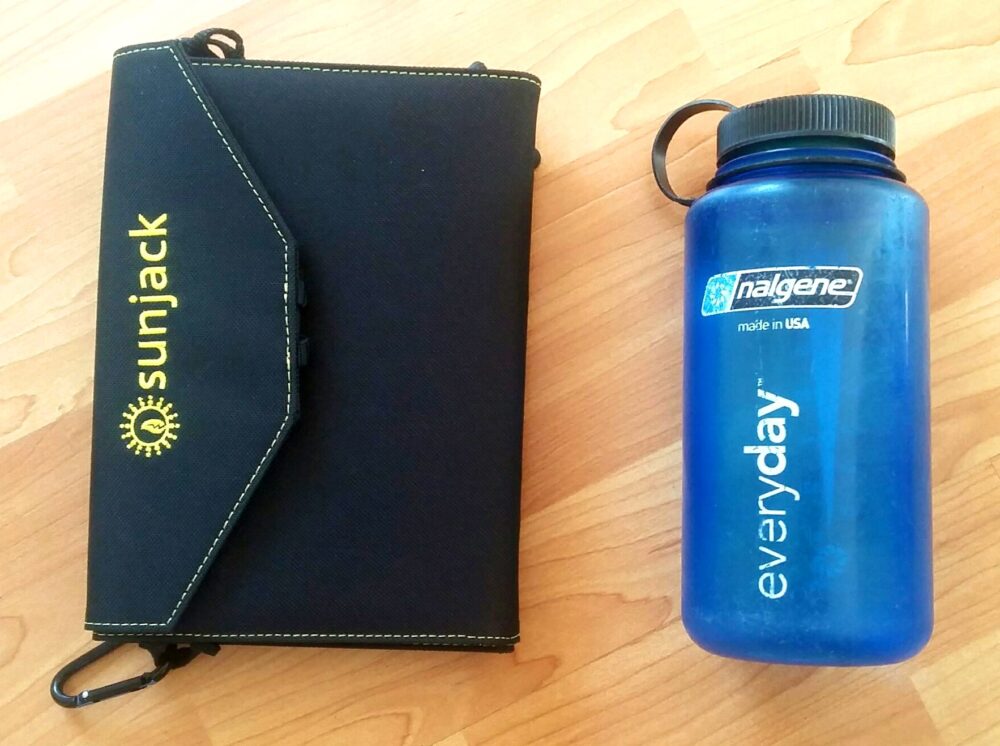 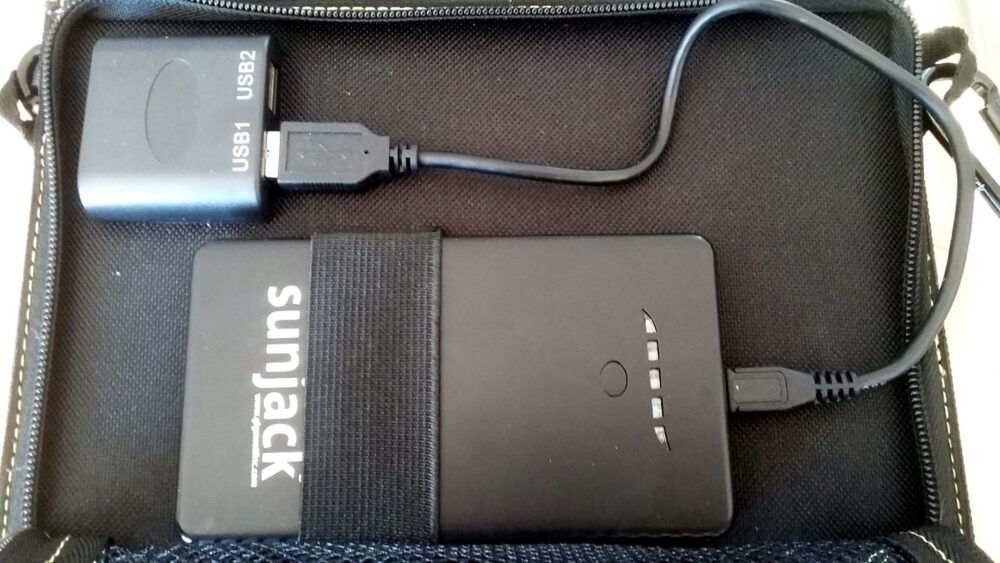 Receiving the SunJack just at the beginning of summer in one of the sunniest areas of Canada means we have had plenty of opportunities to test it out, both on the road and at home. While we haven’t been on any month-long road trips lately, the SunJack has still proved its worth on short trips to Vancouver Island and around the Okanagan Valley.

For the most part, we have been using the handy battery to recharge our smartphones. With these little devices being used for photos, social media, calls and texting (often work related), having a compact battery backup is super helpful.

Charging with the SunJack is super fast – we actually find that it charges our smartphones about 30% quick than plugged into the wall. Seriously! 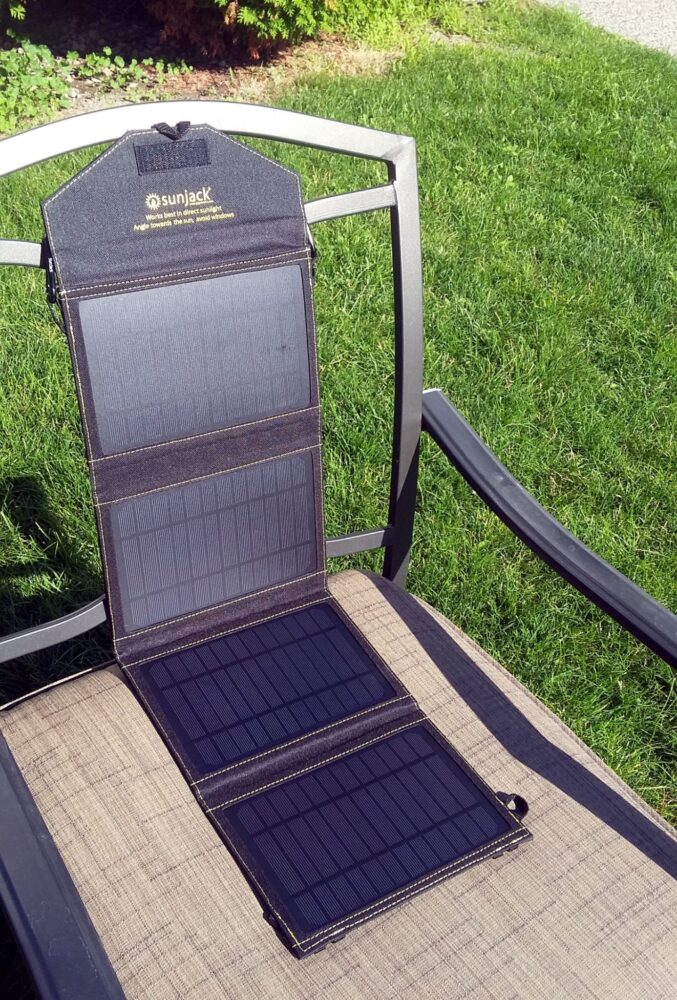 While travelling for long periods of time we usually use an inverter in our van to charge electronics. The trouble with this though is that it requires the van to be running. Since we prefer to travel slowly, often stopping three or four days in one place, this can be a problem.

We have a prioritisation system for charging electronics while driving and the laptops come first due to needing them for work and blogging.

Having the SunJack on long road trips is going to make such a difference for powering small devices; no more getting to a destination to be disappointed that I didn’t manage to charge my Kindle!

There are a couple of other reasons why I love the SunJack. The first is for emergency preparedness. The second is for longer backcountry trips. While I doubt we would ever take the whole solar panel system on a backpacking trip (at 907g, it’s on the heavy side), there is potential for using it on a canoe trip, such as our two week paddling adventure from Whitehorse to Dawson City..

We really had to conserve our camera batteries while on that trip to make them last; with the SunJack, we could take more photos with our phones and then charge them regularly. 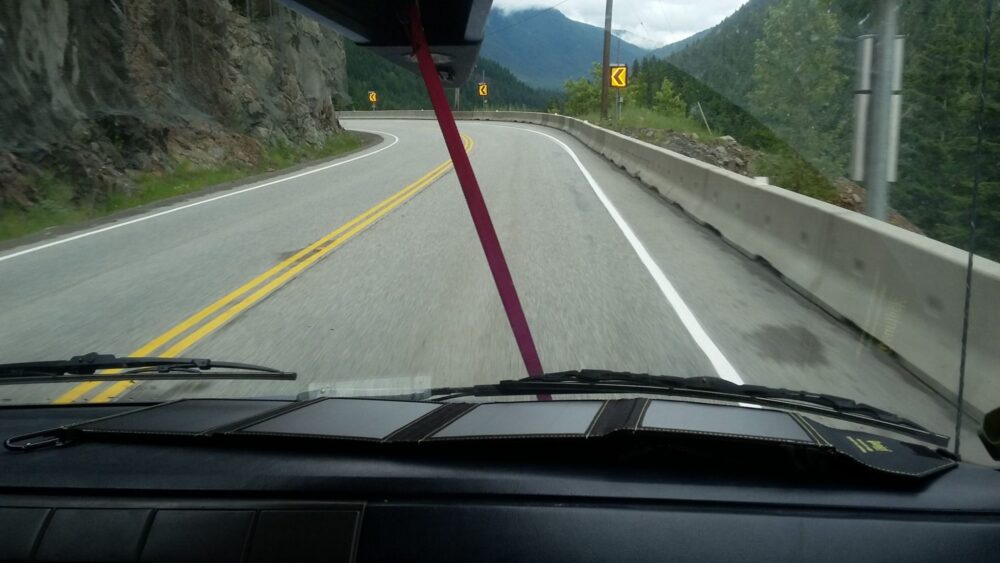 Final thoughts and where to buy the SunJack charger

The SunJack has the potential to really improve our extended road and paddling trips. Weather resistant and durable, it is built well and is likely to last us a good number of years. I was very impressed with how fast it charges small devices. I can’t wait to try it out properly when we’re next on the road….watch this space!

If you’d like a SunJack 14W Solar Charger for yourself, head on over to SunJack’s website now.

I received the 14W Solar Charger for free from SunJack as coordinated by Outdoor PR;in consideration for review publication – all thoughts and opinions (as always) are my own.

18 Must Do Revelstoke Attractions and Activities

14 Unique Things to Do on the Sunshine Coast, BC