For the second week in a row, we travelled south for a weekend trip. We also stayed on Vancouver Island proper, not venturing out to a new island-from-an-island.

This trip down to Sooke had, in some ways, been in planning since May, after we bid for ziplining tickets in a silent auction. We forgot about it until we were contacted in July and told the tickets were ready whenever we were.

It’s a little while away (3 hours drive) to go to just go ziplining, so of course, we made it an excuse for a weekend away. And what a weekend! 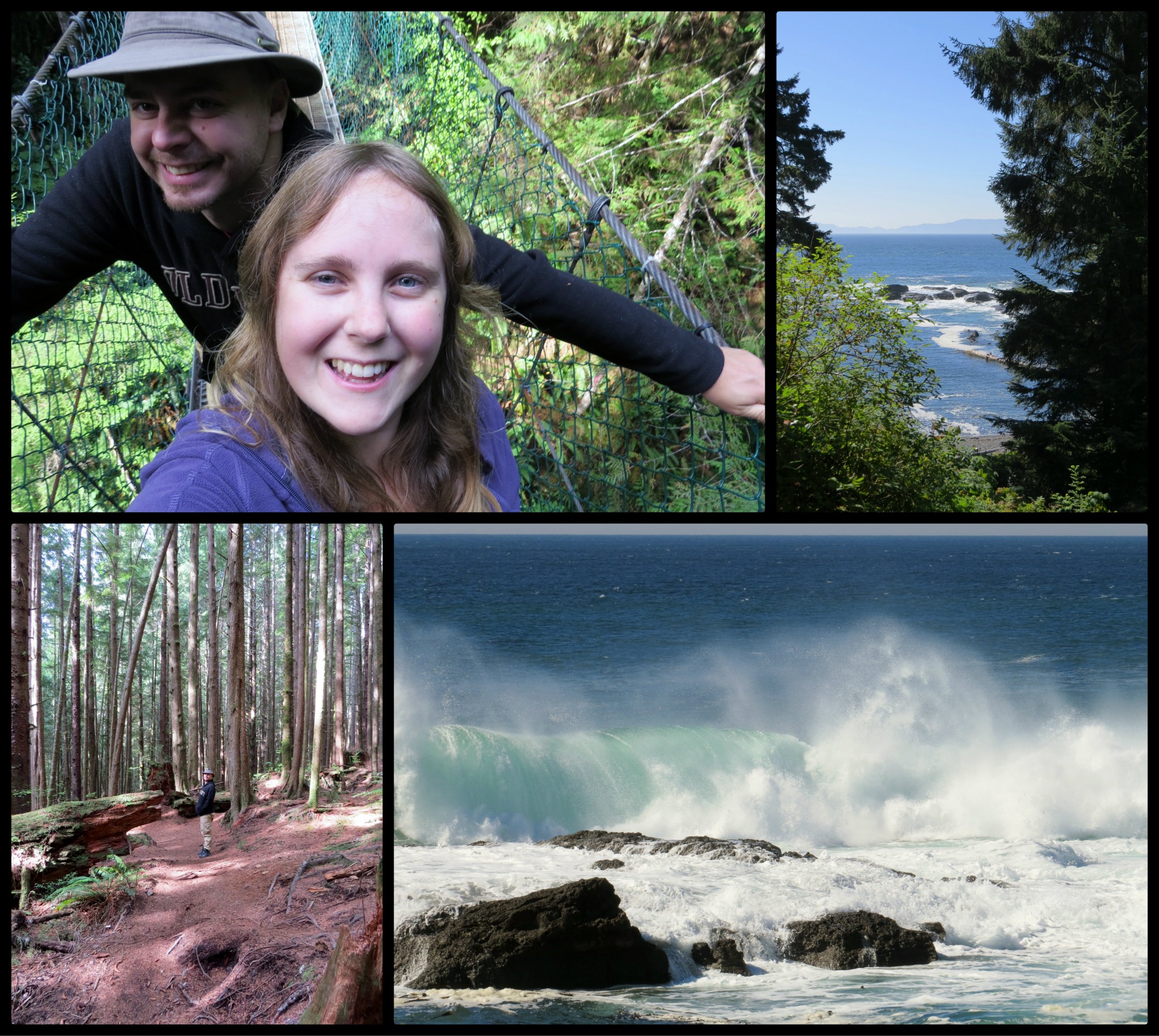 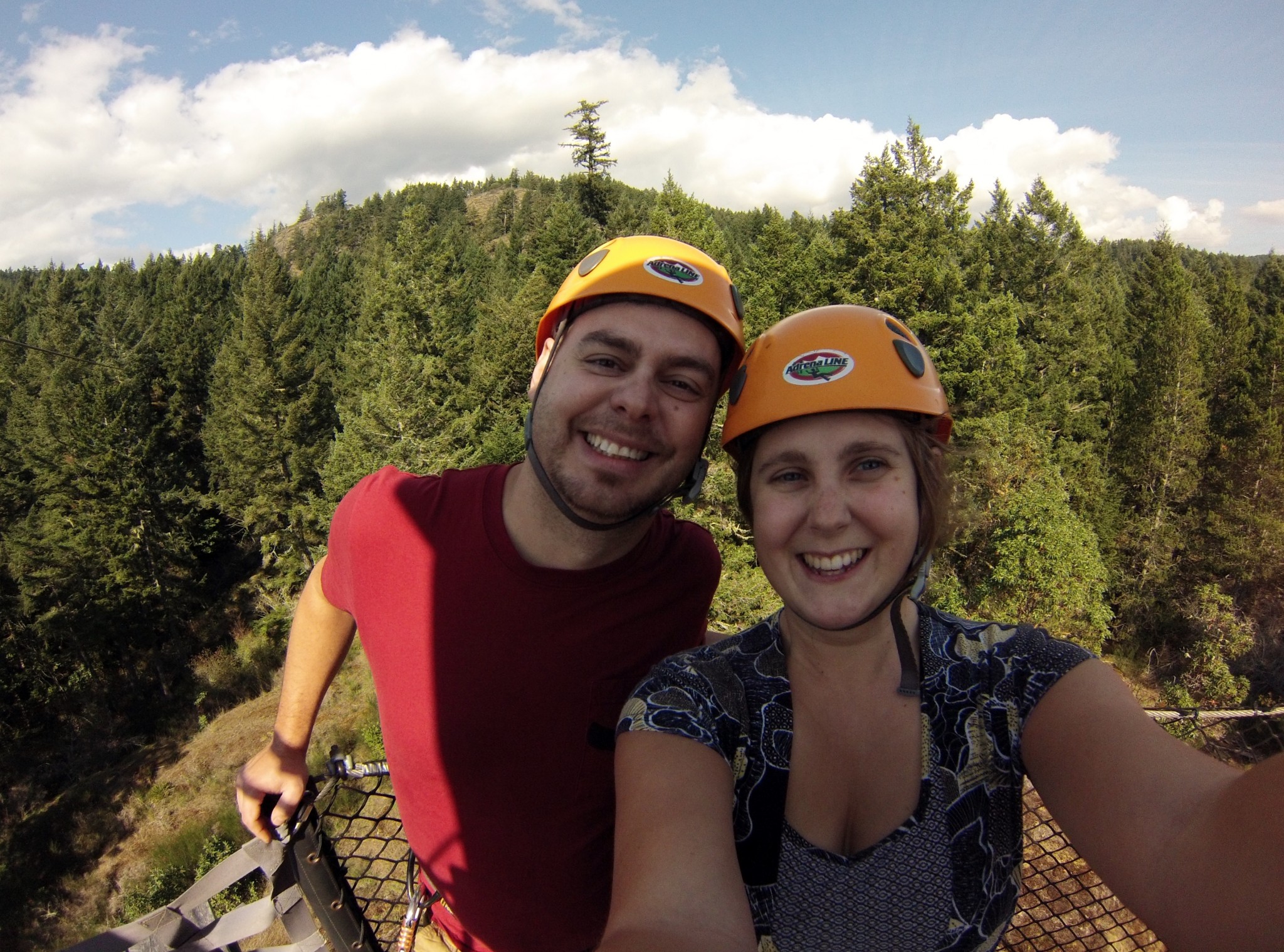 Ziplining was super fun; there were 8 lines in all as well as a suspension bridge. Even the ATV ride up to the start of the course was an experience; it was an old German military vehicle in which you definitely needed to hold onto the restraints!

Ziplining wise, I learned how to go faster, upside down….and both at the same time, naturally. I LOVED the long zipline and felt spoiled after that; the shorter ones weren’t long enough!

It was different (and great!) to do an activity that really doesn’t require much effort or skill at all, compared to, say, caving, canoeing, hiking etc. The staff are really friendly and make it easy for anyone to do. I would have liked to try the night or full moon ziplining they offer later in the season. Highly recommended by us! 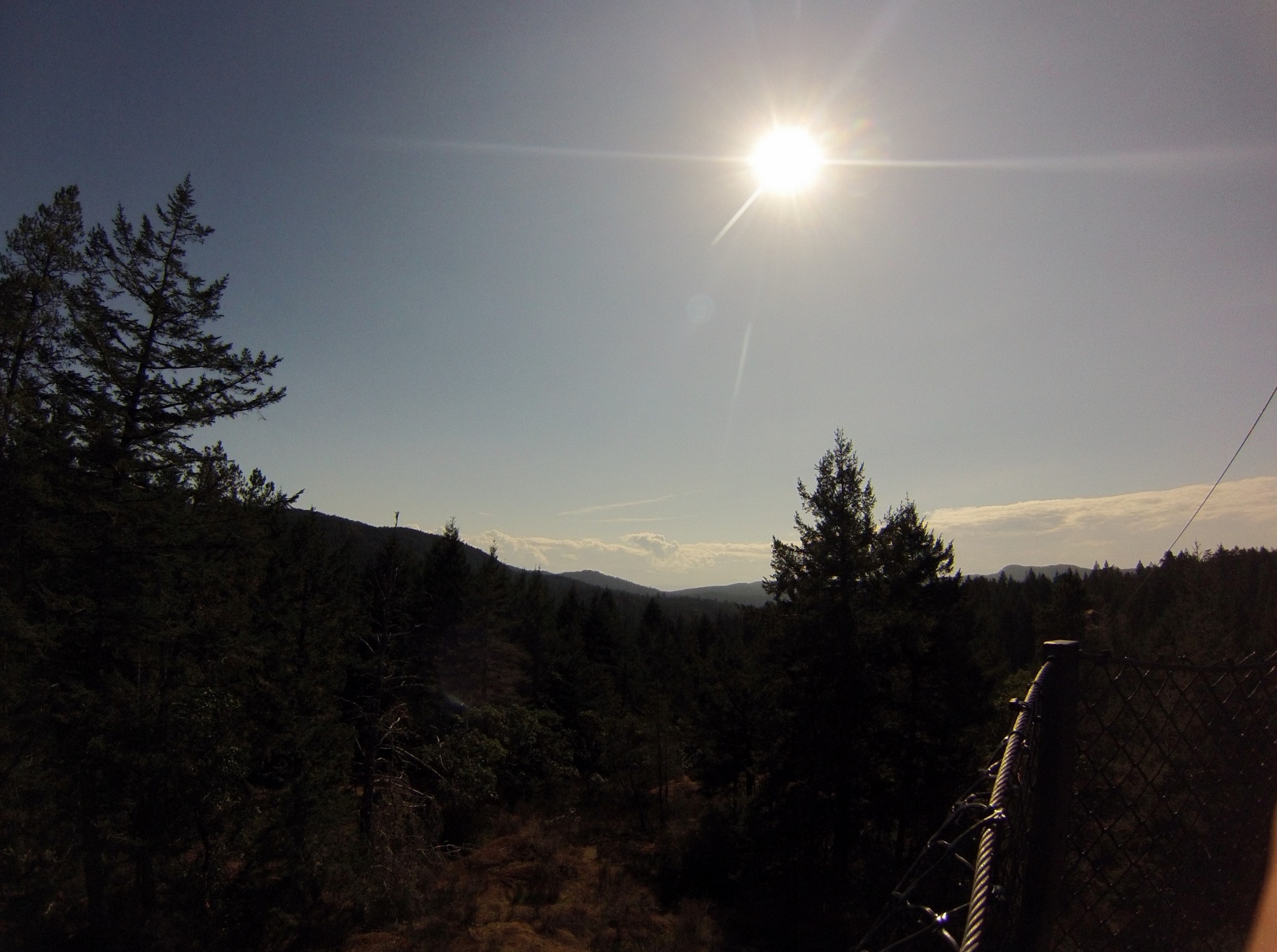 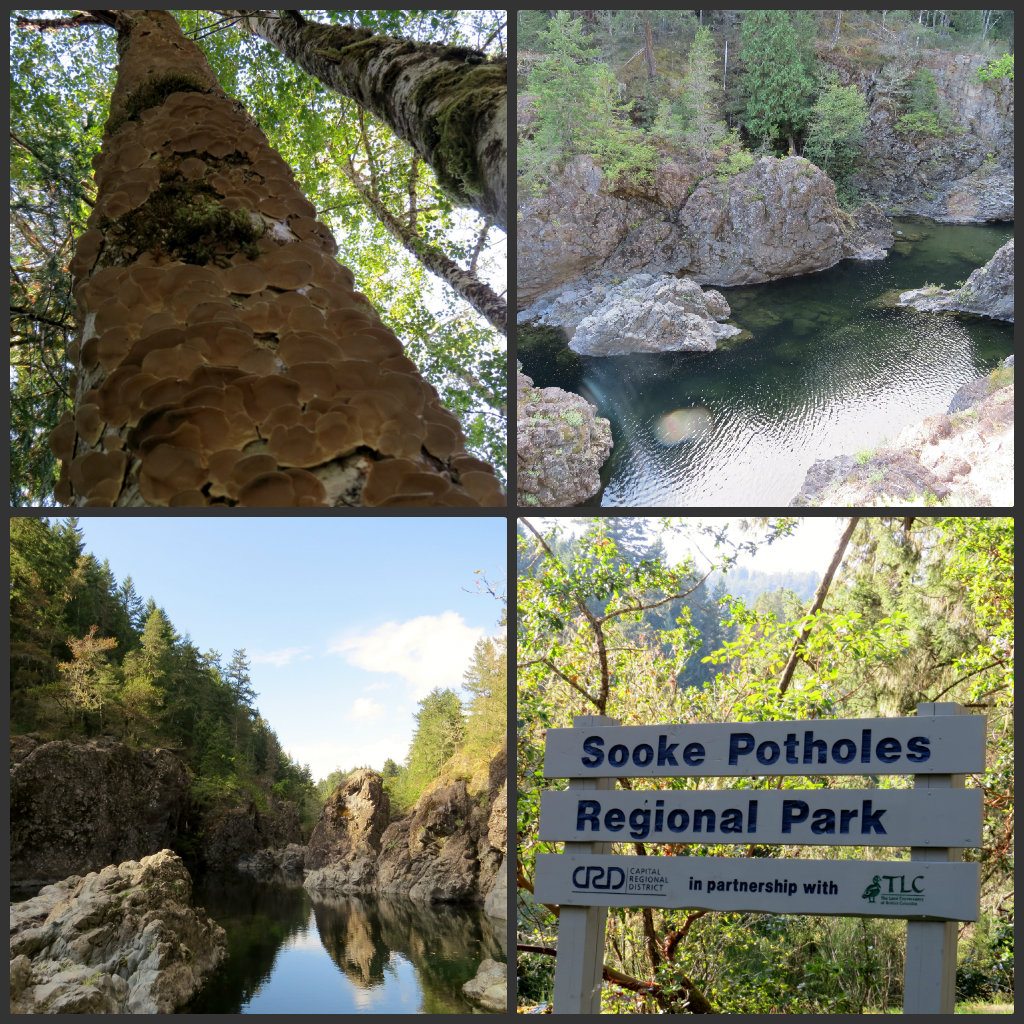 From ziplining, we headed west towards Sooke itself, and followed the signs to the Potholes, which I’d heard was one of the main attractions in the area. It’s a river valley with plenty of waterfalls, swimming holes and cliffs. The further you go along the dead end road, the higher it gets, and it reaches some great viewpoints of the entire valley.

This was a really lovely place to unwind after ziplining. I can imagine it being very busy in the summer, with so many places to swim and relax.

Before Sooke, there were only flashes and glimpses of the coast that were so relatively close. After passing through the town the road becomes progressively windier and the views of the Pacific open up. The few houses are outnumbered by picture perfect beaches, facing out to Washington State, that seems so relatively close from here.

We were planning to camp at China Beach Provincial Park, but the campground was already closed for the season. I don’t think we would have stayed here anyway, as only 5km before we had spotted another place to stay an absolutely unbeatable location.

We were planning to camp at China Beach Provincial Park, but the campground was already closed for the season. I don’t think we would have stayed here anyway, as only 5km before we had spotted another place to stay an absolutely unbeatable location. 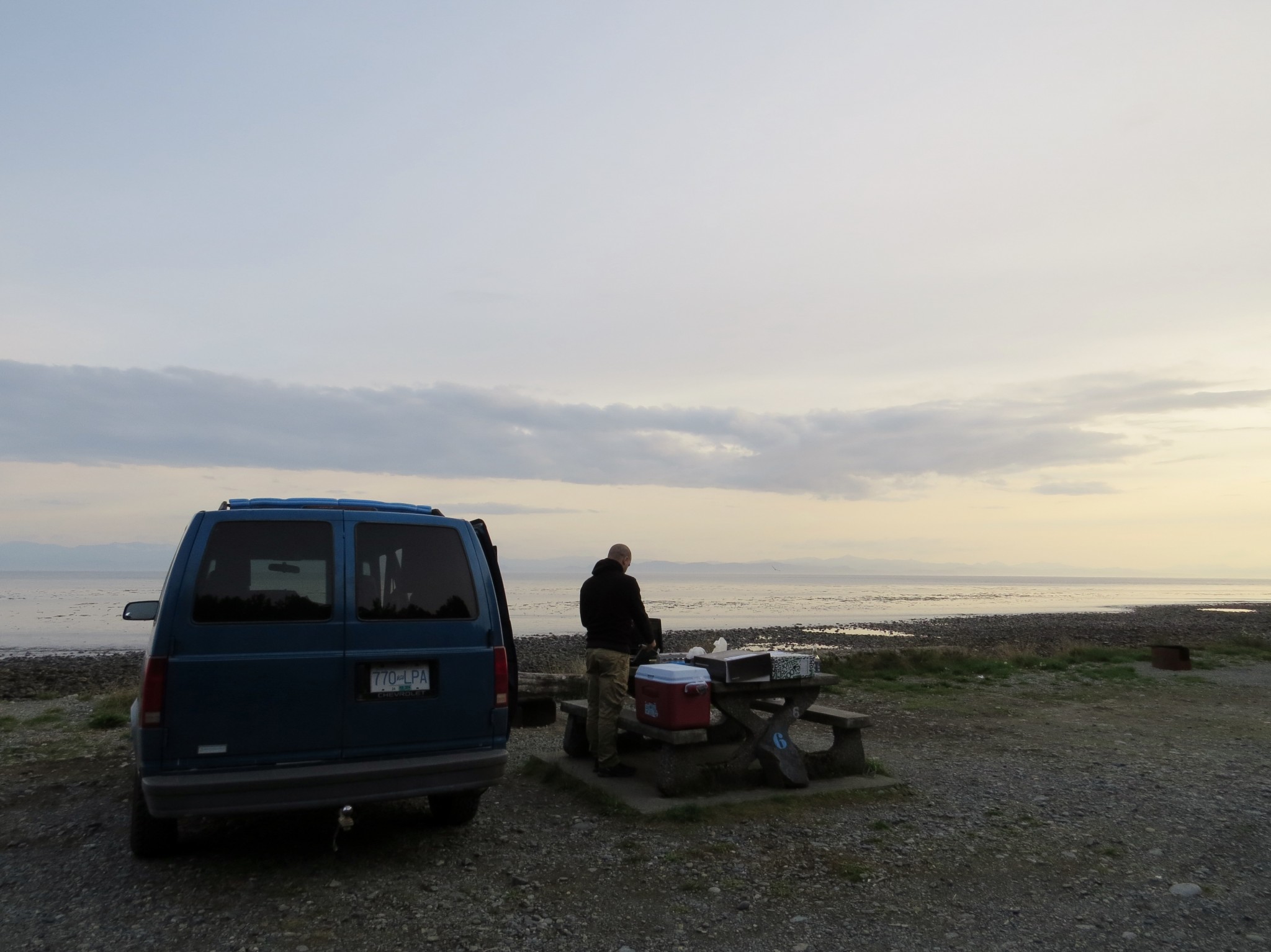 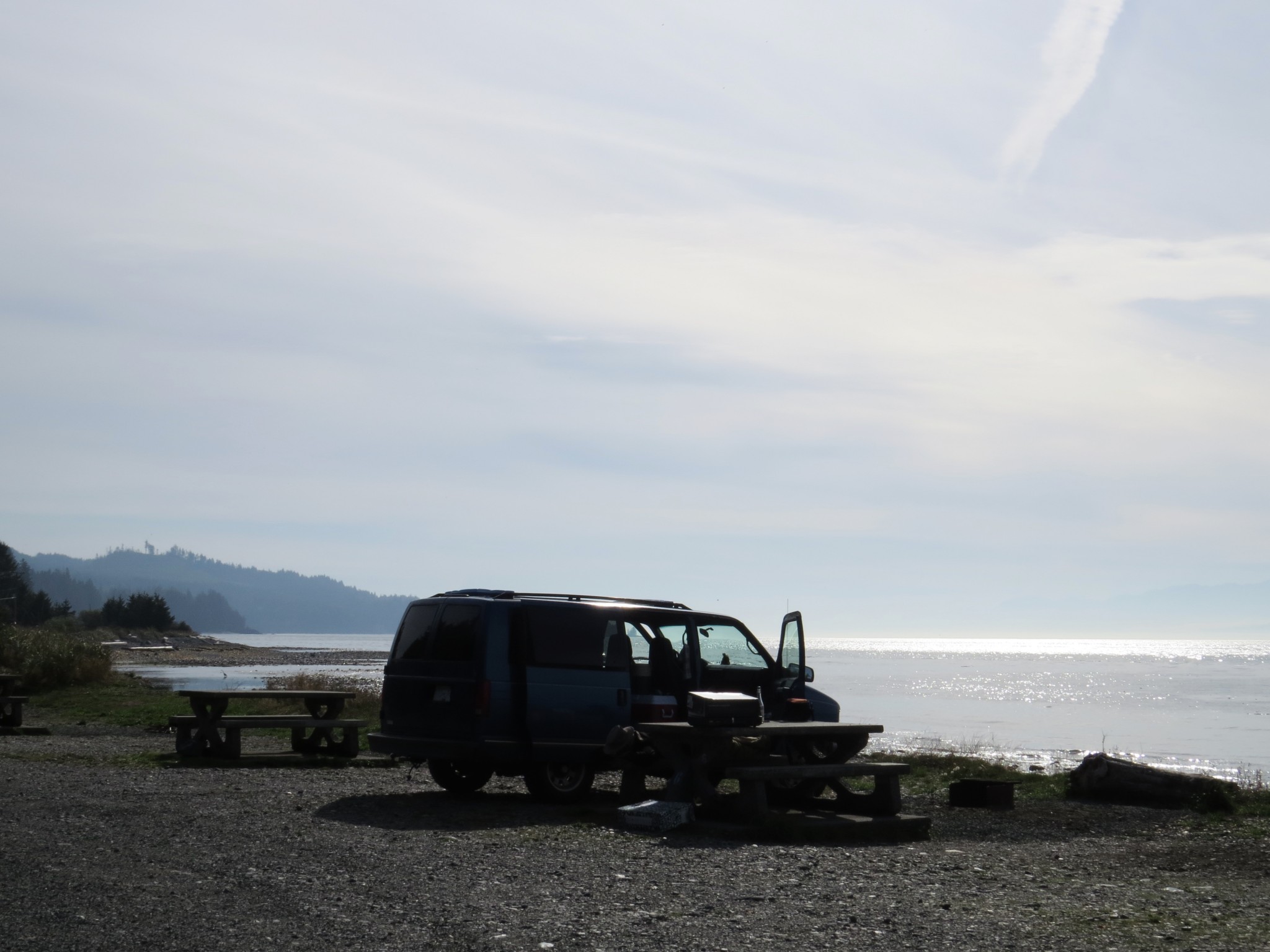 This is Jordan River Regional Park campground, located right on a stony beach with views of Washington State and passing ocean traffic. Amazing! What a perfect place to stay on our short trip to the south-western coast.

We did have to pay $15 to stay here though we almost had it for free. Initially, we thought it was too late in the season for Regional Park staff to be collecting (especially when no-one turned up by the time we went to bed), but someone turned up while we were eating a late breakfast.

Like last week, we didn’t really have any problem paying this small fee when it was such a fantastic place to be, but it’s funny that we had a whole summer of free camping but paid twice in September!

We had some camp visitors that night; as soon as we put out our fire, three local cats climbed in and snuggled with the embers. Cutest thing I’ve seen camping recently! 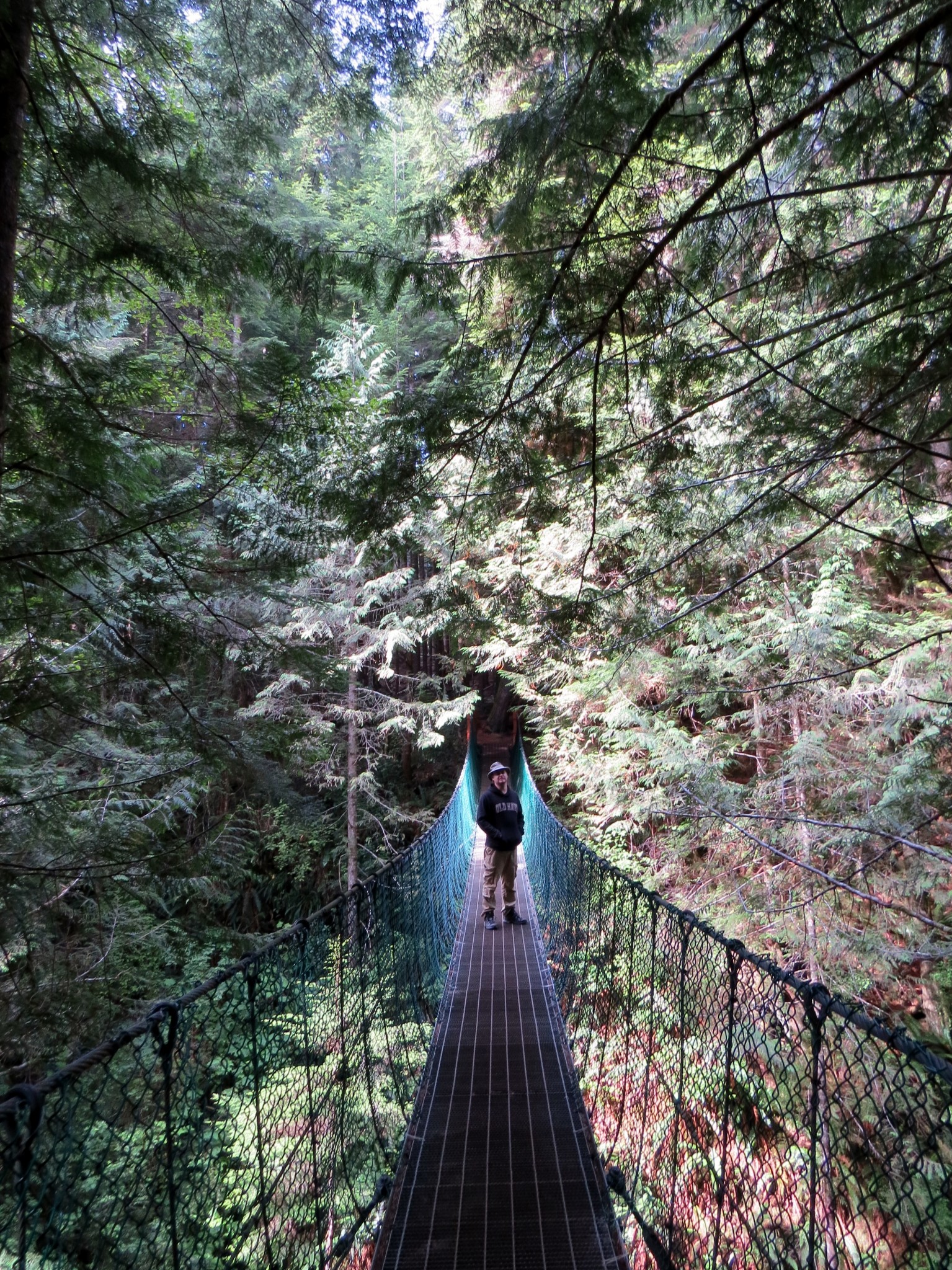 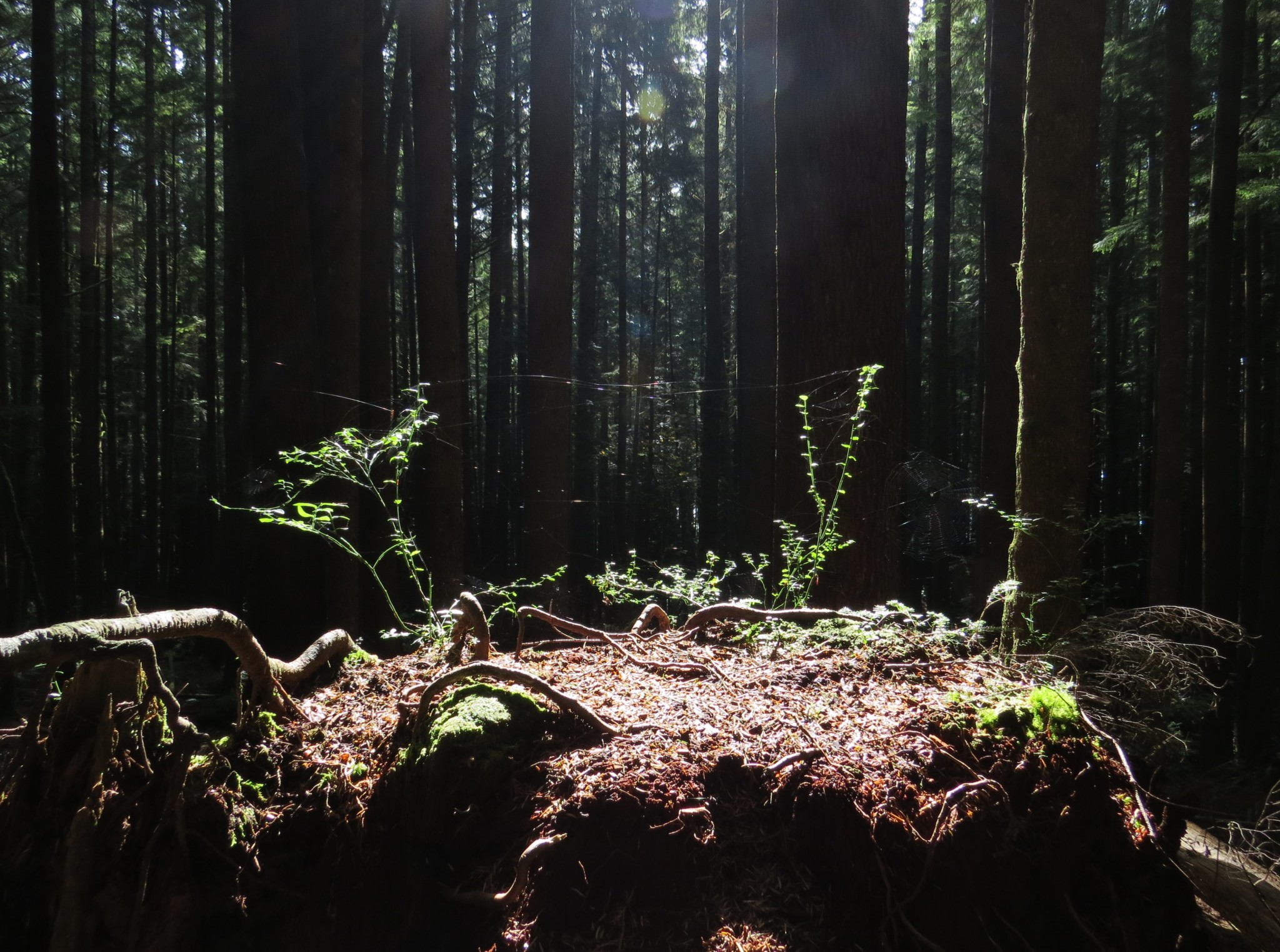 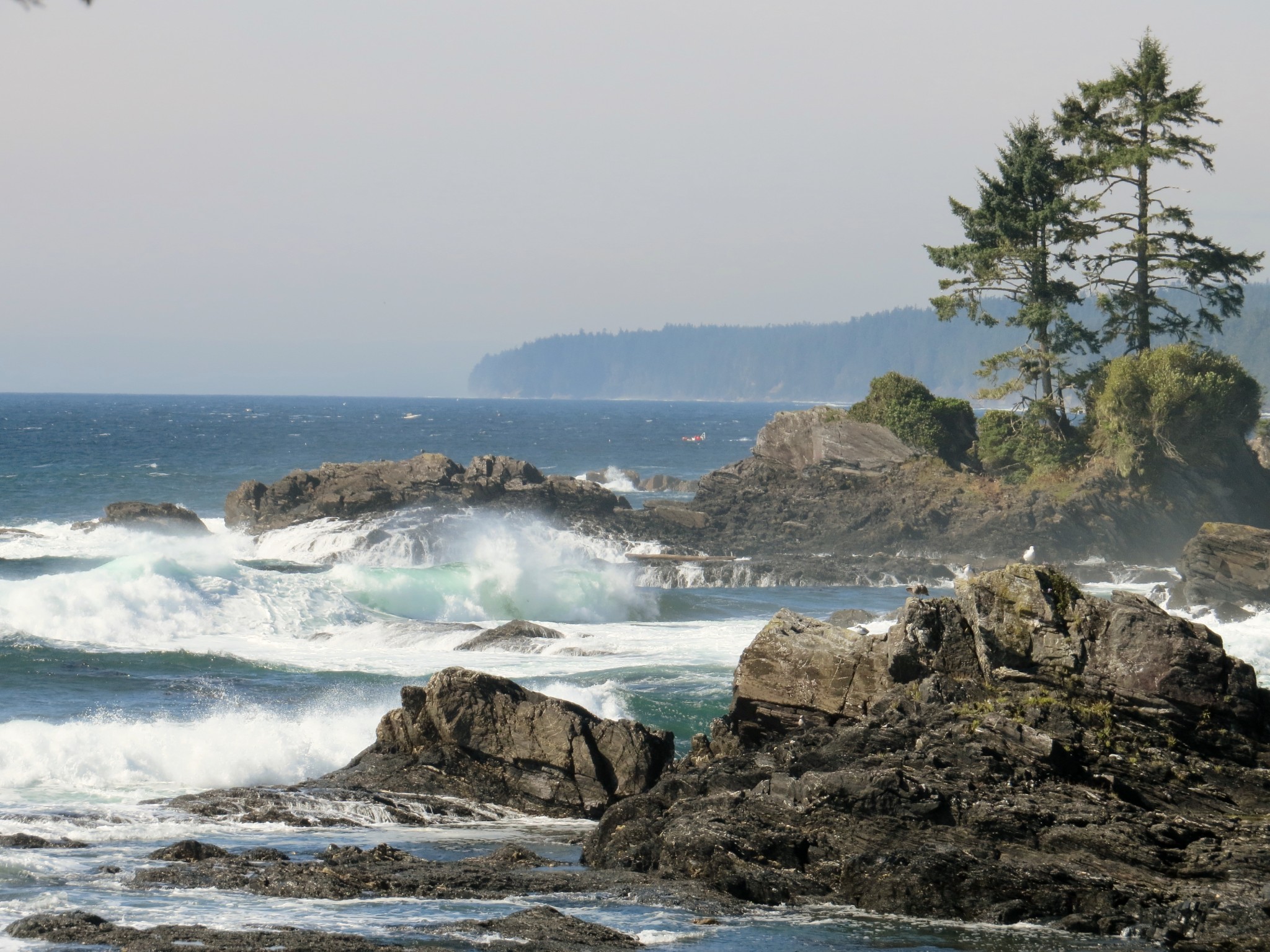 The next day was another beautiful one, so we took the short drive to the day-use area of China Beach and walked a couple of kilometres on the Juan de Fuca trail. This is a 47km wilderness hike along the coast starting (or ending!) at China Beach. I mainly just wanted to see one of the suspension bridges on the route!

Continuing along the coast (by car, needless to say not via the Juan de Fuca trail!) we kept having to stop for more stunning views, and then finally at the parking lot for Botanical Beach, which is pretty much end of the line. After the nearby town of Port Renfrew (which is very small), the road heads north and then east, away from the Pacific.

Botanical Beach provides the quintessential West Coast experience, with crashing waves, windswept beaches and a rocky landscape. This area is rich in tidal life, and there is always the potential of seeing whales

I’m not sure why Jean Robert just took a photo of half of my head (below). Must have been distracted by all of the ocean action. It’s a pretty wild place to be, I can’t imagine what the Juan de Fuca trail is like on a mildly stormy day! Needless to say, it’s a beautiful area, with very little development, especially when compared to northern neighbours Tofino and Ucluelet. 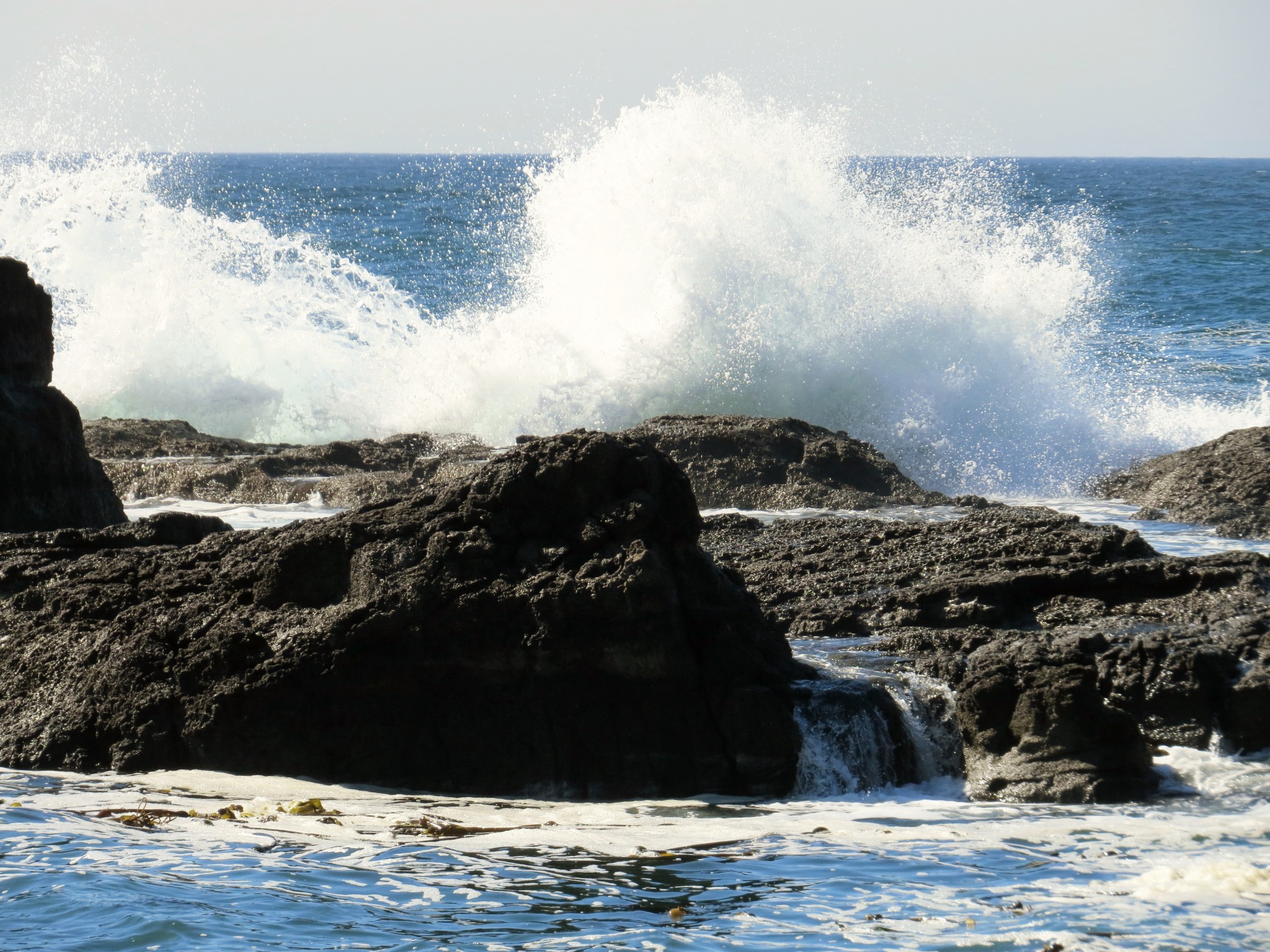 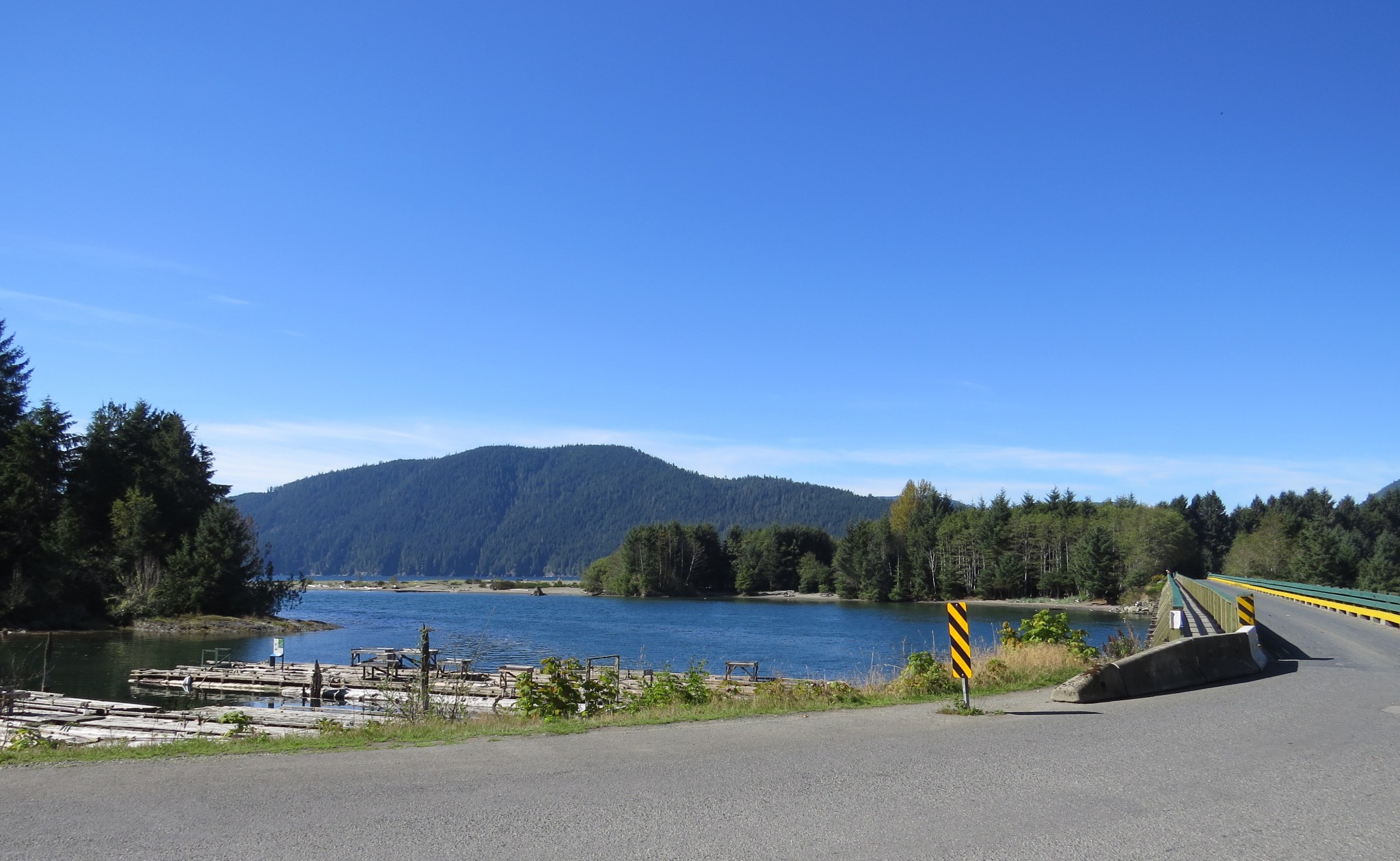 Heading back up island

The West Coast strongly reminds me of New Zealand in so many ways, especially the road north from Port Renfrew, heading inland. This looks like so many places on the South Island, complete with the long one lane bridge!

We completed a circular route on the way home, heading up to Cowichan Lake and then east, back to the main highway. I wish we’d have more time to see a bit of the Lake, but we’ll have to leave that for next year.

We did, however, stop for Indian food at a new restaurant in Ladysmith (near Nanaimo), and I’m pleased to say it was the best of its kind I have had in Canada since we arrived in late 2011!!

The only sting was returning to our car to realise we’d locked ourselves out. It took an hour and help from some kind people (including the restaurant’s owner offering the use of both a coat hanger and a tandoor stick) before we were back on the road to the Comox Valley. 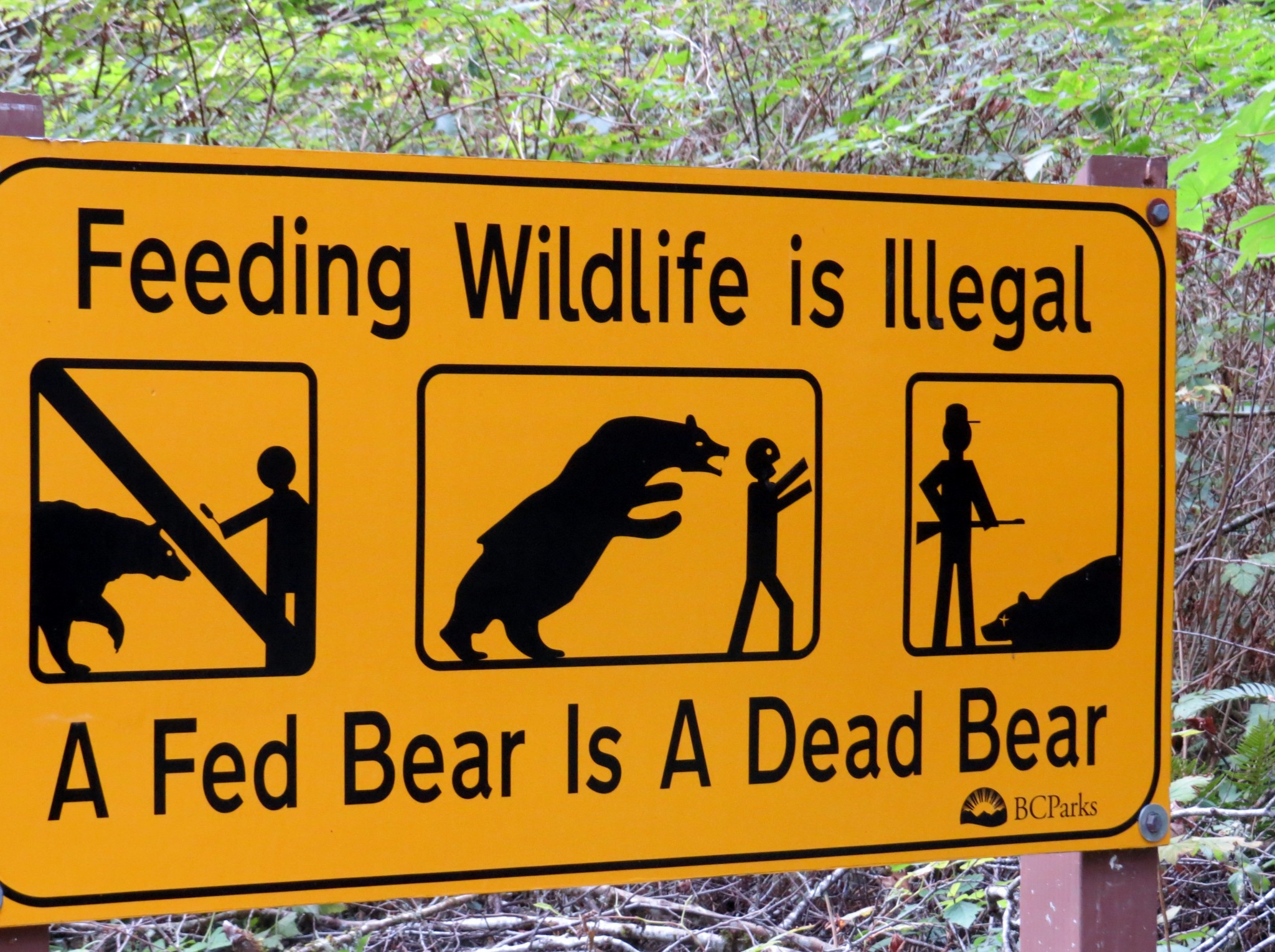 From this trip, I have learned to always make sure at least one of us has car keys (even in the rush for good Indian food), and not to feed bears sausages. By the look of this sign, they like them a lot and it doesn’t lead to good things.

Check out these other posts about Vancouver Island