One of the great things about being in Canada is that we’re no longer considered completely insane for wanting to sleep in a home converted camper-car/van. It’s actually a relatively common thing to do here, at least on Vancouver Island anyway!

A few of our friends have decided to travel Canada in converted vans and kindly agreed to let me feature their vans here.

First up, we have Joe’s 1996 Plymouth Grand Voyager. The vehicle is very similar in size to our Toyota Estima that we converted and used for our Europe road trip in 2011. The bed is in the same position as our first conversion, but here’s where the similarities end.

Joe created an amazingly clever platform bed design that allows the bed to fold up and convert into a chair and table. This is very much like beds we have seen in VW vans and is a very smart use of space. 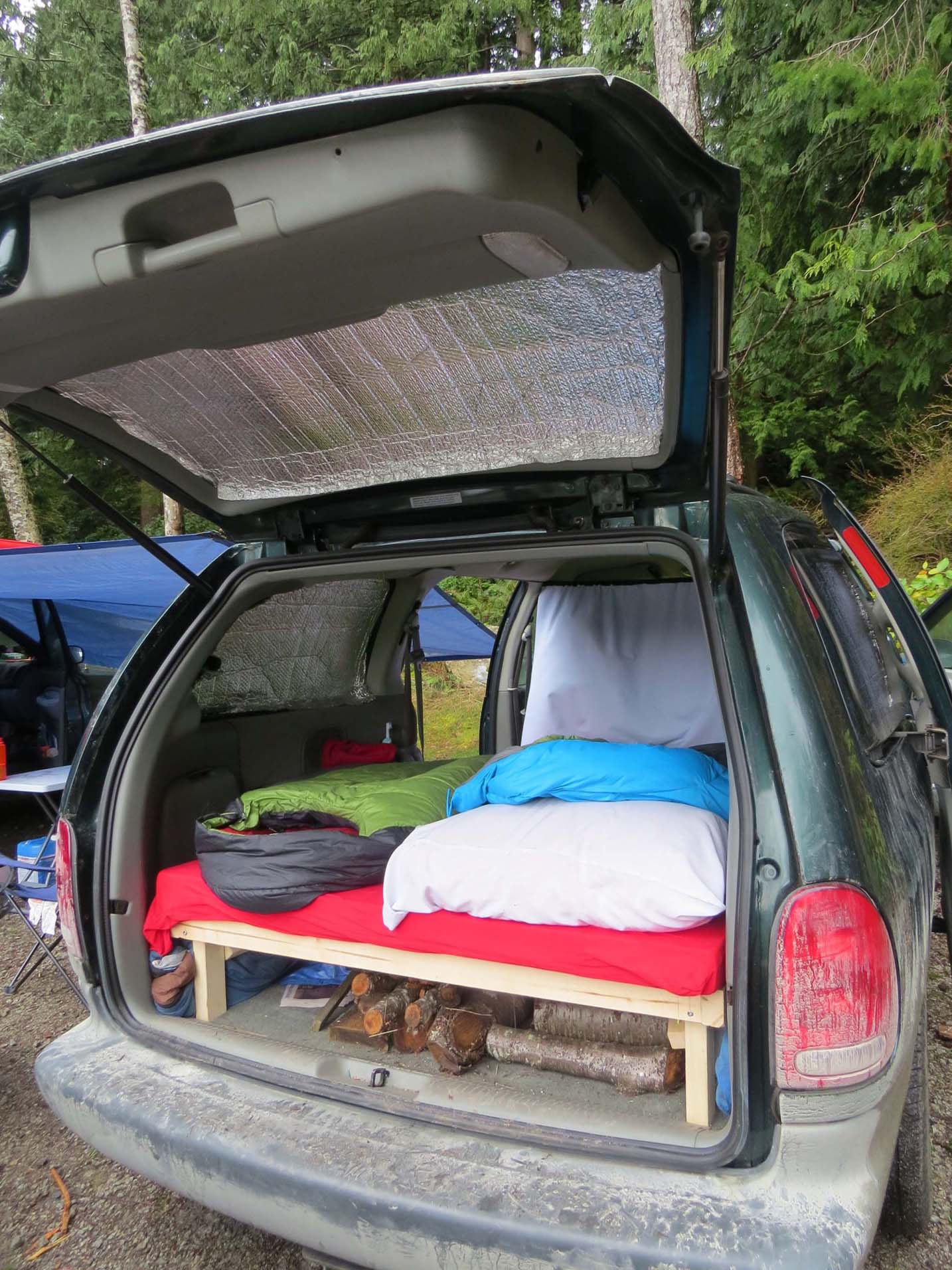 The platform bed is relatively low to allow good head room, and as Joe is travelling on his own for the most part, the storage space is a good size. This balance is tricky to get right, but I think he has it! 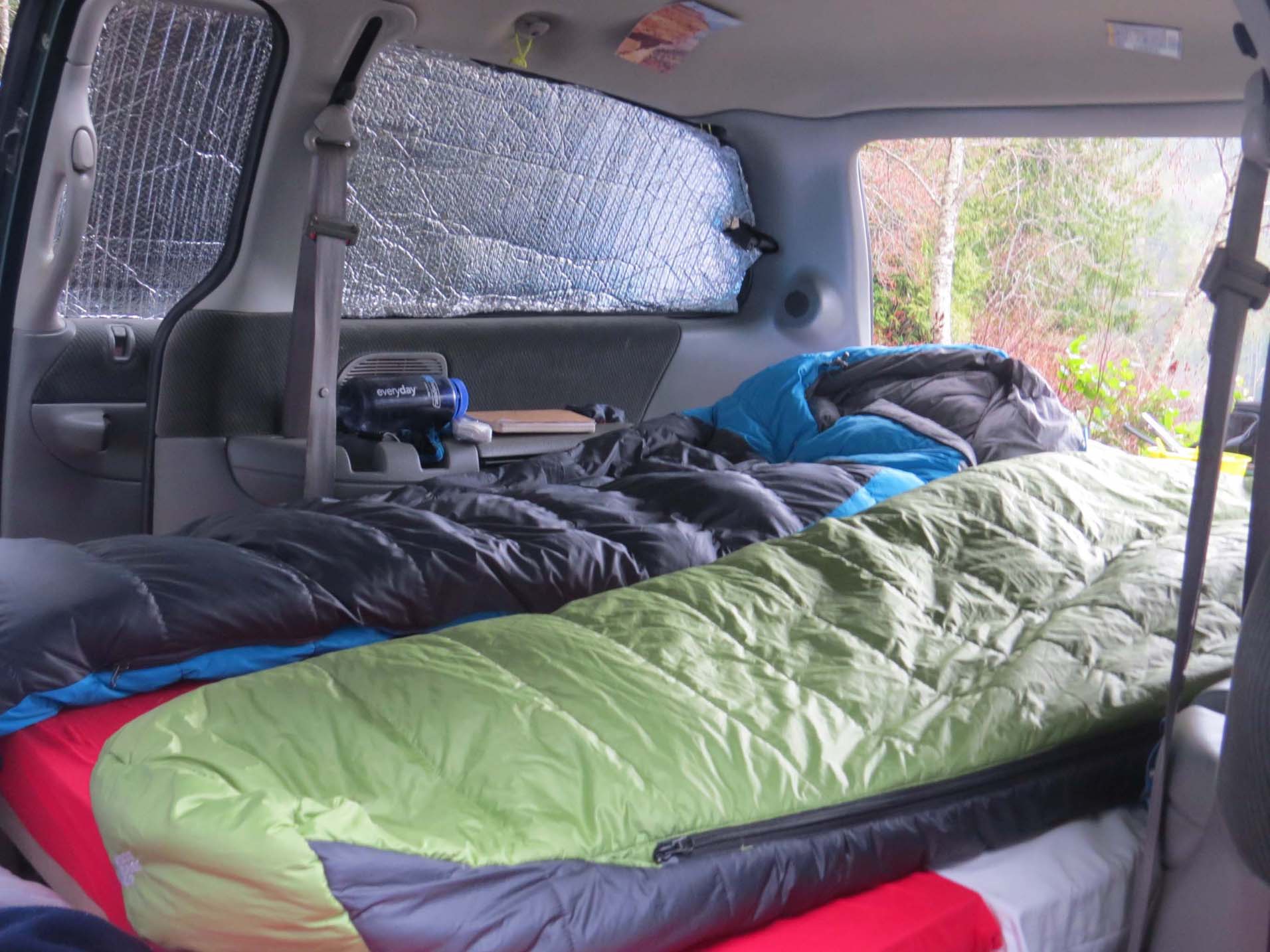 Inside, you can see that there is space for two sleeping bags to fit comfortably. The cup holders and in built storage on the side are great for all those little items that you use so often. Much better than having to store them away all the time! Another bonus of Joe’s van is that he has two sliding passenger doors – these would have been so useful on our Europe trip. 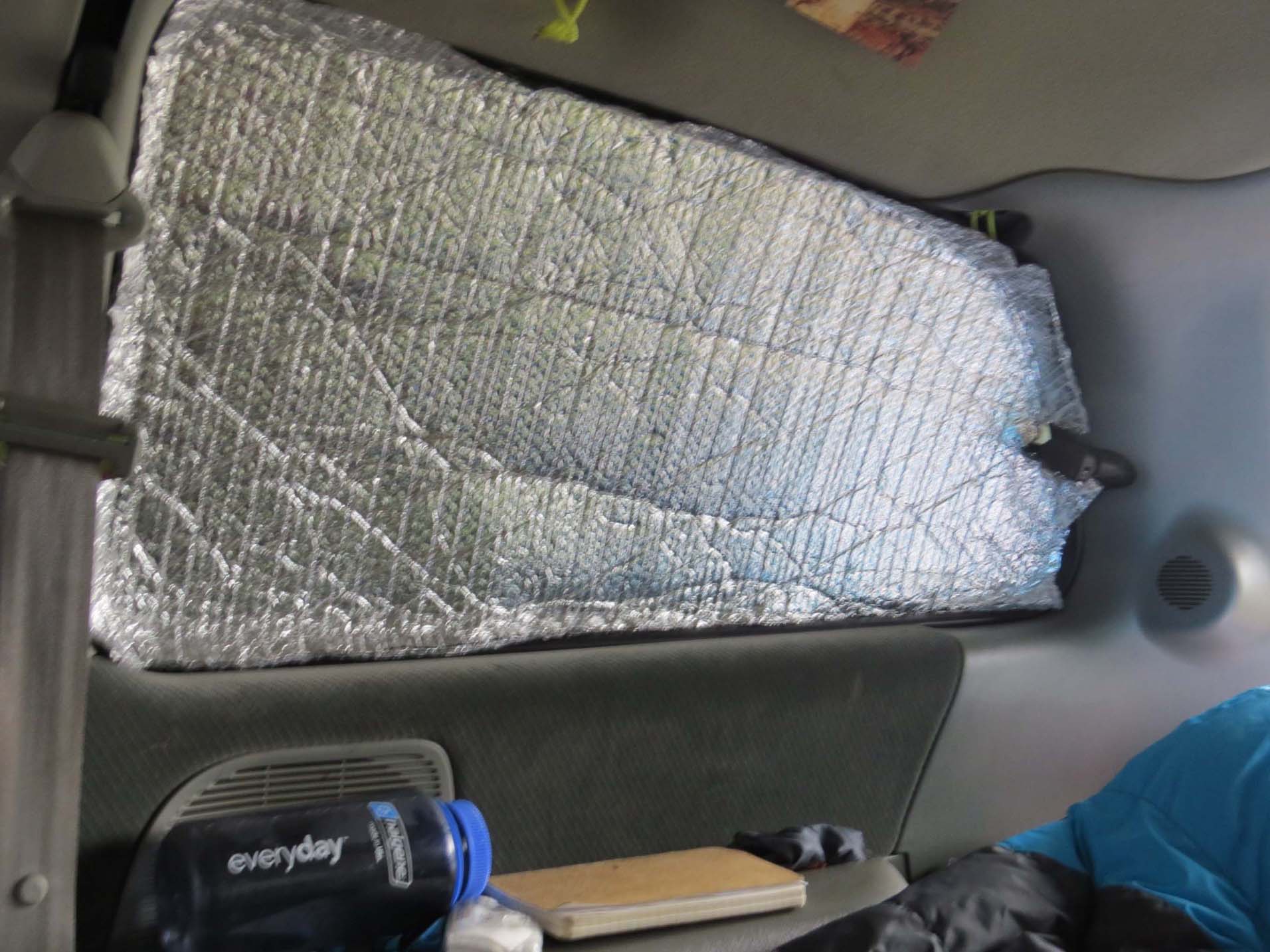 Inside of curtains, Joe is using foil-style insulation pressed into the window frame. This stuff is actually fantastic, as it blocks out light really well (both looking in and out) AND insulates the car at the same time. It also takes up less space than curtains and you don’t have the issue of installing curtain rails etc.

Joe actually passed on this tip to Sam and Lucy and now we actually have a large roll ready for installation in our van too! Of course, a curtain is still needed between the front seats and the beds.

As well as a well made and well thought out van, he also has the BEST foam mattress cover ever (below)! It was hand made by a friend’s mother and finishes off Joe’s cross Canada road trip van perfectly! 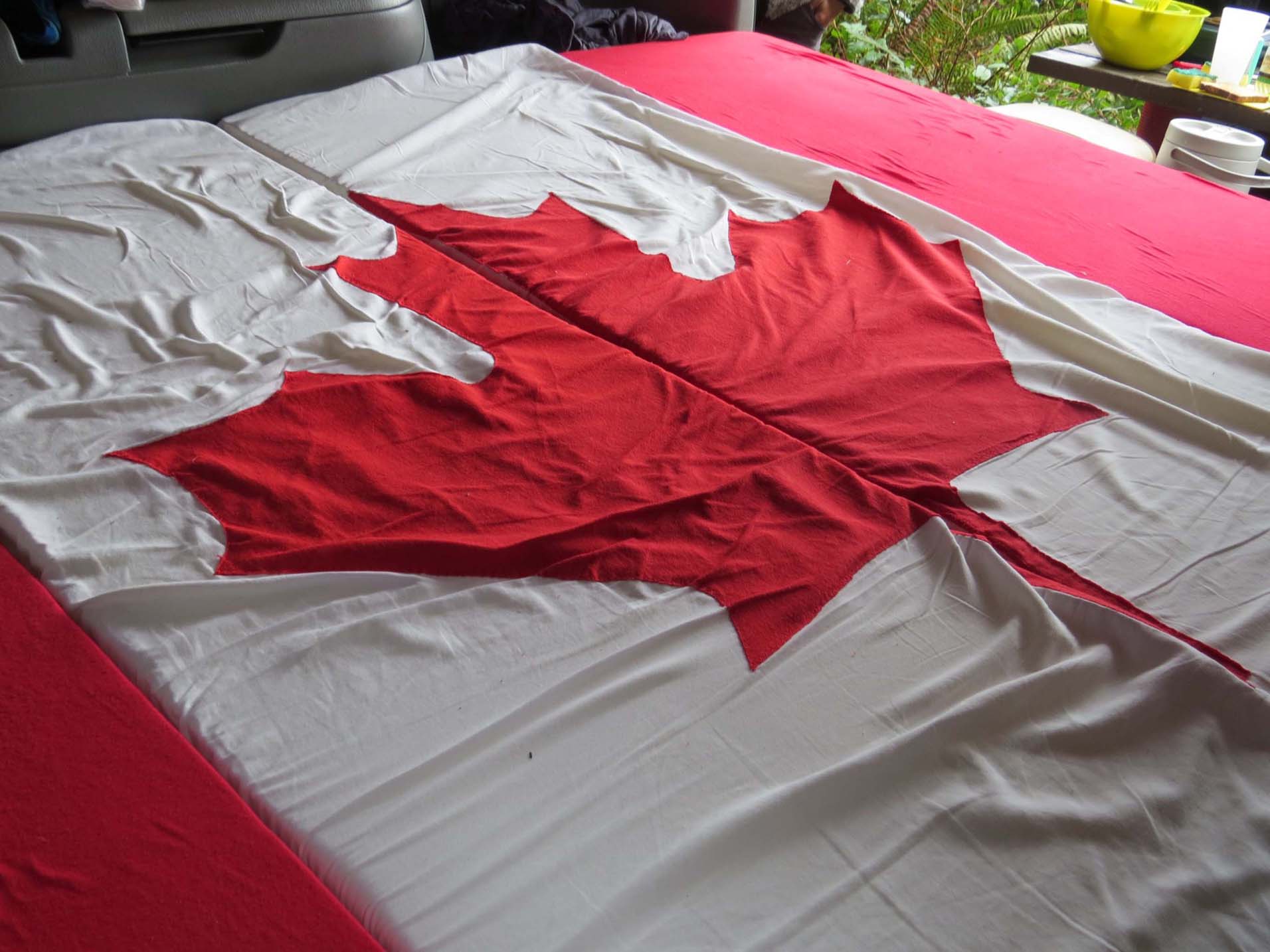 Lucy and Sam purchased their Mazda 4×4 for their British Columbia/Alberta road trip and have put in a platform bed for the length of the passenger section, but with space around the side to get in.

There’s super useful built-in table at the side of the bed for some inside surface space; it’s also a great size for a laptop. The bed is huge, and there are doors on both sides, allowing good access and space for a travelling couple.

As mentioned earlier, Sam and Lucy have used the same foil insulation as in Joe’s van. There are hooks on the ceiling, handy during the night; we need to replicate this in our own van. 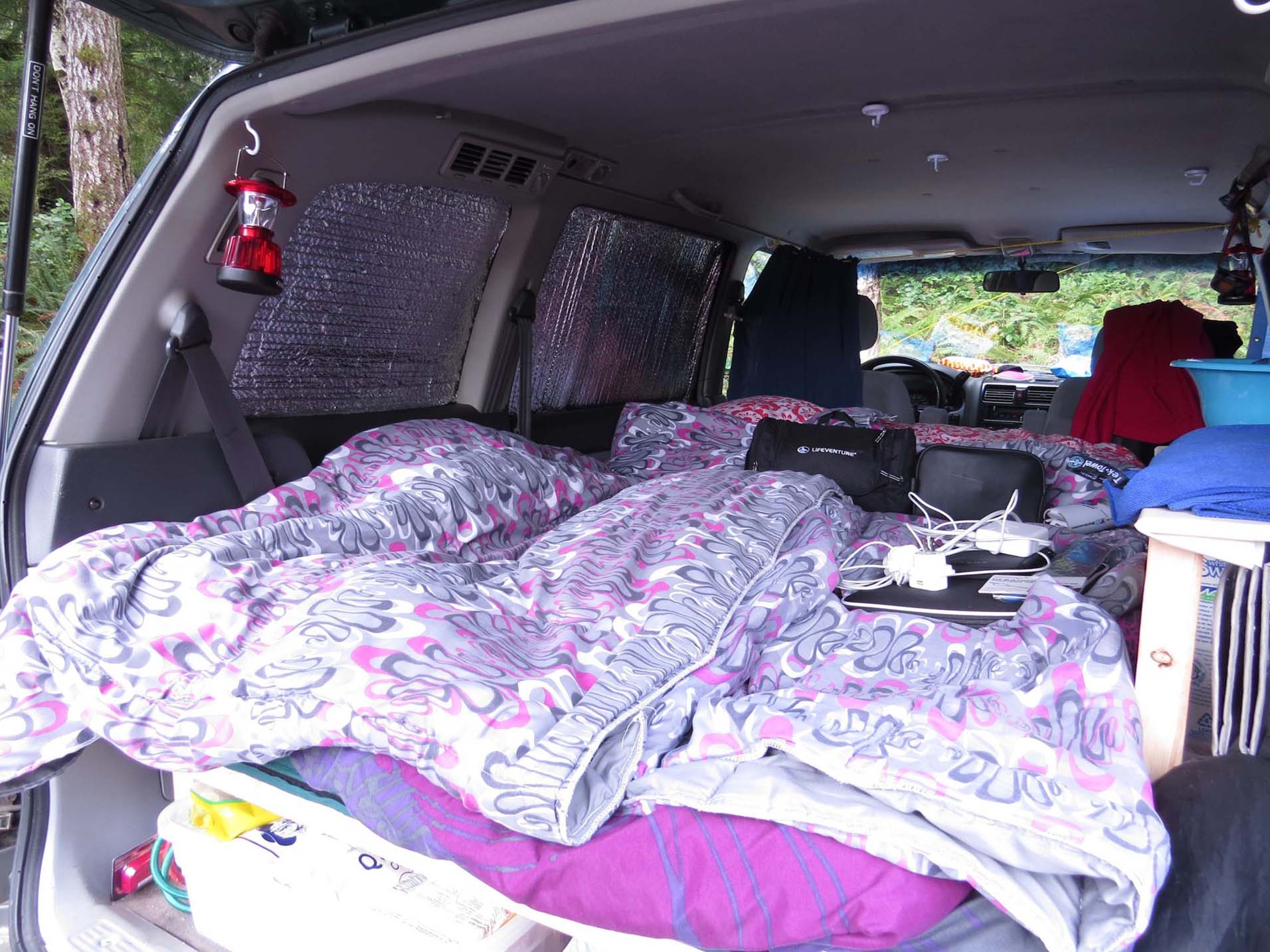 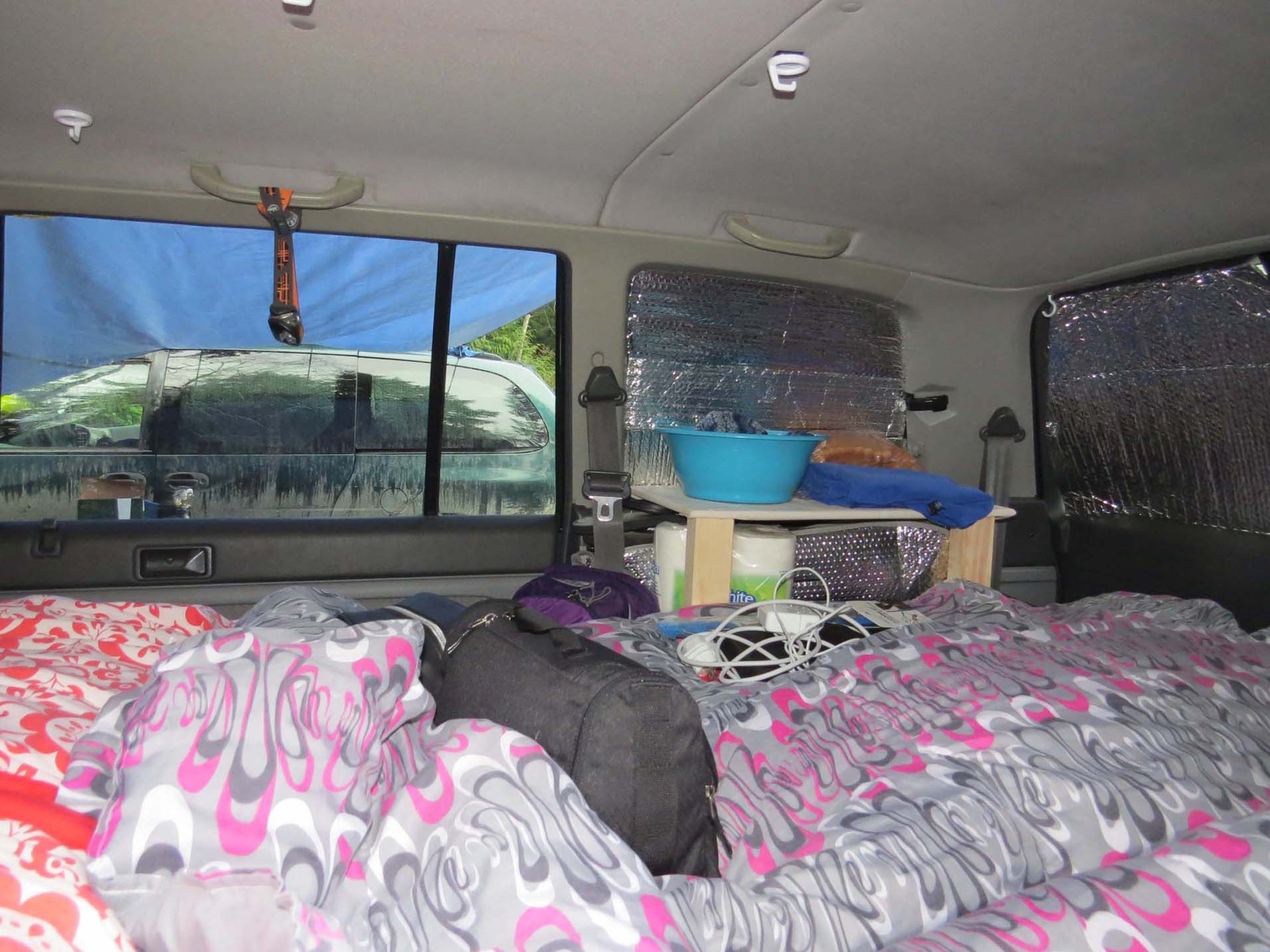 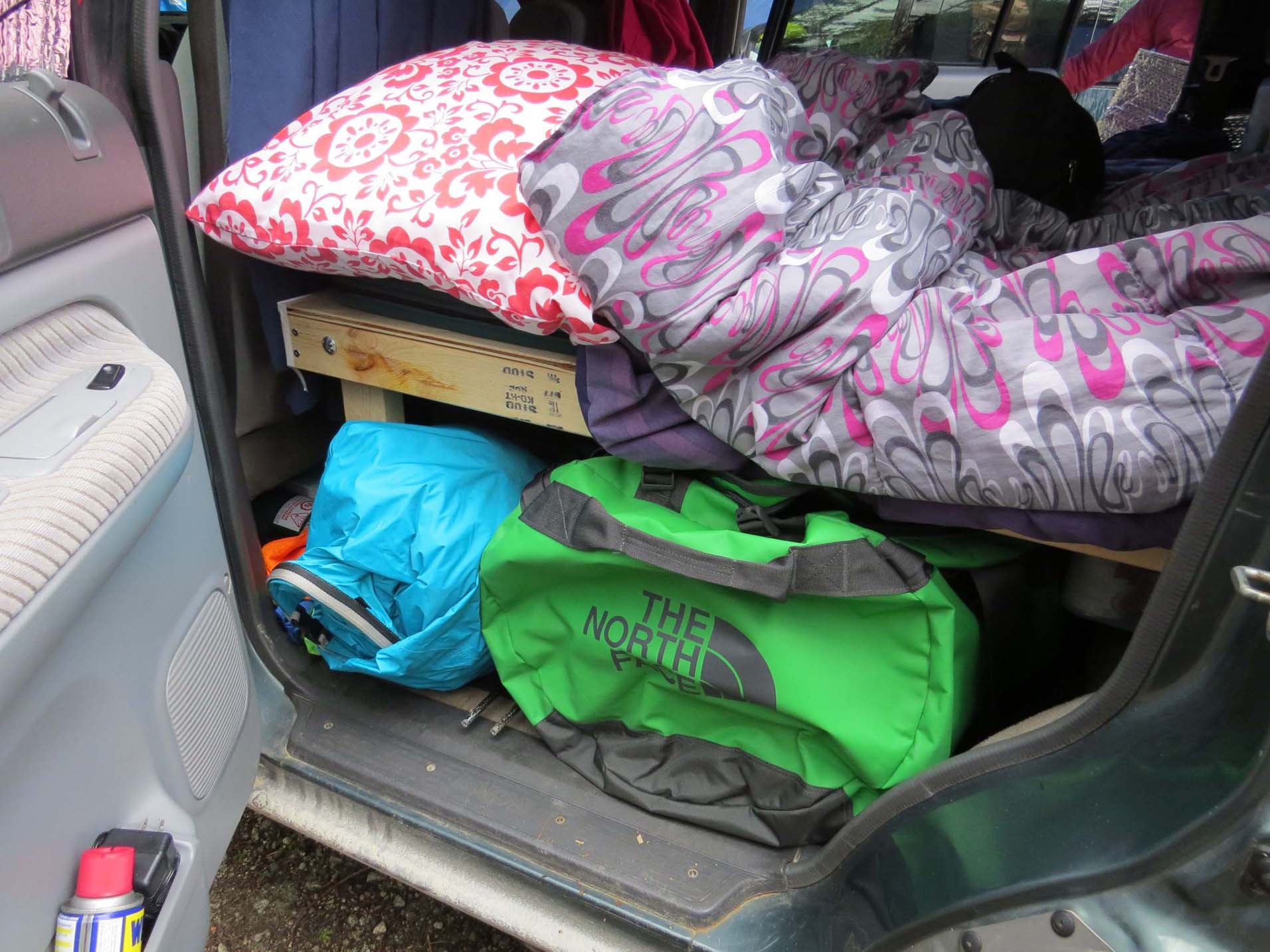 Behind the seat storage

As the Mazda is a 4×4 and not a 7/8 seater van like the Plymouth Grand Voyager or our own Chevrolet Astro thereis more storage space behind the front seats, where the leg room would be for the passengers. This gave Lucy and Sam more flexibility with the platform bed height, to create a better storage/space balance.

Check out these other posts about vanlife