The Dempster Highway is legendary in Canada. It’s a 735km dirt road to Inuvik in the Western Arctic, the furthest you can drive north in Canada.

The drive takes you over the Arctic Circle, to a land where the sun doesn’t set for weeks in midsummer, and then doesn’t rise at all in midwinter.

It was Jean Robert’s dream to drive it, and I think we did his dream justice, spending 11 days in total on the Dempster. We raced to the Arctic Circle in time for the summer solstice on 21

We raced to the Arctic Circle in time for the summer solstice on 21st June (also my 25th birthday) and then spent three days in Inuvik before heading back south. Strangely enough, it was actually the drive back I enjoyed the most. 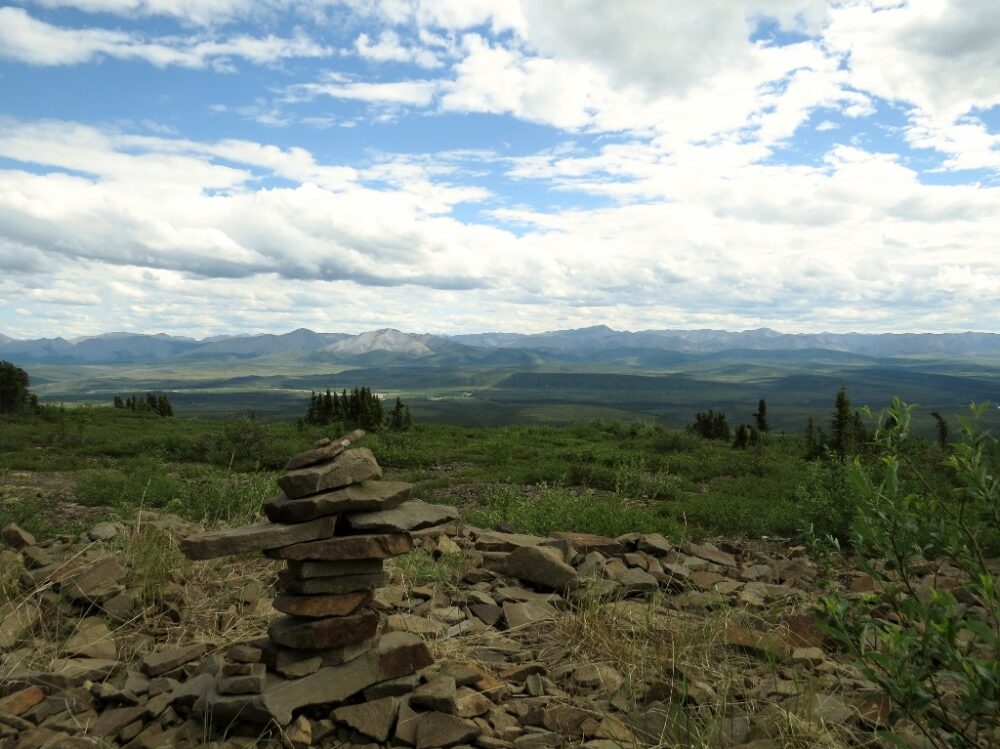 Built in the late seventies, the Dempster is feared as a tough road to travel. It follows the old dog sledding routes used by the North-West Mounted Police around the turn of the century (learned from the local First Nation communities) and is built on permafrost and tundra.

Drivers are advised to have two spare tires, an extra supply of gas and a well-maintained vehicle for the journey. We’re no strangers to rough roads and remote locales. Our home of the last few years, Vancouver Island, is full of logging roads of varying condition, so the well-maintained track of the Dempster was actually a nice surprise.

Tombstone Territorial Park, famous for rugged hills and jagged peaks, is only an hour or so in, and we were spotting white capped mountains long before we got there.

We arrived at the Interpretive Centre to find Labrador tea brewing on the woodstove and bannock being cooked and served with local wild rhubarb jam. I can only guess they had heard I was coming.

Driving to the Arctic Circle

The rest of Tombstone would have to wait until we came back; it was the 19th June and we were on a mission to get to the Arctic Circle within the following 24 hours. Luckily, we had the sun on our side; the further north we drove, the longer we would have light.

We stopped driving at around 11pm, but not before spotting mountain goats and encountering a porcupine and grizzly bear. Well, not together, that would be a bit peculiar. The grizzly was very large and very fast. I was glad to be in the van. 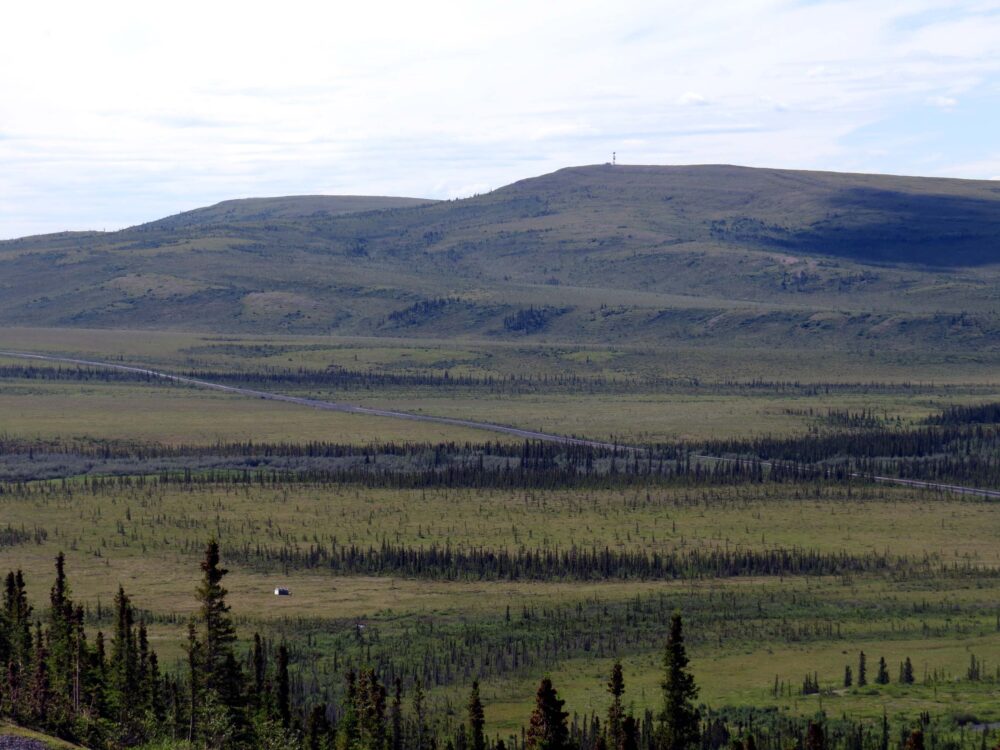 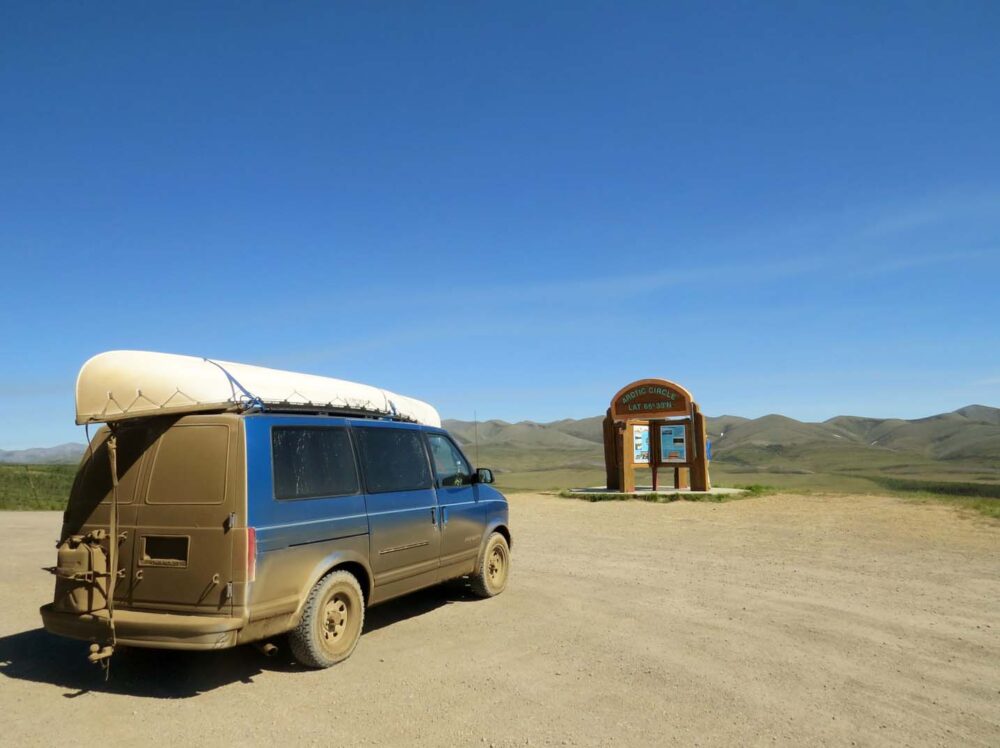 More local wildlife made an appearance later when we did need to leave the van. A swarm of mosquitoes rudely invited themselves to dinner. We had been warned about this and had mosquito nets ready but jeez, I didn’t think they’d even dive in the food.

Jean Robert was even bothered, and he’s from New Brunswick. We retreated to the van and fell asleep under our makeshift bed-net, to the anything-but-calming-hum of the bugs.

The mosquitoes were nowhere to be seen when we crossed the Arctic Circle the next day, probably due to the insanely high winds that made even walking difficult.

There aren’t really any trees in this area to act as a windbreak; there’s not really much of anything, besides rolling hills and the Dempster heading off into the distance. Whatever it is, it’s remarkedly beautiful, made even more so by the lack of people to share it with.

The clouds came in on the evening of the 20th, and didn’t leave until the 22nd. It was the first rainy day we’d had in weeks, quite a bit of bad luck for the summer solstice we had rushed to experience above the Arctic Circle.

No matter, we spent much of the day hiding from the mosquitoes (rain seems to perk them up), either in the van or the campground’s bug-proof shelter.

The latter did, however, have a most excellent wood stove, perfect for birthday/solstice pizza. What we didn’t realise was that we would soon be wishing for more days just like the 21st.

I’ve written more about the downsides of the Midnight Sun elsewhere, but I’ll leave you with this for now; 29 degrees, 24 hours a day, plus heat resistant bugs. It was a bit unexpected for the Western Arctic. 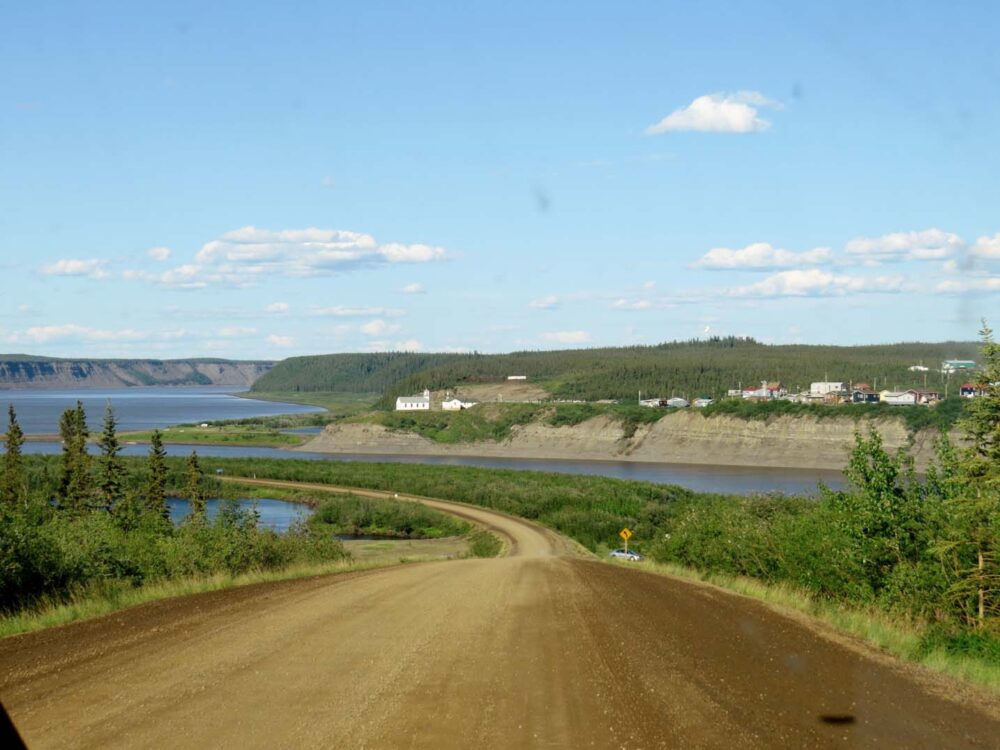 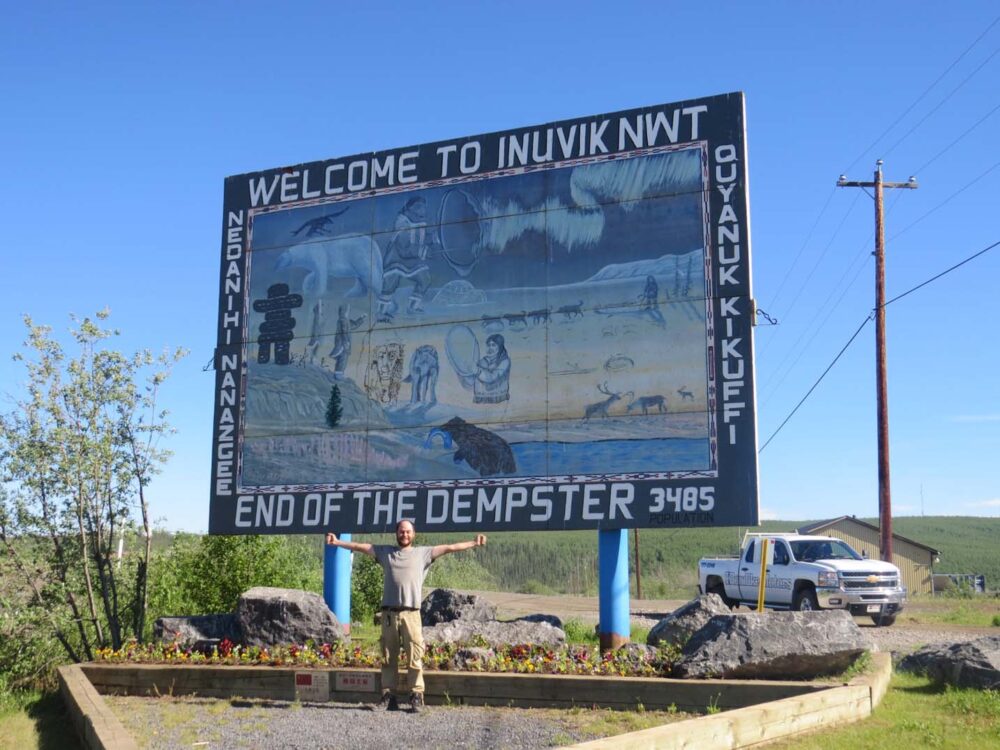 Something else unexpected was the flat tire we received just north of Fort McPherson, one of the few settlements on the Dempster. This was the same day the van started to rev up and down and intermittently stalling when driving below 50km/h. Losing a tire and the van making funny noises on the same day? Not good.

Losing a tire and the van making funny noises on the same day on the Dempster Highway, with mechanical services a long, long way away? Really not good. To keep going or go back? Well, it was 50km less to keep going…. We did have a spare tire, but it was also a bit flat.

Problem solved with the help of some passing Albertans, we drove again (over 50km/h) until midnight, arriving in Inuvik early the next morning. It is one of the most interesting places I have ever been – blog post coming soon.

The Mackenzie River runs alongside Inuvik, and we intended to start a 4-7 day paddle here to Tuktoyaktuk, the town further north next to the Arctic Ocean.

Needless to say, our plans changed when we discovered it would cost $1000 to ship ourselves and the canoe back to Inuvik afterwards, and we ended up enjoying this area for reasons we didn’t anticipate.

The locals are exceptionally friendly for one thing, not just in Inuvik, but along the whole Dempster Highway. Turns out, they don’t particularly like the heat and bugs either, preferring the other seasons for the prolific hunting, fishing and sporting activities on offer (SO MANY skidoos! And dog harnesses in the supermarket!) 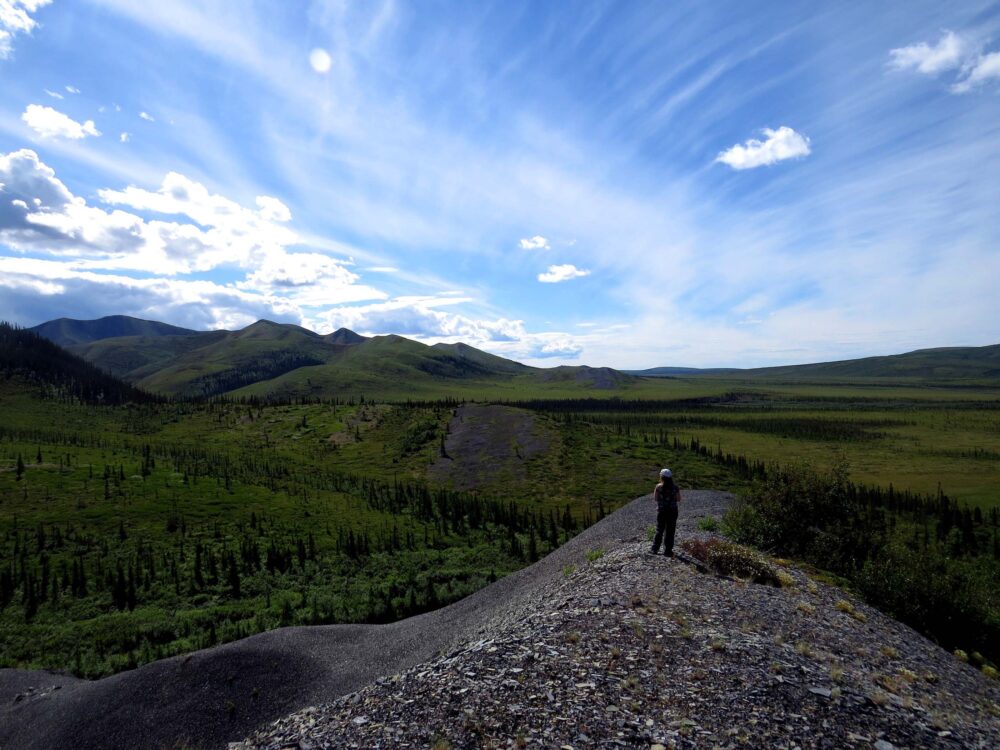 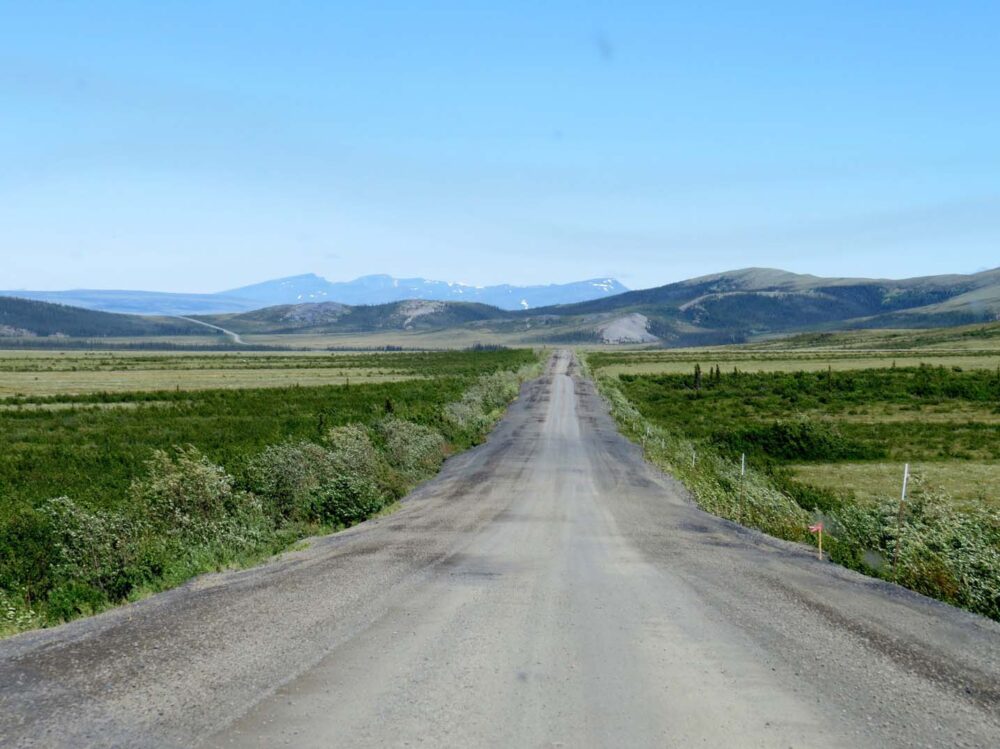 Driving south on the Dempster Highway

Leaving Inuvik, we were actually excited to get below the Arctic Circle again to have some form of night. A bit of a surprise after all that rushing to get so far north!

Driving south again, we took our time, enjoying the wilderness we had travelled this far to see. There were so many places to park off the road, and we hiked on the tundra and up the piles of slate to get a better view of the endless rolling hills mountains in the distance.

There were wild flowers too, as well as Labrador plants to make our own local tea with. Also local was Jean Robert’s smoked whitefish from a Gwich’in smokehouse camp by the river, and the bannock an Elder kindly offered us at the information centre when we told him we hadn’t been able to find any to buy.

There were wild flowers too, as well as Labrador plants to make our own local tea with. Also local was Jean Robert’s smoked whitefish from a Gwich’in smokehouse camp by the river, and the bannock an Elder kindly offered us at the information centre when we told him we hadn’t been able to find any to buy.

Fishing on the Dempster

Jean Robert caught a big Dolly Varden on our last Dempster day. You may notice he looks pretty wet. He jumped into the river after I accidentally pushed our spare tire out of the car (keeping it close for convenience) and it rolled off the nearby bluff, straight into the river.

He had to swim in neck-deep water to reach it. Looking back, it was quite hilarious. I did bring him dry clothes to change into, but he was determined to catch this big fish that he had spotted. Sure enough, he got it about ten minutes later.

You also may notice that JR looks dirty too. The fish jumped in the mud and splashed him. (Sorry fish). 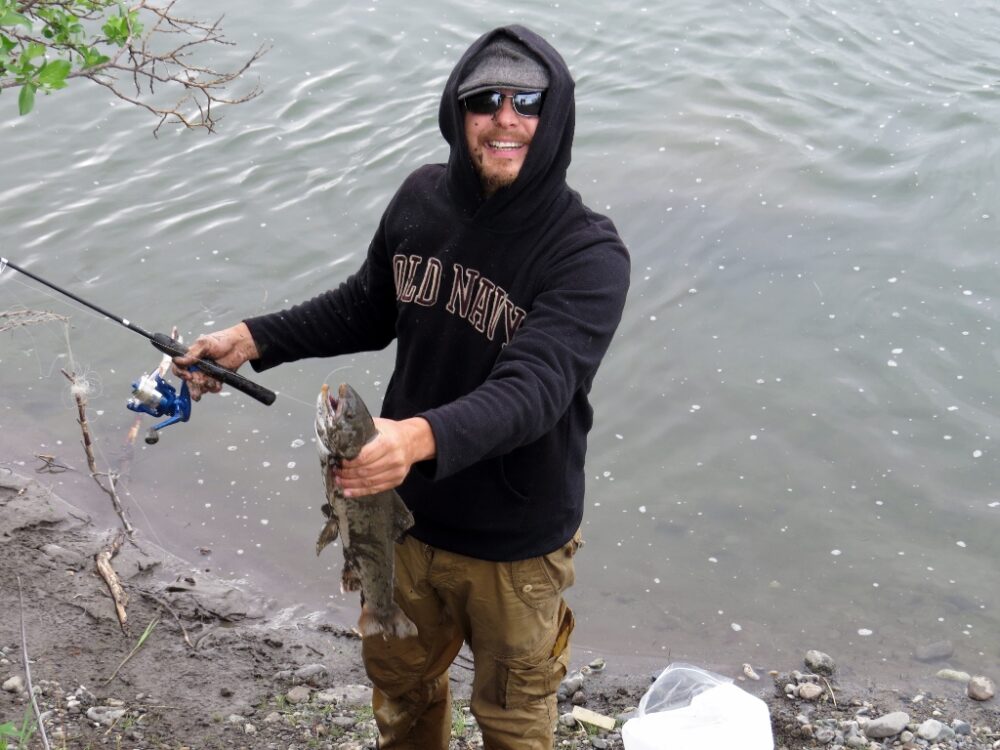 The last, and best, day

The best night on the road was the last. We parked overlooking an icy river and what looked like a volcano and cooked the grayling we had caught earlier on the Blackstone River. At 1am, everything burned red from the sun; finally, a sunset!

A beautiful end to an incredible ten days in the Arctic…..we ended up staying most of the next day too. We will be back again soon; Tombstone Territorial Park is still waiting (photo above). 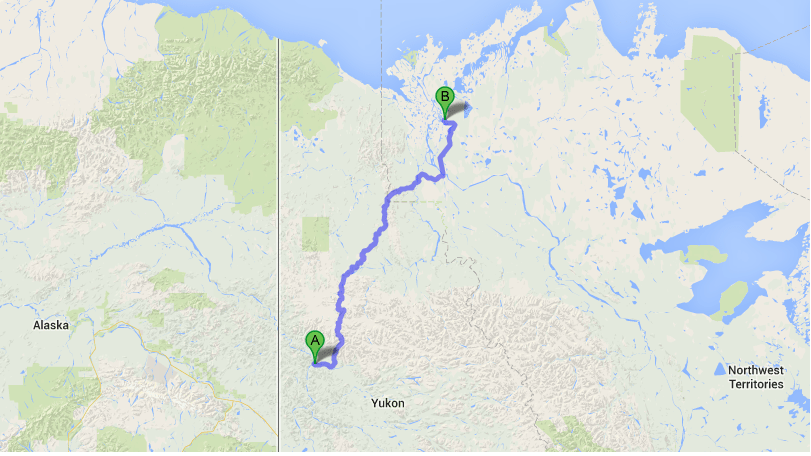 $350 including food and paid camping in Inuvik plus one new tire at $200. Gas is VERY expensive in this area, being 1.89 in Inuvik

The map shows Dawson City to Inuvik (still having connection problems for my own custom map) but we did head to Dawson after, so it works! 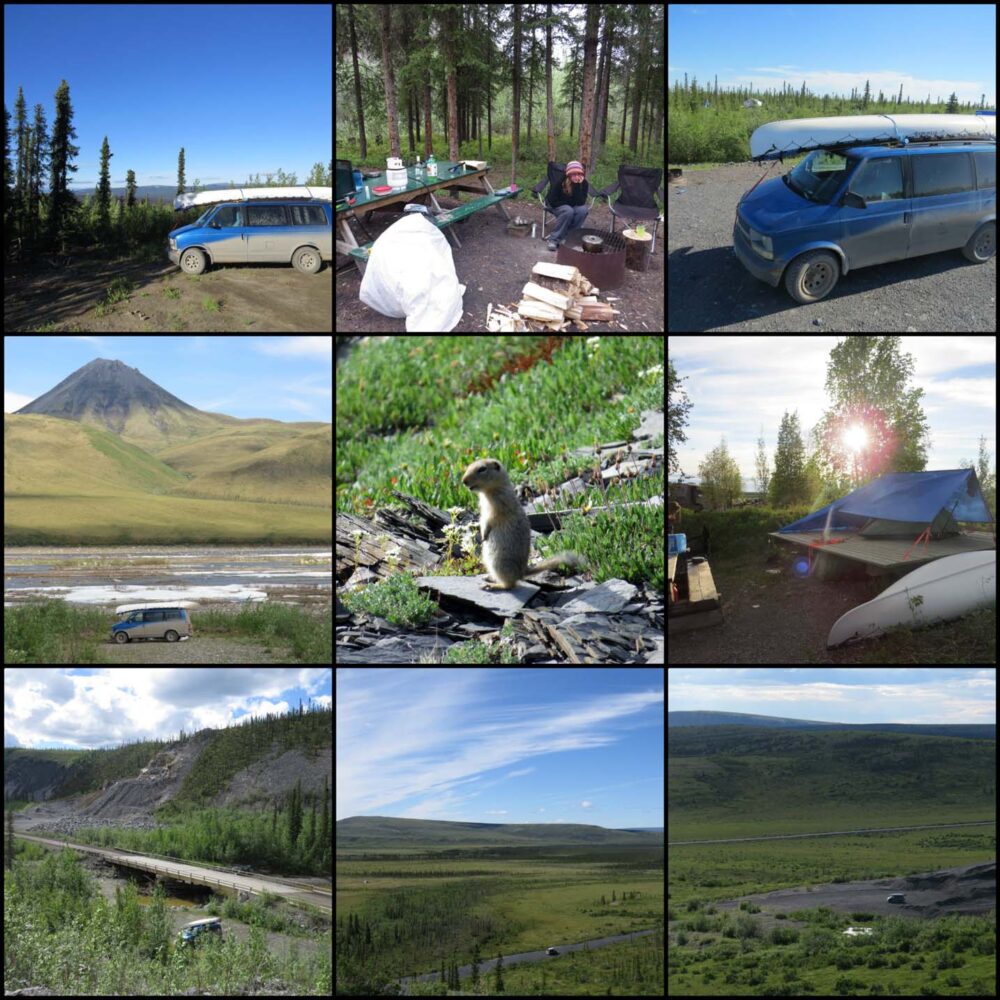