How to Get Around New Zealand

One the of the main reasons why I consider New Zealand to be such a great destination for so many types of travellers is the many transportation options. The choice of ways to travel is varied enough to provide something for gap year backpackers and independent travellers alike.

Whether if you’ve got six months or just two weeks to explore this beautiful country it’s easy to find a way off the beaten track, no matter if you’re a first-time backpacker or long-term traveller.

Even better, you don’t have to necessarily decide and book before you arrive into New Zealand – unless you’re arriving during a holiday period (December/January, Easter) or sporting event (such as a recent Rugby championship…) there is little need.

Check out my guide to travelling around New Zealand, listed from the most independent options to the more organised.

Good for: Seeing lesser known sights, staying in out-of-the-way hostels/campgrounds, stopping where and when you want, being able to arrive at a population attraction outside of peak time (usually 10am-2pm)

NOTE – If you’re wondering where you can park a campervan or sleep overnight in a car then please refer to the Department of Conservation’s ‘Camping Our Way’ website.

Freedom camping, or wild-camping, used to be pretty common in NZ, but it started to cause a few problems when some travellers started to be a bit less discreet about it. The Freedom Camping Act was issued was 2011, meaning that there is an instant fine (generally $200) for illegal camping.

The main issue is with vehicles that are not self-sufficient i.e. have toilet facilities, such as the Wicked and Spaceship brands that I mention later. Have a read of the Camping Our Way guidelines and practice responsible wild camping.

Hiring a car or campervan

Great for: short trips to New Zealand – with your own transport you’ll be able to fit as much or as little travelling in as you want and see exactly the sights you came all this way to see. The hiring rules in NZ are pretty awesome in that the minimum age for some companies is 18, meaning even those straight out of school/college can hire a vehicle.

One big catch though; the hirer (main driver) usually needs to have a credit card. Another issue is that young drivers (generally under 25) may have to pay more per day than an older driver, and also will have a higher excess reduction cost.

This is another cost you have to pay per day that takes the excess down (i.e. the amount you’d have to pay before the insurance company would) if you damage the car. Keep in mind that there are a few roads (like 90 Mile Beach in Northland) that most car rental company do not allow you to drive on.

Ace is my recommended rental car company – I hired with them a number of times for as little as $11/day.

Jucy, Spaceship and Escape all offer great campervan rentals in a variety of locations around New Zealand.

Buying a car or campervan

Seriously consider this option if you’re visiting New Zealand for three months or more. The second hand car market in NZ is strong, making it easy to buy and sell a cheap car (less than $1000) quickly and easily. Car insurance is not mandatory, though if you choose to buy it the prices are pretty reasonable.

Check out my guide to buying and selling a vehicle in New Zealand. My absolute favourite thing I did in New Zealand was buying my car; the freedom it gave me to visit every corner of the country was incomparable.

If you just need to get from your local city or town to another for work purposes or to visit a friend, then are a number of bus and shuttle companies that can help you for a really reasonable cost (for as low as $1 a journey!).

If you’re WWOOFing your way around New Zealand then this transport will especially work well for you. Yes, you could travel New Zealand at leisure using these too, but you’d be getting a bit of a limited experience. I say this from experience!

I initially planned to use the national buses at first, but then the limited timetables (sometimes only every day or every other or just in one direction!) slowly drove me mad. I was having to plan my trip around where the buses actually went and when…not really the experience I had in mind!

Intercity is the national bus service, while there are small companies offering regional services.

The train network in New Zealand isn’t extensive but there are three main routes of appeal to visitors, mostly for the surrounding scenery rather than convenience.

The TranzAlpine is known as one of the best rail journeys in the world – it travels between Christchurch and Greymouth on the South Island’s Wild West Coast in four and a half hours.

Tickets for the TranzAlpine, CoastalPacific and Overlander are available from Great Journeys of NZ.

Read next: 5 Lesser Known Places in New Zealand You Must Visit

I spotted a comment in my Lonely Planet referring to the post service on the East Cape (the area between Gisborne and Opotiki on the East coast of the North Island) offering travellers fixed priced non-stop shuttles. I organised this with the I-Site (visitor information centre) in Gisborne.

I took a five hour trip with the local postman from Gisborne to Hick’s Bay (at the top of the Cape) for $60, leaving at 10am. We stopped many times en-route, and delivered some ‘special’ items….such as a cold Burger King meal from Gisborne, purchased some four hours ago.

A few days later I then took another post bus from Hick’s Bay (I was picked up at my hostel at 6am) all the way to Whakatane in the West, again for $60.

This one was a little shorter, but it took still much longer than a normal car would have done since we stopped everywhere – my driver basically knew everyone on the Cape! It was definitely an interesting experience, especially in such a less-touristed area such as the Cape. Ask at a local I-Site to see if a post bus transport is available.

Ah, the ubiquitous hop-on/off buses. A perfect match for those wanting company and lack of organization stress but not to be on a tour bus. The ‘big three’ of these types of bus offer beaten track routes on both islands, with many different bus options.

The bus pass price only includes the bus transportation and sightseeing stops – no accommodation or attraction/activity costs are included.

Some of the passes offer special experiences that you might not otherwise be able to have – the Kiwi Experience’s East As pass gives the opportunities to meet some local Maori families and have a full tour of the local Marae (religious meeting house complex).

The idea is to buy a pass and then use the bus as a means of transportation (that does stop at attractions and for activities on the way) and to meet other travellers.

The driver acts as a quasi-tour guide and can book hostel accommodation and activities ahead of time. The bus company will ‘recommend’ one hostel that usually has some sort of sponsorship deal with; often they are the large chain hostels such as Base.

If you find a stop you like, you can stay there and book onto a different bus to get to your next destination. The typical traveller on these buses is under 35 and looking to supplement their travelling with some late nights along the way.

Of course, there is always a variety of types of people and ages on each bus, so if you don’t click with the one you’re on, you can always get off and book onto the next one.

The main hop-on hop-off providers are Stray and Kiwi Experience. The latter has a more party-hard reputation than the other, but aside from that, they are pretty similar.

I’m not going to write too much about tours as I’m sure the benefits and disadvantages are pretty obvious; you’re either a tour person or not. There is a huge variety of tours in New Zealand; from luxury wine and food trips to back-to-basics camping and trekking/tramping excursions.

At first glance, the prices might seem very expensive but don’t forget that most the time this cost includes accommodation and some meals.

Check out these other New Zealand posts 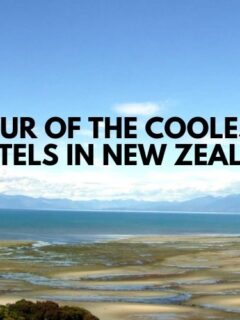 Next
Four of the Coolest Hostels in New Zealand
Click here to cancel reply.