This post includes affiliate links. If you make a qualifying purchase through one of these links, I may receive a small percentage at no extra cost to you.

Go back in time at Barkerville

British Columbia is home to many excellent museums, but the most interactive of these has to be the most excellent historic town of Barkerville near Wells.

At Barkerville, visitors can spend a day as a Cariboo Gold Rush miner. Immersive activities include a trip to church, gold panning, calligraphy lessons, theatre productions and drinks in the local saloon.

Resident actors bring the town to life with tours of the town, waterwheel demonstrations, trials in the courthouse, miner shareholder meetings and more. It’s a time warp back to the late 19th century.

Read next: Barkerville – A Time Warp in Northern BC

Learn to surf in Tofino

Hawaii, Australia and New Zealand all rank as some of the world’s top places to surf. But did you know that the tiny town of Tofino, British Columbia, is also often listed right next to them?

OK, so the water is usually a little chillier here than other surfing spots, but the breaks are good, the vibe laid back and the backdrop just so darn picturesque.

With over 35 kilometres of golden beaches and ancient rainforest looming right behind them, Vancouver Island’s west coast is a memorable place to learn to surf.

Snorkel with the salmon in Campbell River

Seeing the spectacle of bright red salmon swimming and jumping upstream during spawning time is an essential late summer BC experience.

If you want a more immersive experience, however, look no further than Campbell River on Vancouver Island. Here, you can actually swim fin-to-fin with the sea of salmon.

Several companies in town offer this unusual perspective on the annual salmon run. Of course, you can also bring your own snorkel too but be sure to read this advice from Beaver Aquatics first to avoid disturbing the fish. This definitely must be one of the most unusual things to do in British Columbia. 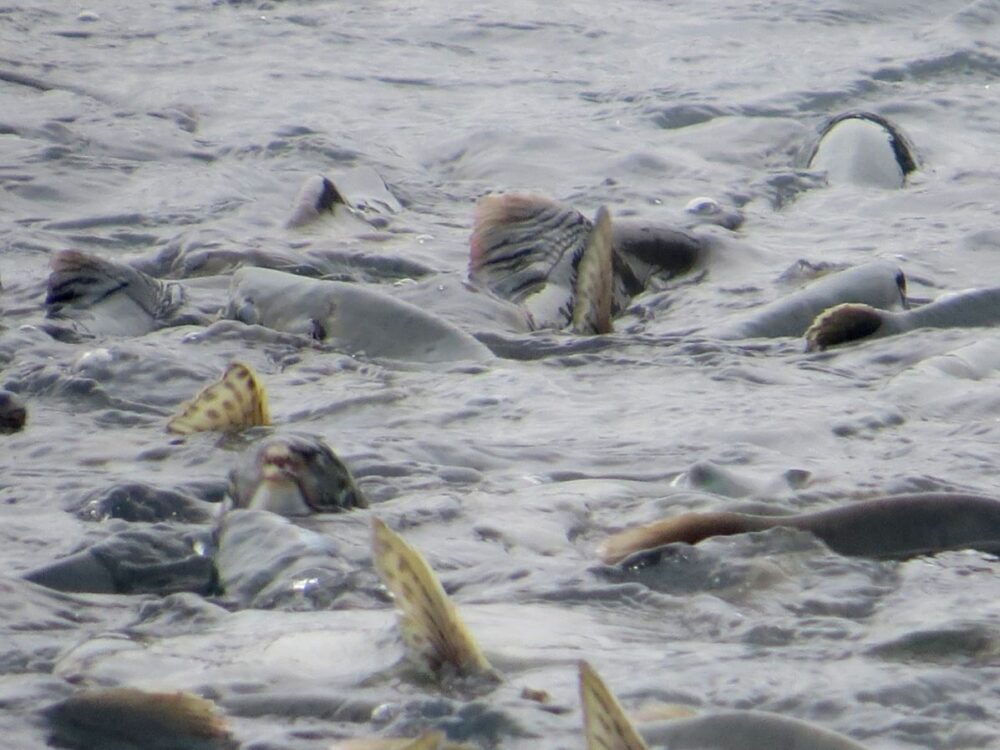 Explore a desert in Osoyoos

Trees are few and far between. One of the native residents is the Northern Pacific Rattlesnake.

And encompassing it all is a very, very dry climate. At the southern edge (near Osoyoos), there is even an area commonly referred to as a desert. This is the Canada you never imagined!

The highest concentration of caves in the world is found on British Columbia’s Vancouver Island. Just under 5% of the surface area here is actually comprised of so-called “karst,” a type of landscape formed by rock erosion (think sinkholes, caves and underground streams).

For this reason, the Island is a spelunker’s dream. Day-long guided tours leave from Horne Lake while independent explorers should check out Little Huson and Upana Caves a little further north. Be sure to bring a helmet and headlamp for the latter.

Canadian wine may not be world renowned (yet) but there’s probably a lot more wine produced here than you would think. British Columbia, in particular, is home to one of the top wine producing regions in Canada – the Okanagan Valley.

Overlooking rolling mountains and deep lakes, the wineries here must offer some of the prettiest vineyard views in the world. Wine tasting has to be one of my favourite things to do in all of British Columbia. There are plenty of wine tasting tours available or you can easily wine tour independently.

Read next: A Wine Lover’s Guide to the Naramata Bench, Okanagan Valley

Now this one is a bit of a head-scratcher. The Alaska Highway is a magnificent 2,2000km journey through the great northern wilderness. Think rugged mountains, azure lakes, raging rivers and limestone gorges. Here’s the clincher – over 1000km of it hat is actually in British Columbia.

While Yukon and Alaska are amazing in their own way (and I’d highly recommend visiting), this just goes to show that you don’t have to go all the way north to experience this epic road trip.

Read next: A Guide to Driving the Magnificent Alaska Highway

Hike on a volcano

It may surprise you to discover that some of those mountains that BC is so famous for are actually volcanoes! A chain of volcanic peaks runs from southwestern British Columbia to northern California, part of the Pacific Ring of Fire. Keep in mind, however, there hasn’t been an eruption or serious volcanic activity for hundreds of years.

Beautiful in their slumber, many popular hikes summit these dormant giants or travel through inactive volcanic fields. The distinctive Black Tusk in Garibaldi Provincial Park (near Vancouver) for example, is an extinct stratovolcano.

Go diving on the BC coast

In a similar manner to British Columbia’s surfing, the diving here is world class…as long as you prepare appropriately for the cooler temperatures. The famed diver Jacques Costeau apparently named diving in British Columbia second only to the Red Sea for clarity and marine diversity.

With forests of giant sponges, delicate coral, tiny nudibranchs, vibrant sea stars and giant Pacific Octopus, BC’s underwater landscape teems with life and colour. Non-divers can also check out the Vancouver Aquarium for a taster of the experience.

Did any of these BC activities surprise you? What would be at the top of your things to do in British Columbia list? 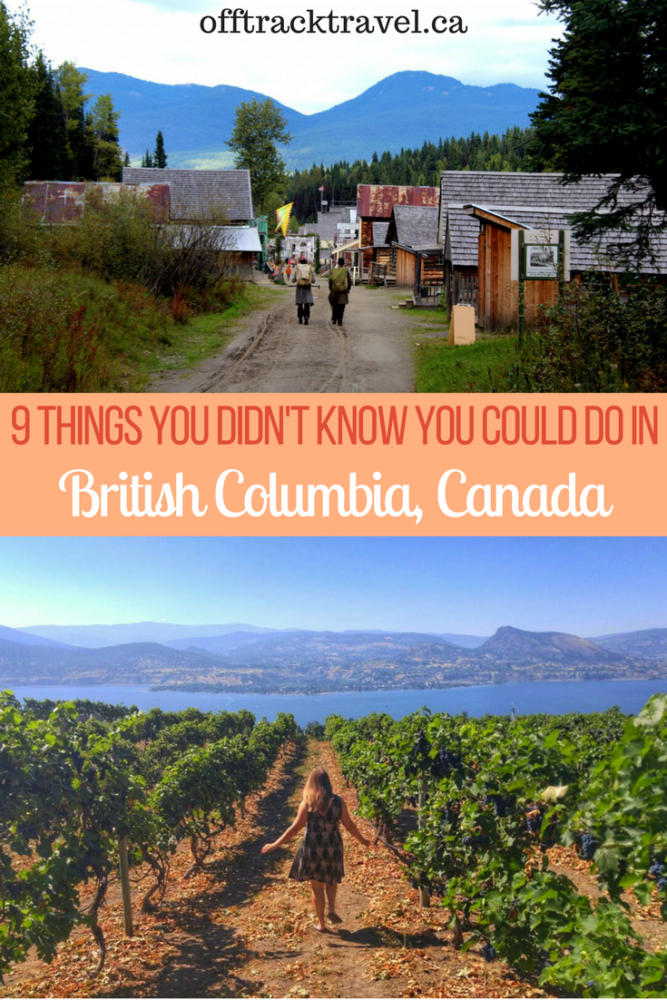 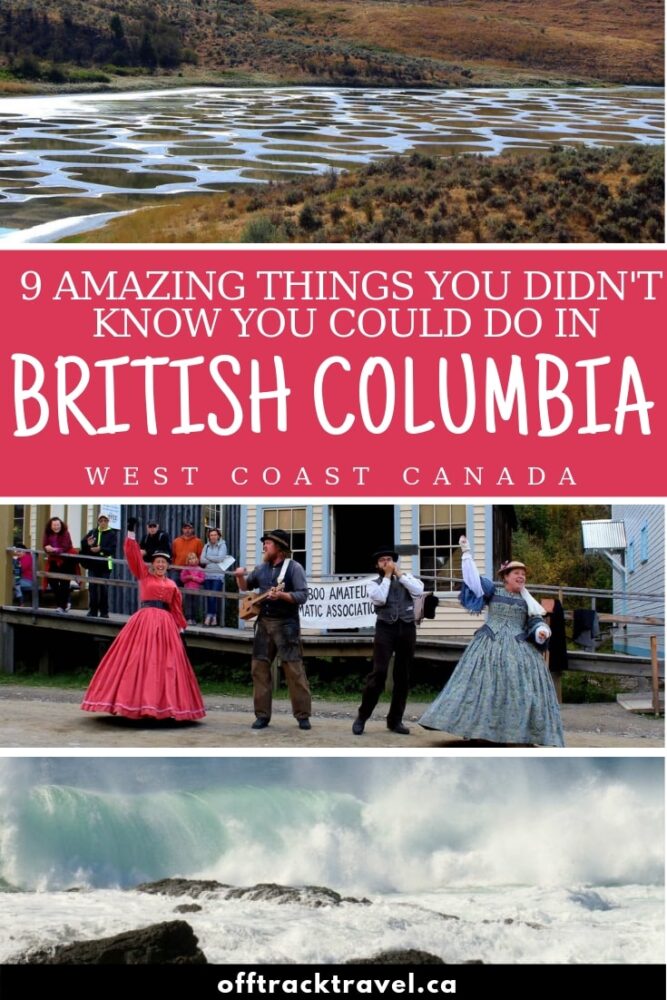 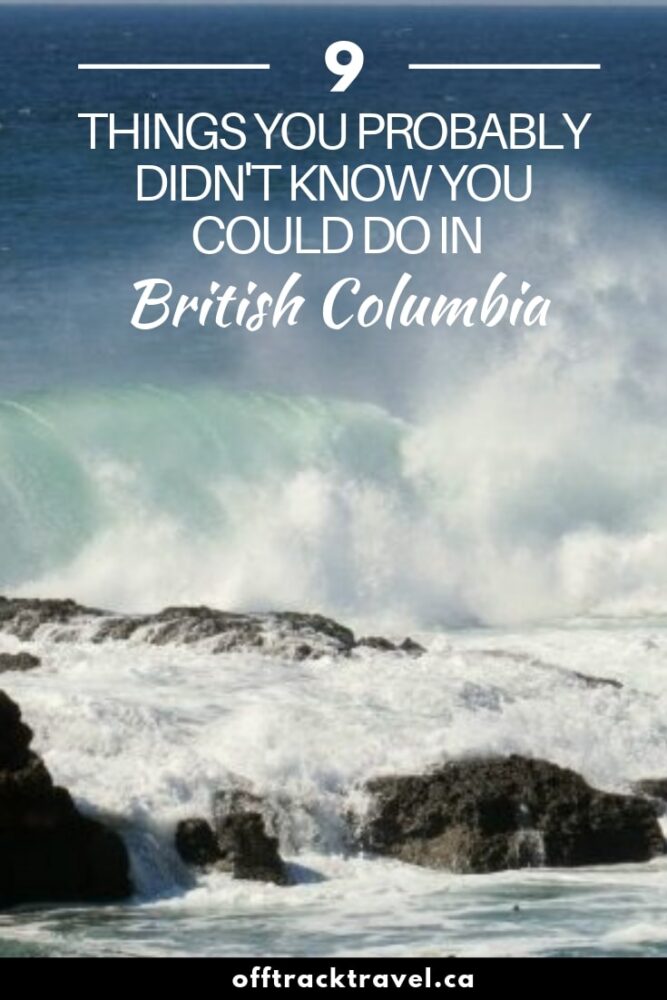